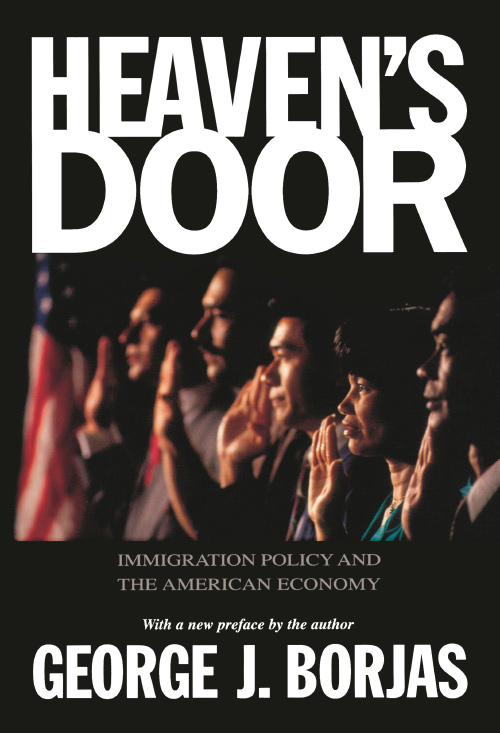 George J. Borjas, the author of Heaven’s Door, belongs to a small but influential group of Americans, namely, the anti-immigrant immigrants. Like another well-known member of the group, the writer Peter Brimelow, Borjas seems to believe, roughly speaking, that immigration to the United States was generally good and productive until the day after he arrived, when it started having all sorts of adverse effects. In reaching his conclusions, Borjas cleverly and industriously engages in an intellectual balancing act of Herculean proportions.

First, in order to establish his bona fides to his fellow academic economists, Borjas pays lip service to one of the few virtually universally accepted propositions in economics, dating all the way back to Adam Smith and David Ricardo: the international movement of goods, services, people, and ideas is welfare enhancing for the world in general and for both the giving and receiving nations in particular. Hence, immigration has net benefits for the citizens of the United States. But Borjas declares those net benefits to be trivial.

Second, having established that he is no sort of anti-immigrant nationalist, Borjas then appeals to the left-liberal political orientation of most American academics. Immigration, he claims, increases the size of the economic pie a little bit, but the bad guys (capitalists, high-income workers) get all the gains and much more besides, whereas the good guys (low-income, low-skilled workers) get the shaft. Third, appealing to the prejudices of less educated blue-collar workers, Borjas introduces considerations of ethnicity and race, showing that the recent immigrants, most of them from the Third World, are not as desirable for America as the earlier immigrants, who were predominantly of European background.

Borjas is extremely clever, sometimes almost brilliant, and he almost succeeds in convincing us with his rhetorical tour de force. We are beguiled by his frequent appeal to facts and by his reasonable statements that people of goodwill can differ owing to their differences regarding the proper goal of immigration policy. Yet as academics such as Barry Chiswick and Jagdish Bhagwati have observed with regard to this book or other research, Borjas’s “facts” are often highly distorted or selective, and his interpretations of them always seem to be slanted heavily to favor his views supporting significant immigrant restriction.

As early as page 12, Borjas argues that the net annual gains to Americans from immigration are only $8–$10 billion a year, a trivial 0.1 percent of GDP. For the moment, let us accept these numbers (as did the National Academy of Sciences in its largely pro-immigration 1997 report). An annual welfare gain of $10 billion means that the present value of the future welfare benefits from the current stock of immigrants is perhaps $250 billion (assuming the typical immigrant has a life expectancy of perhaps thirty-five to forty years in the United States), or about $1,000 for every native-born man, woman, and child living in the United States. That is not a trivial amount, and policy changes that enhance that “immigrant surplus” arguably could produce tens if not hundreds of billions of dollars of welfare gains to the American peoplenot bad for a few legislative initiatives. What Borjas sees as gains of only $30 to each American ($8 billion divided by 275 million), I see as a net addition to welfare currently worth hundreds of billions of dollars.

Yet it turns out that even the $10 billion estimate is highly speculative. Borjas himself refers to it as a back-of-the-envelope calculation that depends on a variety of factors, including the sensitivity of native-born wages to the presence of immigrants. It turns out that Borjas’s calculation assumes that immigration does not alter the capital stock of the nation, a dubious assumption at best. Moreover, it ignores the possibility of positive spillover effects of immigration. For example, the conclusions change significantly if there are economies of scaleif output increases faster than the inputs (including immigrant labor) used in the production process. The late Edward Denison, in his multitude of growth-accounting studies, asserted that such scale economies existed and were moderately substantial. Moreover, Borjas acknowledges but ultimately ignores all sorts of secondary and tertiary effects of immigration. For example, William Hutchinson and James Dunlevy of Miami University have recently provided convincing evidence that immigration has led historically to increases in the volume of international trade. Because such trade promotes efficiency and enhances output, this effect is a positive “spillover” of immigration not considered in Borjas’s simplistic, static, partial-equilibrium calculation. Moreover, Borjas’s alleged wage-depressing effects of immigration would lead to increases in profits and the rate of return on capital, which in turn would affect stock market wealth and have further effects on consumption spending, saving, capital imports, exchange rates, and no doubt numerous other things. These things are ignored because they are not easily measured.

Borjas also reaches dubious conclusions in other areas. He distorts history by echoing Brimelow’s description of the post-1965 immigration as the Second Great Migration, following the (first) Great Migration from 1880 to 1924. Yet immigration’s impact on American society surely does not relate primarily to the absolute number of newcomers but rather to the size of immigrant flows relative to the existing population. Using an absolute approach to measurement, as Borjas does, one might conclude that the Revolutionary War was trivial in importance compared with, say, the Vietnam War, because it cost much less and involved a smaller absolute loss of life. By a more appropriate, relative standard of measurement, the immigration of the 1840s and 1850s had far greater impact on society than today’s immigration has. For example, during many years in the 1850s, ten or more immigrants arrived annually for every thousand native-born persons, a flow that was roughly duplicated in the immigration early in the twentieth century. The modern-day immigration rates, however, are only about four immigrants per thousand native-born persons, or less than half of the levels prevailing nearly a century ago. To call current immigration the Second Great Migration but not to designate the inflows during the last pre–Civil War decade as “great” fundamentally misinterprets the American experience.

Nowhere is the selective use of evidence clearer than with regard to Borjas’s conclusions about the impact of immigration on native-born wages, which he now views as quite substantial. As he admits, in 1990 he concluded that “the methodological arsenal of modern econometrics cannot find a single shred of evidence that immigration has a sizable adverse impact on . . . earnings” (p. 62). The National Academy of Sciences reached similar conclusions in its 1997 report. Borjas actually presents the results of two major studies that used what he calls “spatial correlations” and concluded that the wage effects of immigration are small. One of those studies was co-authored by Borjas himself in 1997, just two years prior to the publication of the book under review. Yet the Borjas of 1999 concludes that “the spatial correlations are completely uninformative” (p. 73). Will the real George Borjas please stand up?

Borjas alleges that showing that wages in immigrant-intensive areas have not declined relative to wages in areas with little immigration proves little, because immigration induces natives to move to less immigrant intensive areas. The adverse wage effects are thus spread out, rendering spatial correlations worthless. Certainly immigration has spillover effects (which in other contexts Borjas prefers to ignore), but the empirical evidence supporting Borjas’s 1999 claim is slim. This matter becomes important later in the book, when Borjas claims that immigration may have lowered wages of native-born Americans by 3 percent, or about $160 billion. This negative impact on wages leads him to support greater immigrant restriction.

So it goes throughout the book. Previously in this journal (“The Immigration Problem: Then and Now,” Winter 2000), Lowell Gallaway, Stephen Moore, and I demonstrated some problems with Borjas’s conclusion about the alleged high use of welfare by immigrants, a position also rendered less valid by federal welfare reforms that explicitly limit immigrant access to welfare. Space limitations preclude a detailed critique of Borjas’s conclusions on this and other issues, including the crucial issue of economic assimilation, about which, again, Borjas tends to interpret the evidence in the most negative possible light. For example, instead of stating that within a generation, half of the earnings differential of a typical ethnic group relative to the native population is eliminated through labor-market assimilation, he tends to stress that half the differential remains, implying “stickiness” in markets.

I do not mean to suggest that everything in the book distorts reality or that Borjas does not make some useful and sensible observations. He is right, for example, in pointing out that there has been some relative decline in immigrant skills since 1960 (but 1960 was hardly a typical year, because immigrants at that time constituted an unusually low fraction of the population owing to the immigrant restriction after 1924), although again he tends to put an excessively negative interpretation on that decline. (After all, many generations of Americans have complained about the same phenomenon, with no apparent long-term ill effects for the nation.) His comments on the critical importance of English comprehension for immigrant economic success are on target, as are his comments on the adverse impact of bilingual education programs.Heargues that special federal programs to assist refugees help to inculcate a welfare mentality and to discourage assimilation well-taken points.

In the end (chapter 11) Borjas thinks there is too much immigration, despite the net positive benefits it provides for the economy, given its alleged income-distributional effects (implicit is Borjas’s value judgment that too much income presently goes to upper-income groups). He suggests reducing legal non-refugee immigration by more than one-third, to 500,000 per year (p. 202). Just as important to Borjas is that too many immigrants are unskilled.

Gary Becker and others (myself included) have suggested using markets to allocate immigrant visas if limits are to be imposed. After spending more than 175 pages waxing eloquent about labor markets and how immigration affects them, Borjas audaciously declares that “many personsmyself includedfeel there are some things that should not be for sale. . . . American citizenship should not be sold in the open market” (p. 179). Rather, he favors a point system, whereby government bureaucrats determine whom to admit, using multiple criteria such as education, age, and occupation.

Markets cannot be trusted, but bureaucrats can. Borjas is afraid that, with a market allocation of immigrant entry, potential employers of unskilled workers would buy up the visas, despite the lack of one scintilla of evidence and despite the fact that economically it makes more sense for employers of skilled workers to purchase scarce visas, because the visas are more valuable the more productive the prospective worker is. Still, Borjas believes policy makers can outguess markets in deciding what form of immigration enhances the national welfare.

Even if Borjas’s “evidence” is largely correct, one could argue just as persuasively for expanding immigrant admissions (given the positive output effects) and for using market criteria to sell visas. If the United States sold 1.5 million visas a year at $10,000 each in the open market, it could offer each American a reduction in his income taxes of about 2 percent (or $200 to someone paying $10,000), which could be explicitly stated to be a “tax reduction due to immigration.” This no doubt would diminish nativist hostility to immigration and eliminate much if not all of any alleged taxpayer burden that immigration produces. If visas were market-based, I would predict, the skill levels of arrivals would rise sharply as well.

George Borjas is an industrious and articulate scholar, no doubt America’s most prolific researcher on immigration. Yet, in large part, his book combines bad history, dubious economics, and poor public-policy prescription. Under Borjas’s proposed policies, many immigrants (including most likely himself) would have been denied the opportunity to improve themselves and contribute to the success of this nation. Enactment of such policies would endanger the morally and economically uplifting American tradition of offering a home to the ambitious and the needy of the world.