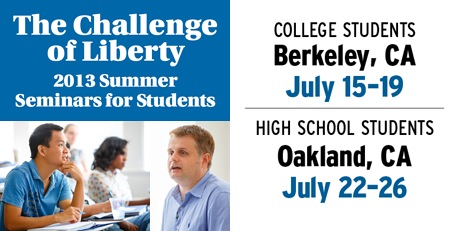 We are delighted to announce that John Stossel’s producers at Fox Business Network are offering free tickets to attend the July 11th taping of his popular television show at 7:30 P.M.! FreedomFest will take place at Planet Hollywood Resort and Casino in Las Vegas, July 10-13.

This special show will feature an interview with Independent Institute Senior Fellow Benjamin W. Powell. The topic: currency debasement and price controls in Ancient Rome and in modern America.

In addition, be sure to catch these important panels featuring Independent Institute fellows:

FreedomFest is not to be missed. Attending this special taping of Ben Powell on Stossel will make an excellent program even more memorable. And please visit the Independent Institute at Exhibit Booth #105!

Please invite all your friends, relatives and colleagues to attend. All they have to do to receive free tickets is email [email protected] with the subject line, “FREEDOMFEST SHOW TICKETS,” and list the names of anyone who wishes to come. Please also arrive early (before 7 pm) to get good seats in the Celebrity Ballroom. And, parking is free at Planet Hollywood.

Economic competition in a free market encourages improvements in quality and reductions in price. Conversely, barriers to competition hamper innovation and keep prices from falling. This is one reason why consumers of forest products—builders, in particular—should be leery of new efforts by some environmentalists and government regulators to favor only one of the three private organizations that currently certify timberland management that meets specific sustainability standards. By promoting the Forest Stewardship Council (FSC) above the other groups—including potentially mandating its standards throughout the private sector—regulators may end up retarding innovation in sustainable forestry.

But there’s another cause for concern about favoring or mandating the FSC’s standards: massive job losses. “A study released by EconoSTATS concludes that an FSC monopoly would cost 31,000 jobs in Oregon and another 10,000 in Arkansas, including those of foresters and tree farmers, but also millworkers, truckers, contractors, and suppliers,” writes Independent Institute Senior Fellow William F. Shughart II.

One reason for the potential job losses, Shughart explains, is that the FSC maintains less stringent standards for timberlands overseas than for those in the United States. Therefore “a public policy granting a monopoly to the FSC label would be equivalent to favoring foreign timber over U.S. timber,” Shughart continues. “American building markets would be closed to American timber unless landowners here bore the cost of complying with standards that the rest of the world would not necessarily have to satisfy.”

Having traveled to the Middle East five times since he replaced Hillary Rodham Clinton as Secretary of State in February, John Kerry seems determined to renew peace talks between Israelis and Palestinians before the United Nations debates the topic this coming September. But trying to bring the two parties to the bargaining table isn’t cheap: The White House seems to have offered Israel stronger security guarantees if it will resume peace talks.

According to Independent Institute Senior Fellow Ivan Eland, trying to broker peace between Israelis and Palestinians is a waste of time that fails to serve genuine U.S. interests. One reason is that a lasting peace seems highly improbable, given the attitudes of the current leadership on both sides of the divide. But a more fundamental reason is that the strategic argument for U.S. involvement is extremely weak regardless of the attitudes of the Israeli and Palestinian leadership. For example, brokering a peace agreement does not enhance U.S. “energy security” because Persian Gulf oil is not a unique resource with “strategic” significance; the cheapest way to get adequate oil supplies is for U.S. consumers to acquire it in the marketplace. Eland explains this point thoroughly in No War for Oil: U.S. Dependence and the Middle East.

Two other pillars of U.S. policy regarding the Middle East also rest on shaky foundations: Washington’s subsidies for Israel don’t enhance U.S security—they weaken it. Also, the notion that U.S. involvement in the region can hasten the spread of liberal democracy is a pipedream—as illustrated most recently in Cairo. Writes Eland: “The lesson from this messy process [of U.S. interventionism] is not that the United States should intervene and remain until liberal democracies take hold in developing nations, but that the process is so chaotic that the United States should stay out of these nations, especially in the Middle East.”

U.S. Obsession with the Importance of the Mideast and Solving the Israeli-Palestinian Conflict, by Ivan Eland (7/5/13)

4) Be Brave and Champion a Free Society

F. A. Hayek gave lovers of liberty a critical piece of advice: to help bring about a free society, one must captivate the intellectuals by putting forth a grand vision for society. Focus on ideals. Don’t get bogged down in public-policy minutia. Think big. And never compromise your principles for political gain: any “gains” will be short-lived, and you’ll have lost an opportunity to promote valid principles.

Hayek spelled out this advice in “The Intellectuals and Socialism,” a brilliant essay first published in the University of Chicago Law Review in 1949. Independent Institute Senior Fellow Lawrence J. McQuillan, the new director of the Center on Entrepreneurial Innovation, reminds us of the importance of Hayek’s sage counsel in a recent piece commemorating Independence Day.