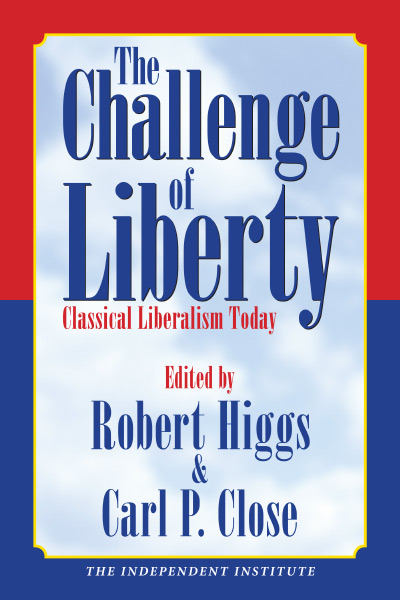 • “The founding of the American Republic and to varying degrees the 19th century constitutions of many European states, along with the relative peace, growing international trade, and buoyant spirit of progress and optimism that spread across Europe and beyond before World War I, constituted victories for classical liberalism.... As the works of the classical liberal economists were disseminated across the Western world, their enemies took note.” —Robert Higgs and Carl P. Close (Introduction)

• “Classical liberals...quite literally went to sleep during the decade of the 1980s, especially after the death of socialism both in idea and in practice. The nanny-state, paternalist, mercantilist, rent-seeking regimes in which we now live emerged from the vacuum in political philosophy.”—James M. Buchanan (ch. 1)

• “Locke tried with his innocent-looking proviso to prove the legitimacy of ownership and succeeded in undermining its moral basis. John Stuart Mill thought he was defending liberty, but he ended up shackling it in strands of confusion.”—Anthony de Jasay (ch. 4)

• “Liberty and dignity complement one another. Their mutual dependence helps to explain why the price of liberty is vigilance. Encroach on liberty this morning and you cause an erosion of dignity this afternoon, which itself will generate a new encroachment on liberty tomorrow, and so on.”—Daniel B. Klein (ch. 6)

• “No government, no matter how undemocratic, rules for long through brute force alone. Enough of its subjects must accept its power as necessary or desirable for its rule to be widely enforced and observed.” —Jeffrey Rogers Hummel (ch. 11)

Classical liberal pioneers such as John Locke and Adam Smith stressed the inherent worth of the individual, inalienable rights, and the benevolent consequences of the cooperative, peaceful pursuit of one’s own happiness. These ideas became the intellectual scaffolding on which stood the political freedom, civic participation, and growing prosperity that came to define the West. Yet after classical liberalism’s 19th-century high water mark, many influential thinkers came to favor coercive egalitarianism, empire, and central planning at the expense of individual liberty, personal responsibility, private property, natural law, and free institutions.

In recent years, however, a renaissance in classical liberal thought has begun. In The Challenge of Liberty: Classical Liberalism Today, edited by Robert Higgs and Carl P. Close, eighteen economists, historians, and philosophers re-establish the ideals of classical liberalism and show how it supports such pillars of free societies as individual rights, human dignity, market processes, and the rule of law.

What do classical liberal scholars see as the main challenges confronting their movement? What do classical liberals think they should emphasize in order to win more adherents in the battle of ideas? How can their “intellectual” gains best be translated into “practical” gains in the real world? The questions are timely because despite the collapse of the Soviet bloc and the abandonment of collectivist economic planning in the 1990s, classical liberalism must overcome an uninspiring political pragmatism that has contributed to a resurgence of statism and further entrenchment of special-interest groups.

For classical liberals to strengthen their public following, reverse the trend toward statism and promote liberty, they should articulate a moral vision as compelling as that of the early classical liberals’ antislavery campaigns, argues Nobel Prize–winning economist James M. Buchanan, in chapter 1, “The Soul of Classical Liberalism.” Dwight R. Lee replies to Buchanan in chapter 2, “Economics without Romance,” arguing that classical liberals should resist depictions of a future classical liberal utopia and instead simply infuse their freemarket economics with a greater sense of urgency.

Classical liberals can gain traction in the scholarly world by correcting misconceptions about their intellectual heritage. Both the left and the right, for example, have recently attacked the classical liberals for their alleged assumptions of “hyperrationalism” and “extreme atomism.” But, as Steven Horwitz explains in chapter 3, “From Smith to Menger to Hayek: Liberalism in the Spontaneous-Order Tradition,” those criticisms fall flat when directed at the classical liberals of the Scottish Enlightenment tradition, who argued that many useful human institutions (including language and the market) are not the result of conscious design but are unintended consequences of social interaction. In chapter 4, “Liberalism, Loose or Strict,” Anthony de Jasay explains how genuine liberalism was corrupted by utilitarian doctrines in the 19th century, paving the way for contemporary welfare-state liberalism. For genuine liberalism to resist anti-liberal ideas, it must affirm vigorously two basic principles: the presumption of freedom and the rejection of the rules of submission to political authority, he argues.

Freedom and the Moral Society

In chapter 6, “Liberty, Dignity, and Responsibility: The Moral Triad of a Good Society,” Daniel B. Klein argues at length that liberty and individual responsibility preserve and affirm the dignity of the individual. Furthermore, understanding the interdependence among liberty, dignity, and responsibility is essential for broadening support for a free—and good—society. In chapter 7, “Moral Capital and Commercial Society,” Suri Ratnapala argues that commerce coevolves with moral rules and leads not only to prosperity but also to the accumulation of moral capital—the disposition to moral conduct—as Adam Smith and David Hume observed.

Constitutionalism, a product of classical liberalism, is a worldwide work in progress: Although every country in the world claims to have a constitution, most of the world’s people do not live under constitutional government. Only societies that have adopted a particular conception of the rule of law have secured constitutional government and therefore freedom, argues Suri Ratnapala in chapter 9, “Securing Constitutional Government.” Whether citizens of China become free, for example, hinges on whether their government adopts a constitution that protects persons and property against arbitrary government power and lays a framework for freedom under the rule of law. Just as Adam Smith articulated the principles of liberalism in the West, so the wisdom of Lao Tzu can play a similar role in China’s transition from market socialism to “market Taoism,” explains James A. Dorn in chapter 10, “The Primacy of Property in a Liberal Constitutional Order: Lessons for China.”

The rule of law is not the only pillar of constitutionalism; other ideas must also be widely understood—and safeguarded with eternal vigilance. In chapter 11, “The Will to Be Free: The Role of Ideology in National Defense,” Jeffrey Rogers Hummel argues that the role of ideology in determining military outcomes—both between nationstates and between individuals and the nation-state—has been long overlooked. In chapter 12, “The Inhumanity of Government Bureaucracies,” Hans Sherrer argues that irresponsibility, moral relativism, ruthless opportunism and sadism are the predictable outcomes of the politicization of society and the government bureaucracy it fosters.

Classical liberalism has a strong affinity for freedom of conscience, as against intellectual conformity. The early classical liberals’ insistence on cognitive independence gave rise to protections of freedom of speech and the separation of church and state in the United States. In chapter 13, “Freedom of Religion and Public Schooling,” James R. Otteson argues that like coercive funding of religion, coercive funding of education violates freedom of conscience, politicizes and trivializes important values, and violates rights.

In chapter 14, “Is National Rational?,” Anthony de Jasay argues that the case against nationalism, historically one of the greatest threats to individualism, is stronger than most classical liberals realize. In chapter 15, “A Critique of Group Loyalty,” Laurie Calhoun complements de Jasay’s analysis by arguing that a commitment to group loyalty must come at the expense of one’s other principles and thus is irrational for moral absolutists and moral relativists alike. A grave and gathering new threat to individualism and liberty has met little organized opposition, according to Thomas Szasz in chapter 16, “The Therapeutic State: The Tyranny of Pharmacracy.” Joining the traditional rationalizations for state coercion—“God’s will,” “the consent of the governed,” and “social justice”—comes a fourth: “coercion as treatment,” Szasz explains.

Classical Liberals Respond to Their Critics

The Challenge of Liberty concludes with replies to recent criticism leveled against classical liberalism. In chapter 17, “What Is Living and What Is Dead in Classical Liberalism?,” Charles K. Rowley explains Robert Nozick’s and John Gray’s movement away from classical liberalism as a shift from a commitment to the philosophy of John Locke toward that of Thomas Hobbes. In chapter 18, “The Ways of John Gray: A Libertarian Commentary,” Daniel B. Klein argues that Gray has misrepresented classical liberal ideas and has failed to hold his own ideas to the same standards that he demands of his classical liberal opponents.

John Rawls, perhaps the most influential political philosopher of the 20th century, barely broached the subject of property and ownership. Because this topic is so vital in the real world and in the history of political thought, Rawls’s theory of “justice as fairness” must be considered very incomplete, argues Quentin P. Taylor in chapter 19, “An Original Omission? Property in Rawls’s Political Thought.” In chapter 20, “Has John Roemer Resurrected Market Socialism?,” Michael Wohlgemuth argues that the “market socialism” espoused by economist John Roemer is vulnerable to the same devastating criticisms against socialism leveled in the 20th century by Austrian school economists Ludwig von Mises and F. A. Hayek, who forcefully argued that a smoothly operating economy requires free-market pricing, profit-and-loss incentives, capital markets, and private property.

Robert Higgs is Senior Fellow in Political Economy at The Independent Institute, author of Against Leviathan and Crisis and Leviathan, and editor of the scholarly quarterly journal, The Independent Review.

Carl Close is the Academic Affairs Director of the Independent Institute in Oakland, Calif. and assistant editor of The Independent Review: A Journal of Political Economy.

Buy The Challenge of Liberty