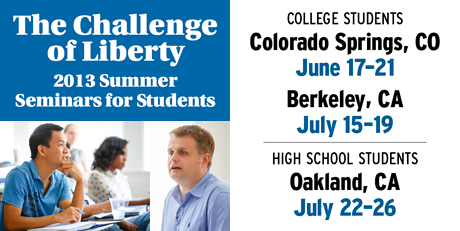 Is the United States following the Roman Empire down the road to ruin? If so, how might we change direction and ensure the success of the American Experiment, with liberty, prosperity, and peace for all? Please join us at FreedomFest in Las Vegas, July 10–13, and find out! Some of the Independent Institute’s most prolific Fellows will be on hand to explain how liberty and free markets can revive the U.S. economy. And please visit us at the Exhibitors Hall. (Our booth will be at Exhibit #217.)

FreedomFest bills itself as “the world’s largest gathering of free minds.” We agree. And if you’ve never attended before, we’re sure you’ll find the speakers intellectually stimulating and the energy that comes from seeing so many interesting and dedicated people positively exhilarating! We’re especially delighted to participate on the following panel on Friday, July 12, at 9:00 a.m. at the Palace Ballroom:

“No More Caesars: How Liberty and Free Markets Can End the Economic Crisis”

2) Will the Latest Whistleblower Become a Martyr?

The big news this past week was, of course, the revelation about the National Security Agency/Verizon cyberspying program. Edward Snowden, the contract employee who leaked details of the program, called PRISM, to the Washington Post and the Guardian, has been compared to Daniel Ellsberg, the former RAND analyst who leaked documents to the press revealing the extent of U.S. deception of the public about the Vietnam War. Ellsberg ultimately escaped prosecution due to government malfeasance. Does anyone believe that Snowden will be as lucky? Independent Institute Senior Fellow Robert Higgs certainly doesn’t.

“I have no idea what the gang is concocting as a means of destroying Edward Snowden, but I have no doubt whatsoever that the wheels of injustice are spinning furiously in Washington, DC, and Langley, Virginia,” Higgs writes at The Beacon. “If you are betting on this heroic young man’s living another five years, insist on heavy odds.”

Higgs is outraged that telling the truth about the U.S. government’s activities risks criminal prosecution. And he’s appalled that much of the public seems to believe “officially promulgated poppycock” about Uncle Sam’s supposed need for so much secrecy. “Such a cosmic Stockholm syndrome more than boggles the mind,” he writes. Meanwhile, Independent Institute Senior Fellow Ivan Eland argues on RT that the policymakers who authorized the surveillance program are violating the Constitution’s prohibition against mass searches for evidence of unspecified crimes; the nation’s charter grants them no exception for national security. “If they want to do it,” he says, “they have to amend the U.S. Constitution.”

What the State Fears Most—Revelations of the Truth about the State, by Robert Higgs (The Beacon, 6/10/13)

What Would Obama Have Done with the Leaks in the Pentagon Papers?, by Melancton Smith (The Beacon, 6/10/13)

Verizon Surveillance: Do We Feel Safer?, by Melancton Smith (The Beacon, 6/7/13)

Is China an emerging threat to the United States? Recent news reports have caused some in the U.S. foreign-policy establishment—many of them unapologetic Iraq War hawks looking for the Next Big Enemy—to wave the warning flags. One report was about China’s military hacking into U.S. government and business computer systems. Another involved China’s contracts to develop Iraqi oil. A third discussed China’s purchase of Russian military equipment. According to Independent Institute Senior Fellow Ivan Eland, these and similar stories have been blown out of proportion.

Eland emphasizes the huge technological advantage of the U.S. military. “Chinese yearly defense spending is still only a fifth of that of the United States,” he writes, “and the results of that annual disparity have accumulated over many years in a vastly superior U.S. military force.” Moreover, some of China’s military purchases, such as its purchase of a used Ukrainian aircraft carrier, reveal Beijing’s inexperience and/or domestic political considerations unrelated to power projection.

One of the biggest misconceptions involves China’s forays into energy development abroad—mostly recently in Iraq. “Because a worldwide oil market exists and any new petroleum being produced anywhere lowers the price for everyone,” Eland writes, “Chinese state-owned companies may be indirectly subsidizing U.S. oil consumers by bringing to market oil deposits that would be uneconomical for private firms to find and pump. Of course, implicitly, a worldwide oil market would also obviate the need for the military forces of the United States, China, or any other nation to ‘secure’ oil.”

Do the recent congressional hearings into IRS harassment of conservative organizations portend a long, hot summer for the agency’s leaders and staff? Perhaps. MyGovCost Policy Direct Cherylyn LeBon makes the case in recent piece at the MyGovCost blog.

LeBon examines allegations made by groups such as Linchpins of Liberty, the Coalition for Life, and the National Organization for Marriage, along with reports of lavish spending on IRS conferences. No wonder a poll conducted by the New York Times/CBS News found widespread bipartisan disdain for the agency’s reputed harassment of policy groups. IRS officials, LeBon argues, should prepare for a long, hot summer.

“The hearings will continue and perhaps, more revelations of targeting conservative groups, misconduct, and wasteful spending may be revealed,” she concludes.

A Long Hot Summer: The IRS and the Targeting of Conservative Groups and Beyond, by Cherylyn LeBon (MyGovCost News and Blog, 6/6/13)

MyGovCost.org—Learn What Washington, DC, Is Costing You!

What Would Obama Have Done with the Leaks in the Pentagon Papers?
Melancton Smith (6/10/13)

A Long Hot Summer: The IRS and the Targeting of Conservative Groups and Beyond
Cherylyn LeBon (6/6/13)

Art Carden, in Forbes, on economics, apple, and fitness