Reporting about the National Security Agency surveillance leaks has conflated two programs: one tracks the phone calls of probably most Americans, whereas the other, named Prism, monitors the contents of some Americans’ emails and other electronic data. The former (“traffic analysis”) is arguably worse than the latter (“content analysis”), at least based on the limited information available, according to Independent Institute Senior Fellow Ivan Eland. But the most important thing to keep in mind is that each program violates the Fourth Amendment’s prohibition against mass searches and seizures related to the unspecified crimes of unnamed persons.

The NSA apparently received court authorization to collect and analyze the “metadata” of Americans’ phone records. But this means only that the court either has a promiscuous standard of “probable cause” (since the majority of Americans can’t be suspected terrorists) or that it simply didn’t bother to apply a standard at all, Eland argues. Prism may also have passed through the FISA court, but this program also appears to be unconstitutional. The suggestion that the NSA’s electronic dragnet has foiled three, as yet unidentified, terrorist plots is irrelevant from a constitutional standpoint: The Fourth Amendment makes no exceptions for national security.

Supporters of the NSA’s Orwellian and unconstitutional surveillance programs claim that civil libertarians’ outrage and worries are unfounded. But in fact they’re the ones guilty of groundless hysteria. “In the most idiotic comment on the phone-records program, Senator Dianne Feinstein (D-Calif.), the totally co-opted chairperson of the Senate Intelligence Committee, insisted that the program was needed because any American could become a future terrorist,” Eland writes in his latest op-ed. “In today’s politically correct world, it is nice that Big Brother now has a Big Sister.”

NSA Snooping on Americans Is Unconstitutional and Outrageous, by Ivan Eland (6/11/12) 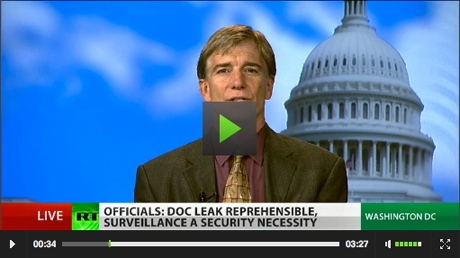 No War for Oil: U.S. Policy and the Middle East, by Ivan Eland

The Stalinization of Amerika, by Mary Theroux (The Beacon, 6/17/13)

Some states are refusing to expand Medicaid, even though the feds have promised to fully fund an expansion for a few years. New York Times columnist Paul Krugman is apoplectic. In a recent piece, he cited a study estimating that a Medicaid expansion would prevent 19,000 deaths per year. What he didn’t say about the study’s author is telling.

The estimate comes from a report by Katherine Baicker and her colleagues at RAND. Since then, Baicker has co-authored what Independent Institute Senior Fellow John C. Goodman calls a “much more careful study”—the recently famous study on Oregon’s Medicaid experiment. “That study,” Goodman writes, “found no effect of Medicaid (versus uninsurance) on health! Further, the Oregon study is consistent with most of the serious literature on this subject, including a very famous study by the RAND Corporation itself.”

That finding from Oregon came as a surprise, but it shouldn’t have. One might have predicted such an outcome based on the low rates that Medicaid pays providers compared to what private insurers pay: 38 percent in California, 33 percent in New Jersey, 29 percent in New York, 59 percent nationwide. You get the idea. Would moving low-income patients into state-created exchanges, where they could purchase subsidized insurance, make more sense than enrolling them in Medicaid? Not necessarily. In some states the subsidized plans may pay even less than Medicaid, Goodman notes. If the Obama Administration wants to look for a better reform worth emulating, it should consider block grants to states. “Rhode Island has shown that Medicaid block grants can save money and improve care,” Goodman writes. “It’s time to allow other states to have a shot at similar reforms.”

“Alvaro Vargas Llosa’s timing is as superb as his book, which lands smack in the middle of a feverish Washington debate over America’s most recent arrivals,” so writes Jason L. Riley of the Wall Street Journal in his glowing review of the Independent Institute’s new book Global Crossings. Riley describes the current debate on immigration as a “Republican family squabble” between free marketers who see immigrants as catalysts for economic growth and innovation and restrictionists who believe immigrants threaten American values and burden entitlement programs. In Global Crossings, Riley writes, Alvaro Vargas Llosa, Senior Fellow at the Independent Institute, provides a “thoughtful critique of the restrictionists from the standpoint of a fellow conservative.”

Vargas Llosa argues that Republicans need look no further than Ronald Reagan to rediscover their pro-immigration roots. “Reagan signed the 1986 amnesty, mocked ‘the illegal alien fuss,’ championed guest-worker programs, and frowned on barricading the southern border,” Riley summarizes in his review. Vargas Llosa shows how throughout history those who came first always feel uneasy about those who follow: the “past immigrants were good, current immigrants are bad” viewpoint. And Vargas Llosa presents persuasive evidence that America is assimilating new immigrants as well as it did in the past. For example, subsequent generations of Latino immigrants are learning English, increasing their education levels, and climbing the economic ladder.

Riley’s review ends with policy recommendations drawn from the book. Amnesty, argues Vargas Llosa, amounts to “the acceptance by host countries of their failure to match the law with reality, and to establish policies that have long-term horizons and do not need to be constantly overhauled.” Those policies should establish and maintain incentives to attract and integrate immigrants rather than squeezing the flow. Riley chooses to end his review with this passage from Global Crossings: “Immigration is not a threat to culture, the economy, or security. It is, pure and simple, the right to move, live, work, and die in a different place to that in which one was born—the victory of choice over chance.”

Will climate change raise the sea level? If so, by how much? The issue, like many related to global warming, is far from settled. The principal data come from the long-term records, going back to about 1900, from about two dozen stations around the world—not as large a storehouse of information as we would like. Since issuing its first assessment report, the Intergovernmental Panel on Climate Change has reduced its estimated range of sea level rise from 10 to 367 centimeters (published in 1990), to 18 to 59 centimeters (published in 2007)—a lot less than the 600 centimeter (20 feet) rise predicted by Al Gore and James Hansen. But new data and analyses suggest that global warming might slow down a rising sea level, not accelerate it, according to Independent Institute Research Fellow S. Fred Singer.

The observed rise in sea level over the past century—18 centimeters (7 inches)—reportedly comes from two main sources: thermal expansion of the oceans and the melting of continental glaciers. Contrary to popular lore, the polar regions, mostly Antarctica, seem to have helped keep the sea level from rising even more through precipitation and ice accumulation. This was reported in the IPCC’s second assessment (1996). Interestingly, however, it now seems clear that 1 F (0.6 C) warming of the past 100 years doesn’t explain the observed sea level rise. Other mechanisms, including the melting of the West Antarctic Ice Sheet (WAIS), seem to be involved.

If so, then expect sea levels to continue to rise at about the same rate—even though global warming itself could contribute to slowing that rise, via its effect on precipitation and ice accumulation at the poles. “And there is nothing that we can do to stop this future sea level rise!,” Singer writes in American Thinker. “It is as inevitable as the ocean tides. Fortunately, coral reefs will continue to grow, as they have in the past, to keep up with SLR. The rest of us will just have to adapt to future [sea level rise], as our ancestors did some 10,000 years ago. At least we are better equipped with technology to deal with such environmental changes.”

The Stalinization of Amerika
Mary Theroux (6/17/13)

Foundation for Economic Education (FEE) reviews The Power of Habeas Corpus in America: From the King’s Prerogative to the War on Terror by Research Fellow Anthony Gregory