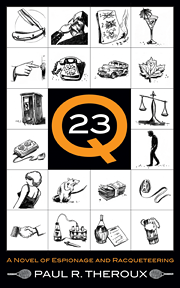 Q-23 is a revolutionary new chemical formula. But Roger Pate, a research chemist who discovers it, does not expect  to be murdered for it. Fortunately his friend, Kurt Strong,  a private investigator, is not naïve about those who prefer squelching innovation that threatens the status quo. But the clock is ticking and both men must anticipate an escalating and violent situation in order to outwit a powerful enemy. Unexpectedly the benign world of research and development takes on a sinister cast and ordinary men must do extraordinary things to survive.

“I have just read Q-23 with pleasure. It is ingenious, well-observed, and specific—the creation of ‘Hair Ban’ is yet another plausible product in fiction, putting me in mind of H. G. Wells’s ‘Tono Bungay’ and Saki’s ‘Filboid Studge.’ My congratulations to my cousin and namesake with my wish that the novel finds many readers.”
—Paul E. Theroux, author of The Great Railway Bazaar, The Old Patagonian Express, The Mosquito Coast, Dark Star Safari, and other bestselling books

“What’s in a name? Great writing has long been associated with the Theroux name. Paul R. Theroux’s novel joins the ranks of Therouxs whose writing is well worth reading. The title of Paul Theroux’s new novel is a very clever play on words. But unlike many books adorned with clever titles, the story embedded in Q-23: A Novel of Espionage and Racqueteering is as clever as the title. I was hooked from the get-go.”
—Kenneth G. Elzinga, Ph.D., author of Murder at the Margin, The Fatal Equilibrium, and A Deadly Indifference

“I have found Q-23 fascinating. I could not put it down and I have taken it everywhere. Paul Theroux has one vivid imagination and yet everything is so plausible. I have really enjoyed the story, especially having been myself in healthcare both in business and government. The book is short as are the chapters, a great formula for a quick, easy, informative and interesting read. Highly recommended!”
—Don M. Newman, former Undersecretary, U.S. Department of Health and Human Services; author, Newman’s Musings: Reflections of a Life

“Q-23 is such a nifty little novel—I loved the happy ending, betrothal, and bad guys thwarted for the rest of their nasty lives. God bless Paul R. Theroux and his great literary imagination.”
—Peter C. S. Theroux, author of Sandstorms

Paul R. Theroux (1922-2017) was born the third of Michigan State University (MSU) professor Frank Theroux’s seven children—all of whom went on to graduate from MSU. The professor’s love of tennis inspired his children to also take up the game—especially Paul, who not only wound up with shelves full of trophies but also an inspiration for this book, Q-23.

Following his years as an Army Air Corps officer in the Pacific during World War II, Paul entered the fire insurance industry in America, working his way up to executive positions with State Farm and other firms. His marriage to the former Marjorie E. Withrow resulted in two sons (David and Gary) and a daughter (Linda) who spent their childhoods in a succession of hometowns. The same wanderlust that drove Paul to move his family six times in twenty years really kicked in after he retired—and became a world traveler.

So how does one combine one’s fascination with adventure, intrigue, mysteries, travel and tennis? Well, if you’re Paul Theroux, you sit down and author this book. An elder of the extended, creative Theroux family, he is a cousin of authors Paul, Alexander, and Peter Theroux.