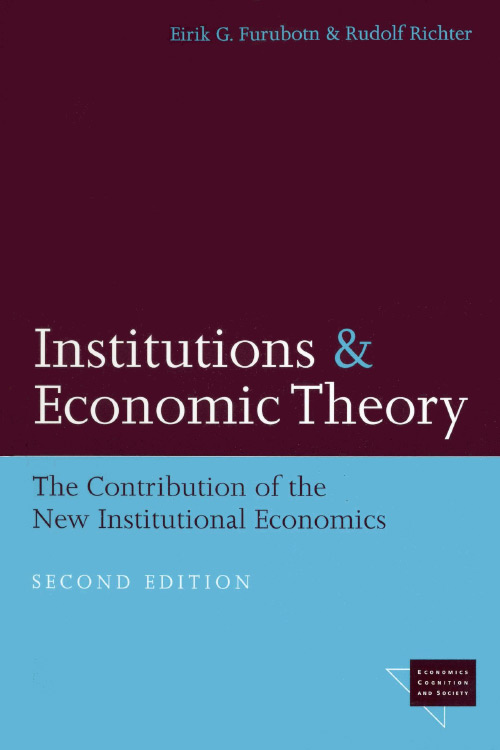 Institutions and Economic Theory
The Contribution of the New Institutional Economics
Eirik G. Furubotn and Rudolf Richter
eTextbook Hardcover Paperback
This book review appeared in the Fall 1998 issue of The Independent Review.

Written by two leading authors in the area, this major work explores at length the “new institutional economics.” Research in this area has become prominent in the social sciences in the 1980s and 1990s. Addressed largely to academic economists and advanced students, the book covers transaction-cost economics, property-rights analysis, and the theory of contracts. The “new institutional” approach embraced here centers on the key concept of transaction costs. By use of this idea, an attempt is made to explain the nature and role of the organizations and institutions of economic life. The approach is much in the tradition of the work of Nobel Laureate Ronald Coase and his well-known and prolific follower Oliver Williamson.

The book is organized into ten substantial chapters. After an introduction, the work moves on to a second chapter on the pivotal concept of transaction costs. Two chapters on property rights follow, then chapters on contract theory, markets, firms, and the state. A final chapter usefully considers possible future developments of the new institutional paradigm.

The exposition is generally clear and helpful, and the volume is an excellent introduction to the literature of the new institutional economics. Each chapter ends with useful recommendations for further reading. As a comprehensive introduction to a particular type of institutional approach, the book cannot be easily faulted.

Another welcome feature of the book is its occasional consideration of the earlier work on economic institutions by the German historical school of economics, which was prominent from the 1830s to the 1930s. Although Furubotn and Richter seem to endorse the old and mistaken prejudice that members of the German historical school were “hostile to abstract theoretical work” (p. 2), the occasional citation of their ideas—including those of Gustav Schmoller, Werner Sombart, and Max Weber—is testimony to their enduring relevance. By contrast, however, Furubotn and Richter pay much less attention to the American “old” institutional school of Thorstein Veblen, John Commons, and Wesley Mitchell, which was dominant in U.S. universities in the first third of the twentieth century. In addition, the authors do not spend much time considering modern alternative explanations of institutional phenomena, outside the transaction-cost paradigm.

Analytically, some of their key definitions are questionable or atypical of the literature. For example, institutions are defined unsatisfactorily as “the rules of the game without the players.” It is difficult to see how rules can be meaningful without human actors! The definition of organizations is likewise contestable: “Institutions together with the people taking advantage of them are called organizations” (p. 7). Institutions are regarded largely as constraints, rather than also as means enabling action: “Individuals ... maximize utility subject to the constraints established by the existing institutional structure” (p. 3). This one-sided view of institutions as mere constraints contrasts with the work of sociologists such as Anthony Giddens and with the work of institutional economists working in the older tradition. In contrast to Furubotn and Richter, those authors emphasize that institutions have a coordinative and cognitive role, thus enabling action rather than merely constraining it. Furubotn and Richter do not accept this richer approach because they are committed to the ontological prior of the free-standing, atomistic, individual agent.

Another disputable example is their definition of a firm: “A firm is understood in this book as a network of relational contracts between individuals ... with the purpose of efficiently organizing production” (p. 272). Despite all the emphasis in the book on contracts and property rights, there is no concept here of the firm as a legal person. The obvious disadvantage of this rather loose definition is that it cannot distinguish between firms and certain other sorts of contractual networks.

Essentially, the analysis in the book stands or falls on the transaction-cost approach that forms its analytical backbone. Much of its argument is along the following lines. First, we are asked to imagine a “frictionless” world without transaction costs. It is then argued that in their absence there would be little basis for many of the key institutions of economic life. If there were no transaction costs, then the organizational structure of the economy would be largely irrelevant. Central planning or market socialism would be as effective or ineffective as true markets. Problems of contract enforcement would largely disappear. In such a world, there would be no economic advantage to private property and markets over, say, collective planning.

However, once we accept the existence of transaction costs, it is argued, we have good reasons to favor one type of institutional arrangement over another. For instance, private property can become advantageous, largely because when contract enforcement is costly, ownership aligns with individual incentives. This argument is very much in the Coase-Williamson tradition.

Regretably, Furubotn and Richter pay little attention to the many criticisms of this transaction-cost argument. Its logical structure is: in an imaginary world without X, institutional phenomena I would be nonexistent or irrelevant. As a result, X explains the nature, existence, or comparative efficiency of I.

Once we have thus stripped this structure bare, we can see a key weakness: I may also depend critically on Y or Z. Hence, if we could imagine a world without Y, institutional phenomena I would be nonexistent or irrelevant. As a result, Y would equally “explain” the nature, existence, or comparative efficiency of I. In other words, this type of demonstration that transaction costs are important does not rule out the possibility that other things have equivalent explanatory importance.

What might Y or Z represent? Take your pick. Trust and power are well-discussed alternatives in the voluminous social science literature on organizations and institutions. Regretably they are not well discussed in Furubotn and Richter’s book.

More specifically, there is an emerging alternative approach to the theory of the firm that is variously described as competence-based or capabilities-based or resource-based. Work in this tradition emanates from the classic works of Edith Penrose (The Theory of the Growth of the Firm. Oxford: Basil Blackwell, 1959) and of Richard Nelson and Sidney Winter (An Evolutionary Theory of Economic Change. Cambridge, Mass.: Harvard University Press, 1982). The work of David Teece, Richard Rumelt, Richard Langlois, Giovanni Dosi, Brian Loasby, and others is also inspired by this tradition. Elsewhere, I have tried to show that the competence-based theory can plausibly explain the nature and existence of the firm as least as well as the transaction-cost approach (see “Competence and Contract in the Theory of the Firm,” Journal of Economic Behavior and Organization 35 [April 1998]:179-201).

Overall, it is a pity that the volume under review did not probe more deeply into the literature on the possible weaknesses of the transaction-cost approach and thereby consider alternative explanations. Nevertheless, the achievements and positive features of the book should not be underestimated. It can be recommended as a comprehensive exploration of the transaction-cost paradigm.

Geoffrey M. Hodgson
University of Cambridge
Economic PolicyEconomyLaw and LibertyProperty Rights, Land Use, and ZoningRegulation
Subscribe Buy This Issue Get the App