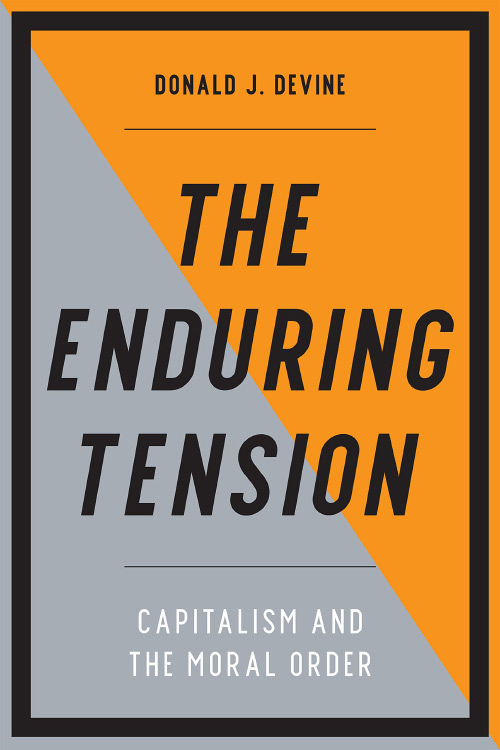 The Enduring Tension
Capitalism and the Moral Order
By Donald J. Devine
Kindle Hardcover
This book review is a web exclusive for the Fall 2021 issue of The Independent Review.

Few scholars, even the critics of capitalism, deny that capitalism has vastly improved people’s lives on material margins. Yet, when people are asked to invoke images of capitalism, they too often describe the Wall Street banks, their recklessness with other people’s money and their many transgressions. People regularly retell stories of big corporations bullying and driving smaller mom-and-pop stores out of business, and of once friendly neighbors growing, at best, apathetic and, at worst, hostile and wary of one another as their wealth increases. Many people, even those who are typically sanguine about capitalism, worry that we grow more selfish, corrupt, and debased as capitalism and capitalist values encroach into spheres of life that they do not belong. They worry that the wealth that societies gain by embracing capitalism comes at a very high moral cost—too high—and call for measures to control capitalism and the market.

Donald J. Devine’s The Enduring Tension: Capitalism and the Moral Order is an attempt to legitimize capitalism on moral grounds by offering a political order that leaves alone or amplifies the socially desirable aspects of capitalism while curbing its morally unsavory or repugnant aspects. The political order that best achieves this, Devine concludes, is a pluralist administration or decentralized federalism, where state governments and local bureaucracies play larger roles in governance and balance the federal government. (A call for a return to a “more personal and local governance of an earlier time,” [p. 266].) Devine frames his argument as a tension between tradition and freedom, i.e., the tension between those values that we used to hold as a society and those values that foster change and innovation. To stress this tension, Devine relies on Pope Francis’s criticisms of capitalism and his call for a reformed, more inclusive capitalism throughout the book. The book is divided into two parts. Part I provides a historical account of Western civilization with a particular focus on the interplay between the economic order and the political order, or rather the historical attempts made by the political order to control the economic order. Part II evaluates some of the past attempts to legitimize capitalism on moral grounds and discusses the practical and philosophical issues that we must grapple with to legitimize capitalism.

Devine’s conclusion—that the only political order that legitimizes capitalism on moral grounds is a pluralist administration—is not inconsistent with polycentricity, a concept championed by Elinor and Vincent Ostrom. In their research, the Ostroms explored the theory and practice of self-governance in polycentric systems and sought to answer a single question: how do real people create and enforce rules that facilitate cooperation and coordination? The Ostroms were dissatisfied with the little faith other scholars and policymakers seemed to have in people’s abilities to solve their own problems. And, because the scholars and policymakers had little faith in people’s abilities, they tended to argue that the only way for people to overcome social dilemmas was through an external authority, whether it be the government or the market. Yet, the Ostroms stressed, there were countless instances of real people and real communities finding ways to overcome their own social dilemmas without once ever turning to an external authority to solve their problems (see, for instance, Elinor Ostrom. 1990. Governing the Commons. Cambridge, UK: Cambridge University Press).

The Ostroms marveled at people’s abilities to navigate within polycentric orders (i.e., systems of multiple and overlapping decision-making authorities that operate autonomously within a shared system of rules) and to self-govern. And, to arrive at a solution that makes sense for their specific community, people need the space to act and discover appropriate solutions. In this way, as Virgil H. Storr, Laura E. Grube and Stefanie Haeffele (2017. “Polycentric Orders and Post-disaster Recovery: A Case Study of One Orthodox Jewish Community Following Hurricane Sandy,” Journal of Institutional Economics 13 [December]: 875-897) pointed out, a polycentric order is analogous to the market in that they are both spontaneous (autonomous agents are free to pursue their own interests while bounded by general rules in both orders) and entrepreneurial (autonomous agents pursing their own interests will drive the process of constant change and adjustment). To the best of my knowledge, the Ostroms never explicitly stated that a society’s political order must be compatible with its economic order. But their collective research clearly demonstrated that a self-governing, democratic community can only ever thrive when its political, economic, social and moral institutions are consistent with and reinforce (i.e., legitimize) one another.

As Peter J. Boettke, Jayme S. Lemke and Liya Palagashvili (2015. “Polycentricity, Self-governance, and the Art and Science of Association.” Review of Austrian Economics 28 [September]: 311–35) emphasized, there is a close relationship between the Ostroms’ work (i.e., the Bloomington school of institutional analysis and development) and the Austrian school of economics which understands the market as a competitive discovery process. In our book titled (2019). Do Markets Corrupt Our Morals? (London: Palgrave Macmillan), my colleague, Virgil Storr, and I expanded upon the research by market process theorists to assess whether markets are morally corrupting. In short, we argued, the market process reveals information about market participants to their peers. The same market mechanisms that divulge information about consumer preferences, technological possibilities, and other market conditions also divulge social information about the people who populate market spaces. By merely navigating markets as buyers, sellers, producers, and consumers, market participants discover information about, say, each other’s trustworthiness. Through their interactions in the market, market participants also learn about who is detail-oriented, or is unscrupulous, or failed to deliver what she promised, or always works diligently, or tends to overcharge for services, and more. They then incorporate this newly revealed social information about one another in their subsequent economic decisions. For instance, they reward those trading partners that they find to be trustworthy with repeat business whereas they punish those trading partners they find to be deceitful by no longer engaging them in business. In this manner, the profit-and-loss mechanism allows market participants to reward good/desired behavior and punish bad/undesired behavior and incentivizes them to display better behavior over time. Thus, the market is not only consistent with morality (or “legitimate,” to borrow Devine’s terminology), but is also a moral teacher and a moralizing space.

The empirical evidence demonstrates that not only are people who live in societies that embrace markets wealthier, healthier, happier, and better connected, they are also more altruistic, more cosmopolitan, less materialistic, less corrupt, and more trusting and trustworthy than their counterparts who live in societies that restrict the free operation of the market. While Devine is obviously correct that a society’s political and economic (and social, for that matter) institutions must support and reinforce one another, Devine is incorrect that capitalism (i.e., the market system) will run rampant without a political order to keep it in check. In fact, capitalism is capable of self-regulating without the need to be controlled by a political or some other entity.

Devine’s The Enduring Tension could do more to engage literature on the morality and sociality of markets that has emerged, particularly in more recent years. Nonetheless, The Enduring Tension is an interesting book engaging an important question for our society. Devine, whose past roles and responsibilities include being the Director of U.S. Office of Personnel Management in Ronald Reagan’s administration, artfully interweaves his vast knowledge and experience in civil service with the core argument of this book. While those readers who are more policy- and civil service-oriented are likely to benefit more from reading this book than those in the academy, I think everyone will find it to be a rewarding read.