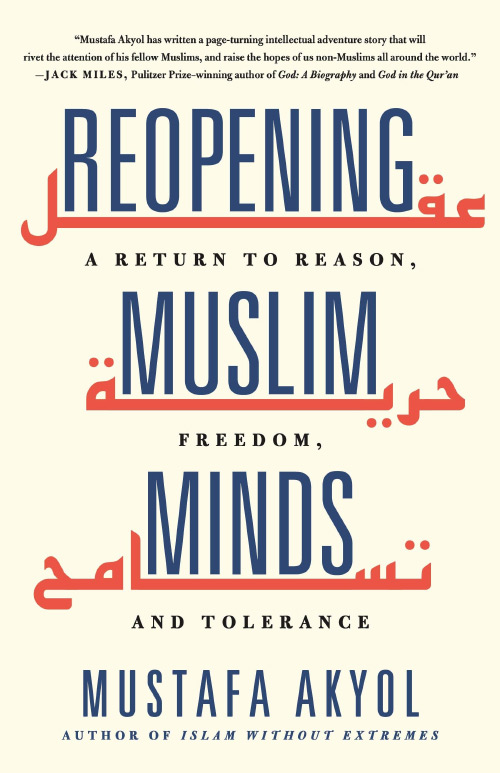 Reopening Muslim Minds
A Return to Reason, Freedom, and Tolerance
By Mustafa Akyol
Kindle Hardcover Paperback Audiobook Audio CD
This book review is a web exclusive for the Fall 2021 issue of The Independent Review.

Other scholars have studied different dimensions of the problem to understand the “Long Divergence,” or why Muslim-majority nations have lagged behind European nations in the past few centuries. Timur Kuran’s main argument in (2011) The Long Divergence (Princeton, N.J.: Princeton University Press) is that Islamic law promoted economic progress in the first several centuries following the spread of Islam but obstructed commerce in later centuries leading to institutional stagnation. Another prominent theory by economic historian Jared C. Rubin (2017. Rulers, Religion, and Riches: Why the West Got Rich and the Middle East Did Not, New York: Cambridge University Press) is that since it was least costly for rulers to secure legitimacy through the religious elite, the religious elite secured influential seats at the bargaining table that maintained institutions that reflect their interests. Yet another theory of rising importance in the literature, championed by political scientist Ahmet Kuru in (2019) Islam, Authoritarianism, and Underdevelopment (New York: Cambridge University Press) is the Ulema-State alliance or the alliance of religious scholars with state officials. The main argument here is similar but more specific than Rubin’s. Kuru says, “in early Islamic history, Islamic scholars generally regarded close entanglements with political authorities as corrupting; they preferred to be funded by commerce and maintained close relations with merchants” (p. 3). In later centuries, that pattern switched. Akyol’s work is crucial because it explains the theological and ideological underpinnings of the changes that led to Kuran’s institutional stagnation, Rubin’s conservative religious legitimacy, and Kuru’s Ulema-State alliance.

Schools that adopted divine command theory tended to espouse views that are conducive to authoritarianism. For example, Ash’arites legitimized the rule of despots and discouraged citizens from engaging in protests that would lead to civil unrest even in the face of tyrannical rule. Ash’arite political theory also legitimized Taghallub or gaining legitimacy to rule an area simply by dominating it by force. Comparatively, the Mu’tazilites and others who accepted ethical objectivism rejected both the legitimacy of despotic rulers and those who rule regions simply due to conquering them. In fact, some Mu’tazilites were anarchists, asserting that the abolition of hierarchical political authority can be favorable over despotic political authority. Today, there are few Mu’tazilites in the world and many Ash’arites. Akyol asserts that the Ash’arite school “won the day not because of its merits, but because of the support of the states that ruled the medieval Muslim world” (p. 139). Throughout the book, Akyol emphasizes the silenced voices of Muslim theologians and philosophers, like Mu’tazilites, Murji’ites, and the philosophers, who would have potentially kept Muslim-majority nations on their progressing trend. He does not imply that the Ash’arites should have been silenced. He suggests, "Muslims should have rather preserved a plurality of ideas, so these different strains could keep debating to learn from each other and also to refine themselves” (p. 231).

Akyol’s approach has many strengths. He embraces the multi-causal nature of this problem. He discusses a wide array of theological, legal, political, and social issues but shows how an ideological problem underlies them all. Unlike other works that tend to zone into one phenomenon or one dimension of the question at hand, Akyol surveys a long list of Islamic theological and jurisprudential changes that have power in explaining the rise of conservative orthodoxy. Another strength of Akyol’s book is that he also presents several cases across Muslim history of scholars from various jurisprudential and theological backgrounds advocating peace, pluralism, economic liberty, and later challenging the authoritarian status quo. He emphasizes that these ideas are not foreign to Islam and were at some points the mainstream.

Akyol’s multi-causal approach also opens the door for weaknesses. The book covers various controversial subjects with colossal implications but passes over them quickly. One issue particularly deserving of a closer look is the role of “reason” and the marginalization of "reason" in the rise and fall of Muslim-majority nations. Akyol devotes a large portion of his book to emphasize the positive role of reason and how its marginalization in theology and jurisprudence has played a role in the Long Divergence. It seems the association of reason with the rise of Muslims to prominence, and the rejection of reason with the fall of Muslim-majority nations is overplayed in this book, and Modernist Muslim literature, in general. There are a couple of reasons for this.

First, “reason” (‘Aql) as used by the Mu’tazilites, Zaydis, Ibadhis, and many Muslim philosophers is more accurately defined as moral intuition, as the book points out (p. 32). The groups mentioned above emphasized its role in discovering God and judging good and evil, broadly, with limits. However, moral intuition cannot be used to overcome unambiguous texts from the Qur’an or Sunnah in theology or jurisprudence, even according to the Mu’tazilites who are conventionally labeled as the flag-bearers of “reason.” Fortunately, we know that most questions in politics and economics are not definitive: Islamic texts provide ethical boundaries, and scholars engage in independent reasoning (ijtihad) to secure the best outcomes, according to their estimations, within these ethical boundaries.

Second, reason is quite limited and can drive nations towards authoritarianism and economic stagnation—just as it can drive them towards liberty and economic progress. The major theme of Friedrich Hayek’s (2010) The Counter-Revolution of Science (Carmel, Ind.: Liberty Fund) is that the abuse of reason is caused by man’s hubris in his own ability to reason and design the conditions for a better world. The limits of reason should be stressed because rationalism and scientism have frequently been the pretext for creating centrally planned economies and dictatorships. After all, planners “know” what is best. The association of rationalistic thinking with authoritarianism is particularly true in the Muslim experience, where Arab national socialism and secular authoritarianism rose as a revolution against tradition in Syria, Iraq, Turkey, and many other Muslim countries. The most convincing chapters are on apostasy and blasphemy laws and tolerance in Islam, particularly because the author aids rational criticism with textual analysis to present the weakness of evidence supporting these laws.

Reopening Muslim Minds is a massive endeavor. It is challenging to get the points and rhetoric right to influence the greatest amount of people positively because of how politicized and violent attempts at “reforming” Islam and Muslim culture have been. The book will have considerable appeal among heterodox Muslims and non-Muslims interested in the ideological and methodological diversity within the Islamic umbrella. It provides an excellent guide to how Modernist and Liberal Muslims go about reinterpreting tradition and the historical precedents they build from. The tradition of reinterpretation has a long history in Islam, and Mustafa Akyol explains how these precedents provide fertile soil for establishing the foundation of a liberal society.

It is worth mentioning that the modernist approach is limited because it does not use the epistemic framework that orthodox Muslims use to argue the validity, permissibility, and legitimacy of different opinions. Therefore, it fails to convince people whose knowledge stems from within that framework. This book is among the first steps taken in the right direction: emphasizing that the pathologies in Muslim nations are a product of contended interpretations instead of Islamic texts. What must follow is an attempt to address these issues from within each respective school of thought so that new arguments appeal to orthodox Muslims, who make up most Muslims in the world. If we want institutional change over the long run that accommodates the diversity intrinsic to the Muslim tradition and is conducive to a more peaceful, freer, dynamic Muslim world, we must speak the language of most Muslims: the language of tradition.

The need for orthodoxy to self-correct should not be a cause for concern because change from within the traditional framework is possible, albeit slow. From various sects, Muslim scholars in the modern world are working on addressing the statistical overrepresentation of violent conflict, underdevelopment, and authoritarianism in the Muslim world. It has been met with push-back by political authorities but continues to grow in popularity. For example, from within the Sunni orthodoxy and using the traditional framework, Shaykh Muhammad Al-Ninowy has advocated religious pluralism and nonviolence as a fundamental principle in Islam. Shaykh Hasan Farhan Al-Maliki has also advocated religious pluralism and self-correction in traditional Islamic studies programs, criticized political authoritarianism and militarism, and disproved the religious evidence for apostasy and blasphemy laws. Other contemporary prominent Sunni scholars working on similar issues include Sharif Hatim Al-Awni, Shaykh Hasan Al-Saqqaf, and Dr. Adnan Ibrahim. Similar trends are also occurring within the Shi’ite orthodoxy with correctionist scholars like Shaykh Muhammad Mahdi Shamsuddin, Shaykh Nematollah Salehi Najafabadi, and Sayyid Kamal Al-Haydari, who built the religious foundations of a civil democratic society based on ideological pluralism. Other notable Shi’ite correctionists on social issues include Sayyid Muhammad Baqir Al-Sadr, Shaykh Haidar Hobbollah, and Shaykh Hussein Al-Kheshin, to name a few.

For most Muslims, the utility of the traditional framework has been understood through experience and practice. The traditionalist approach is sticky and has a long history in Muslim memory. For change to stick, it may require the self-correction of orthodoxy. Perhaps one of the best things we can do is amplify the voices of correctionist orthodox and heterodox voices who will build rigorous foundations for free and tolerant societies based on assumptions focal to most Muslims.