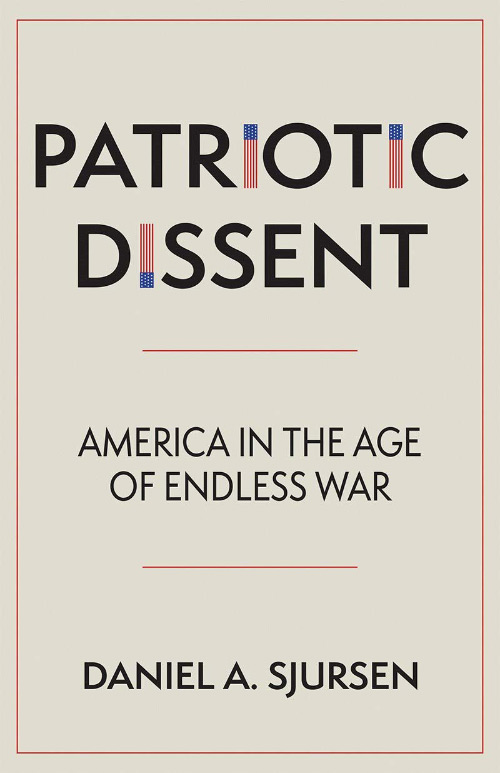 Patriotic Dissent
America in the Age of Endless War
By Daniel A. Sjursen
Kindle Hardcover
This book review is a web exclusive for the Fall 2021 issue of The Independent Review.

What does it mean to be a patriot in a country whose government is engaged in perpetual war? Patriotic Dissent, which is part autobiography, part American history, and part a call to action by American citizens, seeks to answer this question. After graduating from West Point, Daniel Sjursen, now a retired U.S. Army Major, served tours in Iraq (2006) and Afghanistan (2011–12). His on-the-ground experience made him skeptical of the U.S. government’s ability to win these wars. He describes his time abroad as “mostly boredom, punctuated by brief moments of sheer terror” (p. 2). To distract from the periods of boredom, Sjursen devoured American history books, solidifying not only his opposition to the wars he was involved in, but more generally, to empire and militaristic imperialism as a foreign policy. After returning home he pursued a graduate degree, taught history at West Point, and turned to writing, speaking, and activism.

This personal background provides context to the puzzle Sjursen seeks to solve—why is there so little dissent among Americans to never-ending wars? This includes military veterans who, Sjursen notes, rarely engage in public dissent. And even when they do, they are typically accused of beingunpatriotic or worse, a traitor to their country.

The notion of patriotism, he notes, has evolved. In the past, it involved the love of one’s country including a commitment to protecting the rights of individuals and the associated laws and institutions. Today, the latter part of the concept has been lost such that patriotism is associated with unquestioning devotion to one’s country and, by extension, the government in power. The earlier notion of patriotism encouraged, and even required, citizen dissent against government policies that undermined rights, laws, and institutions. Contemporary notions of patriotism remove the burden of dissent from citizens and even actively discourage dissent, especially in matters of foreign affairs where “the government” is viewed as a monolithic superstructure acting in the “national interest.”

Sjursen differentiates between three types of contemporary patriotism. “Pageantry Patriotism” entails public displays of patriotism—e.g., the military displays at the beginning of sporting events. This manifestation of patriotism requires little to no work on the part of the citizen in terms of critical thought or dissent. “Passively Principled Patriotism” entails taking issue with government policies in some instances, usually along party lines. To the extent these patriots take issue with war, it is because they oppose the administration in power, not because they take issue with war and militarism itself. An example would be the antiwar movement which emerged in response to the George W. Bush administration in the wake of the response to the September 11, 2001, attacks. This movement disappeared overnight with the election of Barack Obama despite his continuation of Bush’s “war on terror.” The least common form of patriotism is “Participatory Principled Patriotism,” which entails active dissent, irrespective of the party in power, against government policies that threaten the foundations of a free society. For members of the military, this entails “a patriotism that takes seriously the soldier’s and officer’s oath...to ‘support and defend’ the Constitution of the United States” (p. 30, emphasis original).

In his review of American history, Sjursen identifies four different traditions of dissent. Prophetic dissent is grounded in religious principles. Republican dissent is based on the tradition of the patriots during the American Revolution and the spirit of the Founding Fathers. Nationalist dissent finds its origins in the belief that a proactive militaristic foreign policy is at odds with American interests. Finally, cosmopolitan dissent finds its foundations in an appreciation of the diversity of the American polity and a commitment to peaceful interactions, including efforts at peaceful dispute resolution, with people around the world. Of course, these four traditions are not mutually exclusive, and one finds many instances of overlap throughout history.

In several places, Sjursen suggests that part of the reason for a lack of dissent is the end of the draft and move to an all-volunteer army in the early 1970s. This alleviated “the vast majority of the populace of any responsibility to serve, sacrifice, or even follow American foreign policy and war-making policy” (p. 80-1, emphasis original). I am not sure that continued conscription would resolve the issue of a lack of citizen interest and dissent. For one, conscription is not an absolute check on questionable wars as illustrated by the Korean and Vietnam Wars. Second, the nature of war has evolved such that the government requires fewer people for intervention abroad; the implication being that it is not clear that conscription would generate the desired “skin in the game” incentive on the part of the general citizenry. Third, given the legislative and fiscal powers of the national government, benefit programs can be created to purchase cooperation in the government’s proactive foreign policy. Sjursen points to the expansion in veterans’ benefits in the wake of World War II as an example of this logic. Finally, and perhaps most importantly, conscription institutionalizes militarism in domestic life. At best, it is ironic, and at worst counter-productive, to combat excessive militarism abroad with institutionalized militarism at home.

Patriotic Dissent closes with a call to arms. Sjursen finds little hope in the status quo. Military institutions and the foreign policy establishment—government bureaus, think tanks, special interest groups—have no incentive to shrink, let alone voluntarily constrain their ability to engage in future war-making. “[S]alvation of the national soul will not come from within the two-party system” he concludes, because “[t]hat structure isn’t designed to cultivate meaningful antiwar or anti-imperial dissent” (p. 118, emphasis original). Instead, Sjursen argues, dissent will need to be a grassroots phenomenon grounded in a concerned citizenry demanding change.

To make his case for a bottom-up approach to change, Sjursen invokes Alexis de Tocqueville’s insight that America was uniquely characterized by independence of mind and open discussion. Although not mentioned, Tocqueville’s emphasis on the “art of association” is also relevant to resolving the puzzle at the heart of the book. The art of association refers to the ability of people to come together to resolve collective action situations. These voluntary associations serve as a check on government power because private people can work with others without relying on the state. The provision of security is one such collective action situation that is often assumed to fall under the purview of the state—i.e., “national security.” It is this unquestioned assumption, however, which grants government so much scope in exercising its war-making powers. Even if grassroots dissent along the lines envisioned by Sjursen emerged, the state-run system itself would remain in place as would the perverse incentives inherent in the status quo. Thinking about alternatives to state-provided security is, therefore, crucial to envisioning the possibilities offered by patriotic dissent. Dissent can take the form of voicing displeasure with current policy, but it can also take the form of finding non-state alternatives which weaken the control of the state over the lives of the citizenry. Both forms of dissent are crucial for realizing the vision offered by Sjursen in his important book.