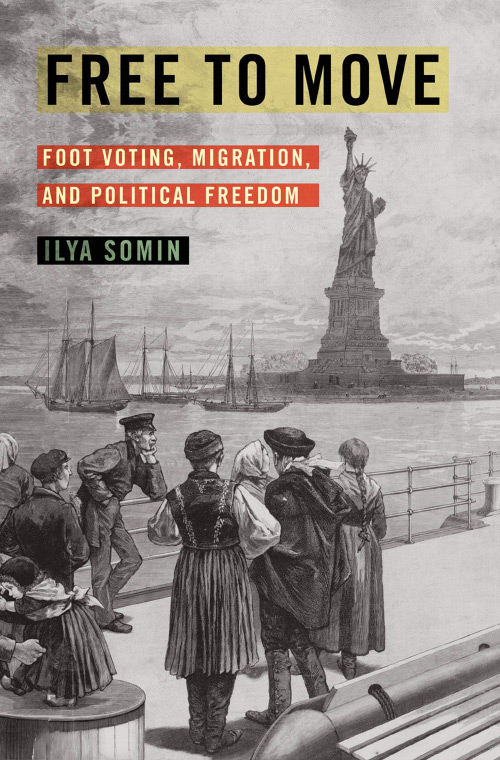 Free to Move
Foot Voting, Migration, and Political Freedom
By Ilya Somin
Kindle Hardcover Audiobook Audio CD
This book review is a web exclusive for the Summer 2021 issue of The Independent Review.

Men and women literally running for their lives, being clothes-lined by barbed wire barricades, and shot in the back by East German border guards are among the most memorable grainy newsreel images of the Cold War. Their widespread use helped establish one of the defining tropes of the political and social aspects of the Cold War conflict: people willing to risk being killed to exit repressive regimes behind the Iron Curtain. And as stoic and unflappable in public as the Eastern Bloc leaders were, the political inconvenience created by the geographic divide of the city of Berlin was too much for the communist propaganda machine to handle. Like the animals leading George Orwell’s Farm, the leaders of the Eastern Block realized they had to slam shut the farm gate or risk their whole case unraveling under the watchful gaze of the world. Four legs good; two legs bad, indeed.

Unless you have only two legs.

One of the nicest, if less intentional, aspects of Ilya Somin’s Free to Move: Foot Voting, Migration, and Political Freedom is to remind readers that the gruesome struggle to escape from the Farm didn’t end with the Cold War. The imagery of the Iron Curtain descending across the streets of Berlin in 1961 is not generally matched in our public discourse around politics and migration in the last thirty years. But on the individual as well as the aggregate level the human thirst for freedom and willingness to take risks to achieve it are as universal as ever. Indeed, in a world of increased interconnectedness through greater and cheaper communications and transportation, the realization and visibility of human migration have often seemed to move in opposite directions. Greater numbers than ever have exercised “foot voting” to exit political oppression, lack of economic opportunity, or other misfortunes. But aside from the occasional politically convenient outrage stoked by the likes of the Syrian refugee crisis of the 2010s or the Central American refugee caravans heading toward the American-Mexican border in recent years, this era of mass migration has largely been ignored by the mass public consciousness and neither has it been wrapped in nearly as much politically-motivated good-versus-bad geopolitical struggle unlike during the Cold War.

Ilya Somin situates his book against the backdrop his own parents’ decisions to leave the Soviet Union in the late 1970s when he was still a young boy. His story, like those of millions of others, is so familiarly woven into the American political and culture fabric it is easy to overlook the importance that this type of “foot voting” has had on countless millions of lives who have voluntarily immigrated to the United States over several centuries to say nothing of the many millions more who have experienced the same benefits moving between other regimes throughout history. Somin’s primary thesis is to show that foot voting can be a “powerful tool for expanding political freedom” (p. 2). As his own family’s story tells, this is a fairly straightforward point. However, while I hold Somin’s book in esteem and recommend it to readers, in some important ways it failed to live up to my, admittedly high, expectations on the topic.

Somin attributes two important characteristics to foot voting, as opposed to other common methods of voting like the ballot box. Those two distinguishing characteristics he identifies as the ability to make decisive choices and the incentives that come with that decisiveness to make well-informed choices. Somin explains the basic well-known logic of why this type of decision making is likely to lead to better more well-informed choices. And he identifies what he considers three types of foot voting: migration within a country, for example between different cities or states; migration between international entities; and “foot voting” as a consumer by choosing between brands, retailers, services providers, etc. Much of these arguments will be well-trod territory for readers of this journal. But I did find Somin’s readable and easily followed logic about the important interplay between the three to be a good reminder or more likely a good introduction to students or general readers not well-versed in public choice or political economy. Somin attempts to sell the novelty of his contribution by pointing out the similarities of the three types of foot voting he identifies and their importance for increasing political freedom. Again, I think readers less familiar with related literatures will find this insightful, and many more could undoubtedly find it a useful refresher. I was never quite sold on the overall novelty of his project—which I wish to make clear is distinct from the very high value I place on it both as a topic we should all be talking a lot more about and as a well-argued introduction for many readers who haven’t spent much time with these ideas. Somin does point out in passing moments the distinctions between his works and others. But it strikes me that a reader already familiar with ideas like Tiebout competition, the distinction between “exit” and “voice,” the basic arguments of rational voter ignorance and other aspects of public choice, and much of the later less-academic career of Milton Friedman will more likely find themselves nodding in agreement rather than raising a surprised eyebrow at new insights.

In terms of within-country migration, at several points Somin touches on the importance that migration within the U.S. has had on the rights of African Americans seeking to escape the political oppression and violence of a “free” post-Civil War South. Approximately “10 percent of the total black population of the United States” had migrated out of the South between 1880 and 1920 and there was an “even larger black migration from South to North in the years immediately following World War II” (p. 47). These staggering reminders are perhaps one of the greatest virtues of Somin’s book. To make us stop and think. Think about the circumstances human beings were being subjected to under a notionally “free” society. Think about the enormous difficulty and cost of such moves, not just monetary but emotional and physical. Think about the fear of the unknown that still was not enough to keep them in place. Then to think, if you even can, of taking this story beyond the narrow confines of late nineteenth century America and to the whole world, of that story multiplied by literally billions, not just poor blacks and freed slaves in the U.S., but Russian Jews, starving Irish, rural to urban Chinese, and on and on and on.

Somin spends a great deal of time deftly and thoughtfully rebutting arguments for restrictions on immigration from crime, “stolen jobs” and lower wages, cultural change, and of course the political implications of all those new potential voters. Somin’s rebuttals to the many critiques of immigration are thoughtful and refreshing given the acrimony the topics tend to generate in today’s political and social discourse. But his strongest and most emotionally compelling arguments are to occasionally remind the reader of the life-altering opportunities foot voting allows people around the world. Somin points out that over 2.7 billion people live in countries considered “not free” by Freedom House, and another 1.8 billion are in countries considered only “partly free” (p. 66). While small tales are usually better than tales of mass statistics at pulling the heart strings, even the most hard-hearted reader should sit up and take note of the fact that fully half the world’s population live in countries with significant restrictions on political freedom. “People who live under repressive regimes suffer serious human rights violations even if they are not targeted for special persecution” (p. 167). And Somin makes powerful arguments for why allowing them to move more freely to countries with more freedom is the right and morally defensible position for society. He points out that now, unlike the Berlin Wall imagery we began with, one of the biggest barriers to people realizing greater human freedom is not just limits on their ability to leave, but on the myriad limits rich countries in North America, Europe, and Asia place on immigration. This is a topic we hear far too much shouting about and far too little thinking about today.

There can be no doubt after reading Somin’s book that being “free to move” is an extraordinary contributor to realizing political freedom and human betterment. As his title suggests, Somin primarily limits his analysis to the ability of foot voting to achieve political freedom by allowing individuals to move from one jurisdiction to another. Unfortunately, he pays little attention to such an ability to impact political institutions within the country migrants might seek to leave. He points out that international remittances (payments from immigrants in rich countries back to their families in poorer countries) can make an enormous impact on the receiving economy and perhaps even spur calls for reform. But despite drawing the parallels between foot voting at the intra-national, inter-national, and market level Somin fails to adequately address the idea that foot voting leads to competition for people at all those levels. This is obviously true in the economic examples he gives of how holding the deciding “vote,” so to speak, the consumer not only has an incentive to be well-informed, but suppliers have an incentive to figure out what they want and give it to them. This same type of competition plays out in local, state, and international levels as well, even though we are not usually as aware.

Since we are talking about a book on migration a brief consideration of The Statue of Liberty is in order. The statue in New York harbor can be read two ways. The most common way, the way Somin convincingly and thoughtfully illustrates, is that the ability to migrate allows people greater opportunities to achieve their potential when freed from oppression. This is the reading of Emma Lazarus’s “The New Colossus,” which in one of its less well-known verses deems the statue “The Mother of Exiles.” But a second reading of the statue’s meaning, perhaps more important, is given in its original name, “Liberty Enlightening the World.” Not a call to immigration, but a celebration of freedom and what a free society can mean as an ideal and an alternative to an unfree world. In this sense, much less common in popular usage today, the idea is that immigration can improve not just the lives of those who immigrate, but even by the opportunity to do so, make the world a better place. That is a story that has not been well told and needs to be.

Matthew E. Brown
University of Illinois-Springfield
Subscribe Buy This Issue Get the App