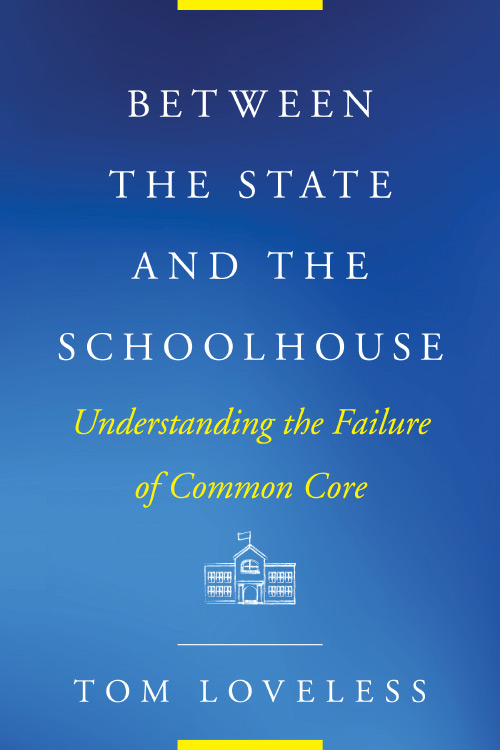 Between the State and the Schoolhouse
Understanding the Failure of Common Core
By Tom Loveless
Library Binding Paperback
This book review is a web exclusive for the Summer 2021 issue of The Independent Review.

For the sake of full disclosure, let me note that Tom Loveless and I were colleagues on the National Mathematics Advisory Panel (NMAP), a committee organized in 2006/7 during the presidency of George W. Bush. Its final report came out in March 2009. Its charge was to make recommendations to enable most students to take and pass Algebra I in grade 8—the “gateway” course to advanced math and science coursework in high school. Moreover, the NMAP was to rely upon the “best available scientific evidence.” In a nutshell, the charge to the NMAP was to recommend “how students can be best prepared for entry into Algebra.”

To find out what problems young students have in mathematics, the NMAP surveyed 743 Algebra I teachers in 2008. These teachers rated their students’ background preparation for Algebra I as weak. “The three areas in which teachers reported their students to have the poorest preparation were rational numbers, word problems, and study habits. For changes in the curriculum leading up to Algebra I, teachers most often cited the need for a greater focus at the elementary school level on proficiency with basic mathematical concepts and skills.”

In 2008/9, governors, education commissioners, and members of state boards of education were asked to agree to the adoption of Common Core’s College and Career-Ready Standards, sets of K-12 standards for mathematics and English language arts (ELA) that would, it was claimed, prepare all students for college-level coursework. Top elected and appointed officials in most states voted in 2010/11 to adopt Common Core’s standards, although their legislatures were not asked to discuss or approve the decision. They also voted to join a testing consortium that would help to ensure via statewide tests that each state would meet Common Core’s goal of college readiness for all students. Ten years later, the goal has not been met. In fact, on the latest National Assessment of Educational Progress (NAEP) tests, the “gaps” between high-achieving and low-achieving students have increased. Worried NAEP/NCES officials have no explanation for this phenomenon. Nor do they or Loveless know how to address the growing “gaps” between blacks and Asian Americans.

In Between the State and the Schoolhouse: Understanding the Failure of Common Core, Loveless offers his explanation for the failure of Common Core to make all students college-ready. He is not the first researcher to conclude that Common Core is a failure; it was obvious to many others that the use of Common Core’s standards had not improved student learning in any group of students. However, his book is the first to situate its failure in the sorry history of “standards-based reform.” Indeed, his first major recommendation (“lesson” or “principle”) is to “scrap” standards-based reforms (p. 162).

It is a puzzling recommendation because Loveless has assumed that the history of education, as well as the history of Common Core’s standards, can best be understood within the framework of standards-based reform even though the standards movement didn’t begin until the 1970/80’s. Many educators have identified other social forces (e.g., curricular practicality, child labor laws, and compulsory education) shaping public education over the centuries. In fact, Loveless ends up omitting hugely important events in his efforts to make the Common Core State Standards Initiative (CCSSI) fit into a history of standards-based reform. Yes, its name suggests it belongs in the history of standards, but CCSSI comes chiefly out of different motives—how to upgrade low achievers or minority students who don’t read, write, or calculate well. Loveless mentions key figures in the turn-of-the-century Progressive movement but underemphasizes its rationale—to motivate student learning. And he has little to say about the educational goals of the Civil Rights movement in the 1950s and ’60s. Loveless suggests that the CCSSI was a “top-down effort to impose equal standards on all schools,” not an attempt to address adolescent underachievement in African Americans. He sees the many bureaucratic layers between those in high federal and state positions and the classroom teachers at the bottom of the education hierarchy as the cause of Common Core’s failure.

Loveless explains the organization of his book in his preface. “The first three chapters are histories. The fourth and fifth chapters are on the content of the standards, early implementation, and politics. The sixth and seventh chapters review the existing empirical evidence on Common Core’s effects.” The last chapter “summarizes the book and offers lessons for future policy and research” (pp. 9-10). Because of his chosen framework, we miss an understanding of the beginnings of public education in this country and its goals throughout most of its history.

When the Puritans who settled Boston (after the Arbella landed in 1630) decided they needed a secondary school to better prepare students for college-level work in the ministry and law (Harvard College was founded in 1636), they established Boston Latin School (in 1635), the first public high school for boys who qualified academically for admission. For hundreds of years, schooling was seen primarily as a way to find and prepare the most talented and/or ambitious students for college, a goal continuing until after World War II. Well-known educators and tax-paying citizens were less interested in the education of other students, although their needs were not ignored. In early Massachusetts, as well as after the founding of the republic, non-college-bound students were expected to become literate enough to read the Bible in English and/or the warrant for Town Meeting, before they dropped out of school or graduated from a “grammar” school in grade 8 to work on the family farm.

Because Loveless situates the CCSSI in the history of standards-based reform, we learn nothing about the reasoning behind the College Entrance Examination Board (CEEB) in 1899, the College Board exams from the early twentieth century through World War II, the Sputnik-era programs of the 1950s and ’60s, the National Defense Education Act (NDEA) in 1958, the first authorization of President Johnson’s enormously influential Elementary and Secondary Education Act (ESEA) in 1965, and the central finding of the Moynihan Report in 1965 and the highly influential Coleman Report in 1966 (that family variables were more important than schools and teachers in explaining academic achievement). A private organization, CEEB sought to expand access to higher education. The Sputnik-era programs and the NDEA institutes were an attempt by Congress and others to reshape the content and pedagogy of the school curriculum for all students even though it seemed to many parents that the academic experts and teachers guiding its institutes and programs aimed only for the high end of the student population. ESEA was the first federal effort to give money (via various Titles) to the states and urban school districts to improve the education of low achievers (as part of Johnson’s Great Society program). ESEA at first targeted low-achieving black students and students on Indian reservations but was later redefined to include all student groups considered “minorities,” or victims of the dominant culture, as they are now viewed. Only in its first authorization did ESEA seek to strengthen the school curriculum for all students. Its most recent authorizations (No Child Left Behind, or NCLB, in 2002, and the Every Student Succeeds Act, or ESSA, in 2015) have sought mainly to close the “gaps” between black and white students in this country (which is why, with Gates Foundation support, it was rapidly adopted by most states in 2010/11).

Although Loveless vociferously denounces “standards-based reform” in his final chapter (followed, puzzlingly, by a second recommendation for “flexibility” in standards), he doesn’t propose any alternative to the use of standards as a guide to K-12 curriculum and instruction or to the use of tests for accountability. It is clear that he favors live classroom interactions like those he engaged in for many years as a grade 6 teacher. At least, he does not spell out any alternative to “standards-based reform” to help low achievers, although he is quite clear that Common Core and other standards-based efforts have been failures because they expected low-achievers to learn material they were not ready to learn (his call for “flexible” standards means what?). He is not for test-based accountability or any other form of accountability or other conditions for federal or state aid. Nor does he mention teacher-made tests, quizzes, College Board exams, the old SATs, etc. It’s difficult to figure out how parents and others would find out if the teacher taught anything at all in Loveless’s vision of subject-centered classrooms in the secondary grades. Since ESSA requires state adoption of college and career-ready standards, his recommendation (to abandon “standards-based reforms”) will go nowhere, and he is too smart not to know that. He offers no recommendations on student testing, which ESSA also requires, and says nothing about subject-oriented licensure tests for prospective teachers. Nevertheless, because ESSA requires the U.S. Department of Education (USED) to approve a state’s standards, all states now have college and career-ready standards (i.e., the Common Core), and state tests must be based on them to be legal—in any state. In effect, ESSA has centralized education policy making in USED despite a Constitution that restricts education policy making to the states.

His book is, in essence, an excuse for public education to continue with failed standards, i.e., a Common Core-based curriculum that hasn’t improved student learning in any subject, and with Common Core-based tests for accountability that use up precious instructional time. That may be all Gates et al. want. Loveless does not address the extent of the Gates Foundation’s involvement and investments in Common Core-related matters or materials. The Gates Foundation has given many millions for supplementary curriculum materials, for research, and for organizations like this country’s major teacher unions and the Thomas B. Fordham Institute to promote Common Core and does not propose (at least publicly) to revise Common Core’s failed standards. The Foundation’s continued support for Common Core’s failed standards for public education leads to the conclusion that Common Core today does not seek to strengthen public education or raise the achievement of low-scoring students. (It may originally have sought as well as promised to do so.)

Indeed, Loveless ends his book with the hope that a new theory of education will pay more attention to the “bottom of education.” It is an ironic ending to a book about a failed project that has turned public education into an institution seemingly focusing on low achievers but clearly not on higher achievers (i.e., “to level the playing field”). For example, in the name of “equity,” California schools will not offer advanced math coursework except in grades 11 and 12. Regardless of learning pace, students are to be kept together in each grade until grade 11. Apparently, there are not enough low-achieving minority students in California who can pass an Algebra I course in grade 8, or an authentic Algebra II or pre-calculus course before grade 11. Until that utopian day arrives, the nation’s schools will continue to be evaluated by the performance of students who do not learn to read, write, and calculate well, instead of by those who do. And we will have more books on why this country has chosen to keep failed standards to guide public education in K-12.