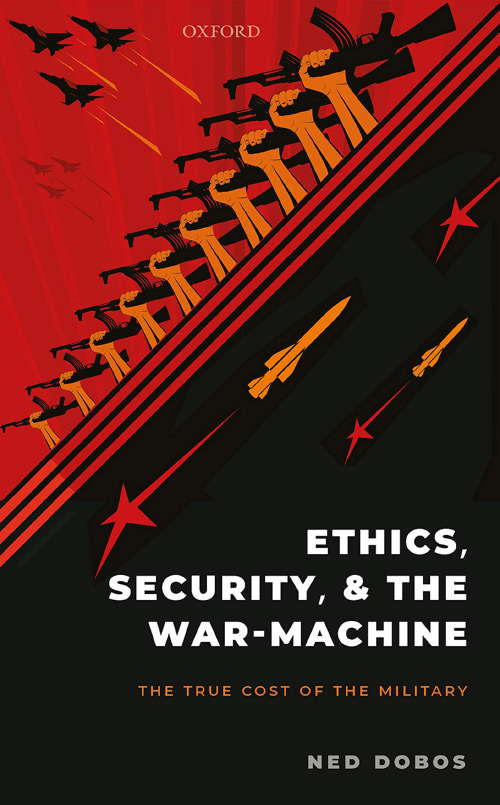 Ethics, Security, and the War-Machine
The True Cost of the Military
By Ned Dobos
Kindle Hardcover
This book review is a web exclusive for the Summer 2021 issue of The Independent Review.

Just war theory, which seeks to establish a set of criteria under which warfare is morally justifiable, typically focuses on three aspects of war. The first, jus ad bellum (“right to war”) is concerned with the morality of initiating warfare. This category includes things like just cause, the exhaustion of other alternatives to war, and the likely proportionality of good versus harmful outcomes from war. The second, jus in bello (“justice in war”) focuses on moral conduct during conflicts. Relevant topics include the treatment of soldiers, prisoners, and civilians during war, as well as the morality of the types of weapons and techniques employed. Finally, jus post bellum (“justice after war”) focuses on moral behaviors in the wake of conflict. This includes things like moral responsibilities to negotiate and enforce peace, provide humanitarian assistance, or engage in post-conflict rebuilding. Discussions of these categories typically take the state military apparatus as a pre-existing given and focus on when, and how, that instrument is utilized by those in control.

Missing from this discussion is the ethics of establishing and maintaining the military apparatus itself. Ned Dobos’s important book fills this gap by focusing on a fourth category of just war theory, jus ante bellum (“justice before war”). The relevant issue in this category is when, if ever, it is moral for a society to militarize by creating and maintaining a war-making apparatus. The question of jus ante bellum, according to Dobos, “is best understood as asking of particular war-making institutions whether they are justified in existing” (p. 1, emphasis original).

From this premise, Dobos explores some of the central, and often overlooked, costs of establishing and maintaining military institutions. War is inherently coercive and violent. Preparing for war requires not only training people in the skills of war-making, but also in conditioning them to be morally numb to inflicting harm on other human beings. The issue, according to Dobos, is that the conditioning morally injures soldiers by degrading their moral conception of just behavior toward other dehumanized persons. A good soldier can demonstrate indifference to harming others to fulfill their duties to military leaders. This affects the moral constitution of the individual both in his or her military and non-military affairs. The overlooked costs of military institutions do not end here.

The second form is the well-known “security dilemma” whereby increases in one country’s military strength make other countries feel less secure, inducing a response that can potentially increase conflict-related tensions. In this instance, efforts at deterrence have a counterproductive effect by inducing others to increase their military capabilities and potentially engage in conflict out of fear of vulnerability. To provide one illustration of this dynamic, Dobos points to the offensive use of drones, which often target “people who might potentially commit violent acts at some point in the future, rather than people who are about to, or who are in the process of, carrying out an attack” (p.75). More broadly, establishing and expanding domestic military capabilities can, holding all else constant, incentivize other states to engage in “preventive war” to avert some future action that may occur.

Another risk of standing military institutions is that they might be overused, where overuse refers to the deployment of military force beyond just wars and interventions. Dobos draws upon research on cognitive biases—e.g., overconfidence—from experimental psychology to explain why policymakers may overuse the military. The argument for potential overuse would be even stronger if insights from public choice scholarship were included. This research highlights the endogenous tendencies of government programs and agencies to expand in their scale and scope. Government agencies justify their existence and increase their budgets by “doing things” as compared to sitting idle. Moreover, the state’s military apparatus is characterized by major information asymmetries between military institutions and political oversight mechanisms (legislative and voter oversight). This is due to the ability of those in military institutions to control the flow of information; outsiders are typically dependent on insiders for the production and dissemination of information. The incentive for overuse means that once military institutions exist, they are likely to be used to carry out unjust wars.

Ethics, Security, and the War-Machine makes a major contribution to just war theory by highlighting the importance of the jus ante bellum question.The very existence of a military establishment often has significant, moral and social costs that go beyond monetary outlays. The particulars of these costs are context-specific. As Dobos readily recognizes, “Whether the costs of militarization are worth bearing can only be determined by a case-by-case basis” (p. 132). One implication of recognizing that these costs exist is the need to consider potential alternative institutional arrangements for defense provision. After all, it is possible that the total costs (social, moral, and monetary) of maintaining the military status quo are sufficiently high to make alternatives attractive. But this requires that we think about what those alternatives might look like.

In the Epilogue, Dobos discusses the idea of civilian-based defense grounded in the work of political scientist Gene Sharp (for an overview of Sharp’s work, see Joshua D. Ammons and Christopher J. Coyne “Gene Sharp: The ‘Clausewitz of Nonviolent Warfare’,” The Independent Review 23(1): 149–156). In Sharp’s vision of civilian-based defense, all members of a society have a role to play as a defense force against internal and external threats. The idea of “weaponry” is expanded beyond instruments of violence to include various forms of nonviolent resistance (economic, political, social) which can in principle make it costly for attackers to achieve their goals and objectives. Dobos contends that these types of alternative arrangements may offer moral advantages over state military institutions. While the feasibility and desirability of alternative forms of defense are context-dependent, they should not be dismissed out of hand, at least not by those concerned with the moral and social costs of militarism and war-making. Indeed, avoiding moral decay and rot of free and liberal societies may very well depend on our ability to imagine alternative ways of providing security to avoid the deleterious effects of state war-making institutions.