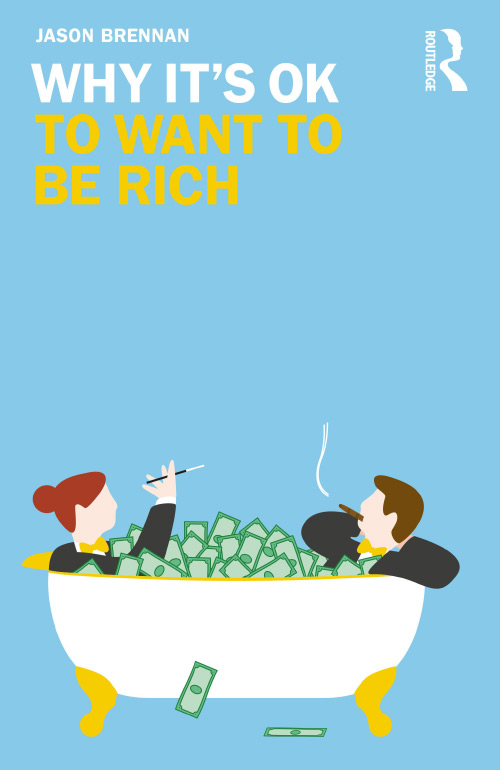 Why It’s OK to Want to be Rich
By Jason Brennan
Kindle Hardcover Paperback Audiobook
This book review is a web exclusive for the Summer 2021 issue of The Independent Review.

In August 2020, about 100 protestors gathered outside of the Washington, D.C. house of Jeff Bezos, the founder and CEO of Amazon, to demand higher wages for the company’s employees. The protest was held on the day that Bezos’s net wealth surpassed $200 billion, making him the richest person in history. To commemorate the achievement, the protestors set up a guillotine. Chris Smalls, a former Amazon employee, addressed the protestors stating, “Give a good reason why we don't deserve a $30 minimum wage when this man makes $4,000 a second”. A similar type of thinking is held by many concerned with income inequality. This includes citizens around the world, as illustrated by the global Occupy Movement beginning in 2011, and academics, as illustrated by Thomas Picketty’s best-selling book, Capital in the Twenty-First Century(Cambridge, MA: Harvard University Press, 2014). Jason Brennan offers a different and much-needed perspective.

Why It’s OK to Want to be Rich does an excellent job of drawing upon a variety of disciplines—ethics, economics, political economy, psychology—to present a powerful defense of desiring and accumulating wealth. The book’s greatest strength is its accessibility to both specialists and non-specialists. Nuanced arguments are presented in an engaging manner along with illustrative examples. Relevant academic research is thoroughly documented in the endnotes and reference list for readers seeking further detail. Over the course of the book, Brennan defends three propositions—(1) that it is okay to want money, (2) that it is okay to make money, and (3) it is okay to keep the money that you earn.

Brennan contends that is acceptable to want money because wealth is freedom. It allows us to pursue a flourishing life beyond bare necessities. It also provides safety and protection against potential negative shocks in our personal lives. Moving beyond the individual, money serves as “the essential glue that binds people together” (p. 49). In developing his argument in support of his first proposition, Brennan provides a wonderful explanation of how the market process operates to coordinate the division of labor through prices and profit and loss. Markets don’t just generate profit out of thin air, but instead foster value-added wealth creation through innovation, social cooperation, and peaceful interaction. Brennan is careful to differentiate between profit derived from positive-sum activities, and profit earned through other means, such as political cronyism.

But don’t markets and the pursuit of profit make us less moral? No, argues Brennan. Money facilitates economic trades which require social interactions. These interactions both require and foster openness, trust, and honesty. Brennan is no utopian. Vices, dishonesty, and immoral behavior exist. But they are social constants and have nothing to do with money or market exchange. Money is often viewed as “dirty,” not because of any inherent property, but because of the meaning people (especially Westerners, argues Brennan) attach to it.

If one understands the source of wealth—positive-sum activity which makes other people better off—then one understands why it is okay to make money. If improving the life of other people is a noble pursuit, then so too is earning wealth since the latter requires the former. This logic does not just apply to the wealthiest members of society. As Brennan notes, ordinary wage earners “give back,” often significantly, to society through their value-creating daily activities. Precisely because markets are so effective in facilitating exchange and wealth creation, and because of the stigma many attach to monetary transactions, these realities are easily overlooked or misunderstood. The concern is that this neglect will lead to calls to “reign in” markets through government regulation and control; these interventions are likely to undermine wealth creation and the associated benefits.

Even those who recognize the wealth-creating properties of markets might hesitate in endorsing Brennan’s arguments. Even if people create wealth today, they use ill-gotten means based on luck or past injustices. Brennan anticipates this counterargument and dedicates a chapter (Chapter 5) to three alternative theories of wealth accumulation—differing natural resource endowments, imperialism and the confiscation of foreign resources, and slavery. In reviewing the evidence, Brennan finds each potential explanation for wealth wanting. Drawing on a vast literature in economics, he argues that variations in wealth can be explained by institutions—the formal and informal rules of the game governing human behavior. It isn’t that these other factors (resource endowments, imperialism, slavery) do not matter. But these factors cannot, by themselves, explain the wealth we observe around the world today.

Even if one is okay with wanting and making money, certainly they have an obligation to give some of it away. Not necessarily, argues Brennan. We face a trade-off between charity and investing scarce resources in producing new wealth. Charity can certainly help people (although this cannot be assumed because charity can also cause harm to those it intends to help), but so too can engaging in positive-sum economic investment. If we are concerned with sustained, long-term improvements in human wellbeing, then one might very well place strong moral weight on investing in the process of wealth creation as compared to charitable giving. To be clear, Brennan’s argument is not that people should not engage in charity to help others (he openly endorses doing so and suggests that many people should do more). Instead, he forces the reader to realize that there are real trade-offs and that arguments that those who possess wealth have a moral obligation to give it away to help others are not as clear-cut as proponents might think. Brennan also notes that there are policy changes that do not involve charity—e.g., reducing trade and migration barriers—that could have dramatic positive effects on the welfare of people around the world.

Brennan makes a convincing case that it is acceptable to want money, to pursue money, and to keep what you earn. The question remains—is capitalism sustainable? This question has been raised by several scholars including Joseph Schumpeter, F.A. Hayek, and, most recently, Michael Munger. Sustainability requires two things. First, it requires institutions that incentivize value-added productive entrepreneurship as compared to negative-sum unproductive entrepreneurship. As Brennan warns the reader, “When you vote for politicians who promise to regulate industry more and who promise to expand government’s intervention in the economy, what you end up doing—though this was not your intention—is increase the value of rent-seeking and make it easier for corporations and special interests to cheat the system” (p. 98). Second, and more importantly, capitalism requires certain beliefs about the morality of the desire, pursuit, and accumulation of wealth (and all that goes into the process of wealth creation). When these beliefs are lacking, the institutions necessary for positive-sum wealth creation will atrophy or disappear; people who desire and pursue wealth will be viewed as evil villains instead of heroic creators contributing to improvements in human wellbeing.

Why It’s OK to Want to be Rich offers a much-needed defense of the morality and economics of wealth creation. Hopefully, people read this book and internalize its core messages. If the goal is to improve human wellbeing, doing so would be a much better use of their time as compared to constructing guillotines to protest wealth.