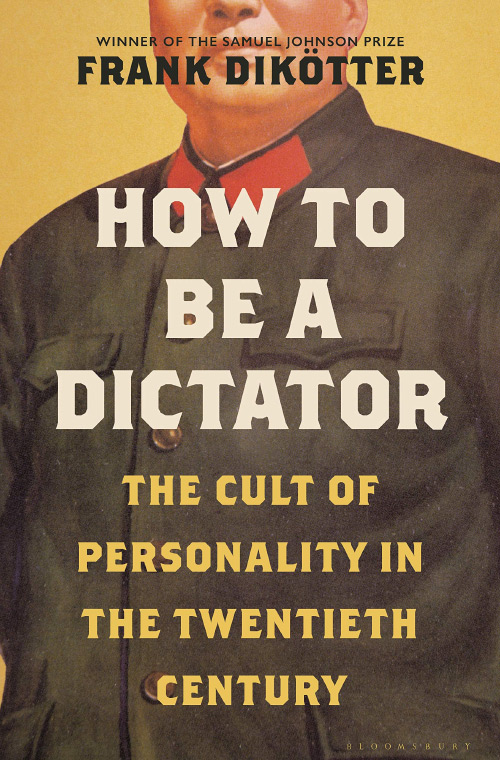 How to Be a Dictator
The Cult of Personality in the Twentieth Century
Frank Dikötter
Kindle Hardcover Paperback
This book review is a web exclusive for the Spring 2021 issue of The Independent Review.

On December 17, 2011, Kim Jong-Il—the second Supreme Leader of North Korea—died. The ensuing funeral captivated outside audiences. Hundreds of thousands of North Korean citizens lined the capital of Pyongyang’s streets, weeping and lamenting the passing of the “Dear Leader.” Images of hysterical crowds beside themselves were broadcast to the entire globe. But reports quickly surfaced that for many North Koreans, mourning properly was a matter of life and death. Citizens who were deemed to be insufficiently despondent over the dictator’s passing ran the risk of severe punishment. Rather than being a spontaneous outpouring of sadness at the death of a beloved statesman, the behavior of North Koreans was the latest iteration of the “cult of personality” that surrounds the Kim family.

While the North Korean version may be the most well-known, it is by no means the only cult of personality that has existed. Cults have been seen in places like China, the Soviet Union, and various Eastern European countries. Given their prominence and outlandish nature, it is no surprise that cults of personality have captured the attention of many Western observers.

Frank Dikötter’s latest book, How to Be a Dictator: The Cult of Personality in the Twentieth Century, tackles this institution head on. Dikötter is certainly the right person for the job—his earlier work on Maoist China is nothing short of spectacular. There are very few living historians who are as well acquainted with the inner workings of totalitarian dictatorship, and one could not ask for a better guide into the subject at hand.

Broadly speaking, Dikötter’s goal is to provide an explanation for why dictators promote cults of personality. As he tells it, the cult of personality serves a very important function: it helps dictators guard their rule from potential usurpers. By requiring everyone to glorify the leader to such an absurd degree, dictators were able to frustrate any attempts at coordinating coups or other forms of resistance. When everyone is forced to lie day in and day out, it becomes hard to tell who is lying, thus making the finding of potential collaborators difficult.

Dikötter then takes us on a tour of some of the most famous cults of personality in history. Chapters 1 and 2 describe the cults that were built around Benito Mussolini and Adolf Hitler. In many ways, Mussolini’s cult inspired Hitler to create his own as the latter consolidated power in Nazi Germany. Both men made use of mass media to promote their images and grow the myths that surrounded them, and both had a penchant for the dramatic. Mussolini, for example, would meticulously practice his public addresses, which would be broadcast to the entire country by media that he already controlled. Hitler, aided by his Minister of Propaganda Joseph Goebbels, ruled the radio waves, and began to outdo the cult of Mussolini at every step.

Chapter 3 travels further east, specifically to the Soviet Union under Joseph Stalin. While Stalin’s cult was second-to-none in terms of its grandiosity, Stalin himself lacked the charisma of Mussolini or the flair for oratory that Hitler possessed. Stalin initially presented himself as a devoted servant of Marxism-Leninism, and one who attended to practical rather than theoretical matters. However, by the end of the 1920s, Stalin had managed to place himself on par with Lenin in the pantheon of communist leaders. His grip on the party only grew stronger as he dispatched enemies like Leon Trotsky, and in the mid-1930s the cult reached a fever pitch as the Great Terror got under way. The Stalin cult continued apace until the demise of the Vozhd (leader) in 1953. It was finally put to rest in 1956 by Nikita Khrushchev, who in the infamous 1956 “Secret Speech” denounced the unconditional worship of Stalin.

Chapter 4 provides a comprehensive account of Mao Zedong’s rise to power, as well as the form his cult of personality took. Perhaps more than any other communist leader, Mao was a master of backchannel intrigue, and was able to harness the cult to secure his own power and ruin his would-be opponents. The first such instance of this was Mao’s Rectification Campaign, in which he established himself as the ultimate authority within the Chinese Communist Party (CCP). Upon Mao’s victory over the Nationalist forces of Chiang Kai-Shek in 1949, the cult was in full swing, with intensive study of Mao’s works made mandatory and songs glorifying him being blared from speakers installed in nearly every public space. While the Mao cult faced a significant setback with Khrushchev’s 1956 denunciation of Stalin, it soon came roaring back and reached its apotheosis during the Cultural Revolution. But Mao’s cult, too, would not last. After the Cultural Revolution, the support of personality cults was explicitly banned in the CCP’s constitution.

Chapter 5 brings us to the cult of personality that is likely the most familiar to readers: the cult of Kim Il-Sung. Bequeathed to his son, Kim Jong-Il, and his grandson, Kim Jong-Un, the Kim cult also has the distinction of being the only one that Dikötter studies in detail which still exists today. This chapter stands out in terms of the brutality that accompanied any perceived disrespect to Kim Il-Sung. North Koreans were apt to be punished for the slightest of infractions, with citizens being imprisoned for such “crimes” as wrapping a book in newspaper that had a photograph of Kim Il-Sung printed in it or recommending that not every new publication needed to begin with the phrase “Our beloved leader Kim Il-Sung” (p. 133). While some of the other cults Dikötter discusses ebbed over time, the Kim cult has proven remarkably resilient and shows no sign of disappearing.

Chapter 6 details the cult of personality of Francois Duvalier. While physically much closer to the United States, this cult—along with the cult of Mengistu Haile Mariam, the subject of chapter 8, are likely to be the least familiar cults for readers. Though neither dominated the global stage like the cults of Stalin or Mao, to the citizens who lived under them, they were just as powerful. While most cults of personality incorporate folk tales, Duvalier’s cult is unique in the role that it afforded the spiritual. Voodoo was a key part of the Duvalier cult, and Papa Doc himself took great pains to portray himself as something akin to a living Voodoo spirit who had been chosen to guide Haiti. In Ethiopia, Mengistu did his best to replicate the imperial trappings of the final emperor, Haile Selassie I. Like other cult figures, Mengistu was prepared to turn on his subordinates at the drop of a hat. Questioning his orders, or failing to show him the appropriate honors, would be dealt with harshly. A discussion of the Ceausescu cult in Romania, which ultimately failed to protect the dictator from being overthrown and ignobly executed, appears in Chapter 7 between the Duvalier and Mengistu cults.

Dikötter’s theory does much to advance our understanding of cults of personality and dictatorship overall. It is already commendable in that it is built on a foundation similar to the rational choice explanations that are so familiar to economists. Personality cults are not attributed to the whims of megalomaniacs, nor are they taken at face value as expressions of support for dictators. Rather, Dikötter encourages us to think about cults as tools used by rational autocrats to help them achieve their goals. This alone helps us make considerable progress in understanding the cult of personality.

While illuminating, there are some facts that Dikötter’s theory is less adept at explaining. To take one example: if the primary function of a cult of personality is to help dictators prevent their opponents from ousting them, why did the personality cults of Stalin and Mao die with them? While they may have been more constrained than their predecessors, it is hard to argue that Khrushchev and Deng (Hua Guofeng’s brief tenure is excepted) were any less vulnerable to assaults on their positions by their subordinates. If the success of the Kim regime has shown us anything, it is that cults can survive the death of their objects. And as Dikötter notes, leaders like Pol Pot did not develop their own personality cults. Other perspectives must be brought to bear to explain the appearance and disappearance of cults of personality over time.

The book could also have benefited from some more engagement with other prominent theories of personality cults. Xavier Marquez at Victoria University of Wellington, to mention one name, has several excellent papers on dictatorships and leader cults. A research community studying cults has started to grow in the past two decades, which should be encouraging for enterprising young researchers.

But to say any of these issues are “failures” of the book would be wildly unfair. Not only has Dikötter helped further our knowledge of the functioning of dictatorship, but he has provided future scholars with an able introduction to the cult of personality. Each chapter is rich with institutional detail, and the bibliography he provides is a veritable treasure trove of sources for the interested scholar. Not insignificantly, Dikötter’s work is also pleasant to read, and will capture the attention of both layperson and academician alike. Political economists of all stripes will find the book of interest, and it is a must read for anyone who is studying cults of personality or autocracies more generally.

My only fear is that works like Dikötter’s will become more relevant for the future instead of the past. While it is true that today’s dictatorships have been unable to replicate the magnitude of the past cults of personality, Dikötter is correct to say that many regimes—like that of Xi Jinping—appear to be bearing an increasing resemblance to those that built cults of personality. Dictatorship may be on the decline when compared to the twentieth century, but this does not necessarily mean that liberal democracy has been in the ascendency. Governments may well begin adopting elements of the cult of personality to serve their own interests. Dikötter is right to quote the old saying that the price of liberty is eternal vigilance. With this in mind, all vigilant proponents of liberalism will profit from reading this book and studying the cult of personality more thoroughly.