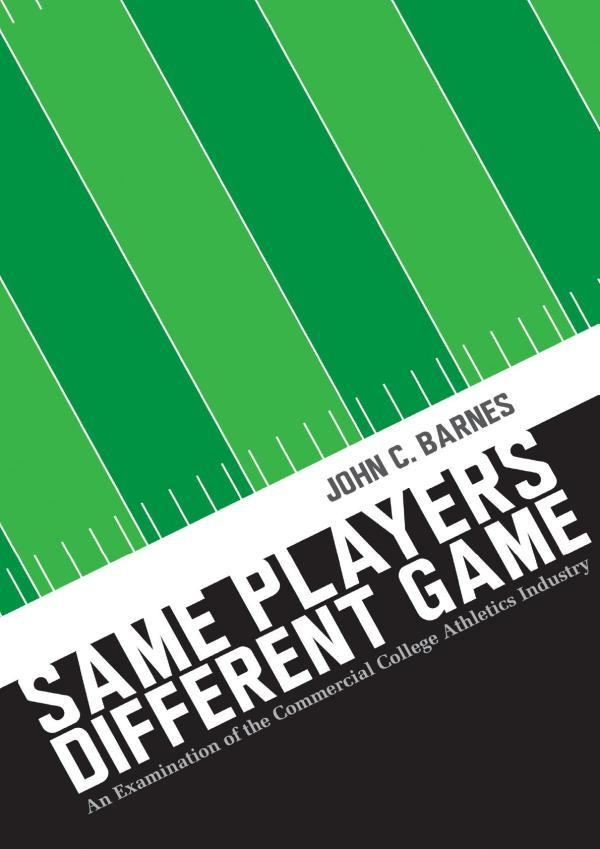 Same Players, Different Game
An Examination of the Commercial College Athletics Industry
John C. Barnes
Hardcover
This book review is a web exclusive for the Winter 2020/21 issue of The Independent Review.

Nearly fifty years ago, I was a freshman runner on the University of Tennessee track and cross-country teams, and I was part of a program that enjoyed much success, including winning a couple of NCAA championships and dominating the Southeast Conference. Four years in an elite athletic program that included a proud tradition of having nationally competitive programs in both football and basketball enabled me to see college athletics from the inside, and I do not regret the experience.

Even then, our athletic program faced scathing criticism from both student and faculty sources. Our student newspaper, the UT Daily Beacon regularly excoriated our programs on its editorial pages with students and faculty claiming that a “big business” sports program like ours had no place on the holy ground of academics. (The Daily Beacon, however, did cover UT sports enthusiastically on its sports pages, and I even had the pleasure of covering one of the legendary Pat Summit’s women’s basketball teams as a beat writer in the fall of 1975.)

Since then, much of college athletics has changed—yet also remained the same. Women’s sports, which nearly were non-existent when I was on campus, are a major part of higher education athletics, but even today, the same two sports dominate the scene, football and men’s basketball. The more things have changed, the more they have remained the same.

John C. Barnes, a physical education professor at the University of New Mexico, sees major college sports as not having changed much in more than a century of its existence, except to say that the situation is worse than ever. In Same Players, Different Game, Barnes examines Division-I sports. He likes little of what he sees and believes that college sports promotes what he believes to be the worst institutions that our society has to offer—corporations and capitalism—and creates unequal outcomes that mirror the underside of current life in the United States. College athletics, he writes, have corrupted higher education and promote sexism, racism, and massive inequality, and have little, if any, redeeming value.

He sets his theme in the introduction, laying out a broadside:

“commercial college sports are impactful, often in a negative way. They impact the lives of the athletes who participate. They impact the campuses on which they are housed. They are an exercise in crass consumerism that seems contradictory to the foundations of liberal arts higher education, paradoxically placed smack in the middle of environments full of people who want them to go away.

“Popular perception of commercial college athletics—aside from that of the millions of fans with cultlike attraction and devotion to their favorite teams—is that they are superfluous toå the purpose of higher education, a result of colleges and universities selling their souls for the profit and prestige of athletic successes. It is difficult to argue with that. But commercial college athletics are more than that. They are a cultural phenomenon that—as many scholars like to point out—exist only in the United States. They act as cultural forms that serve to substantiate and enhance certain American beliefs, including binary gender ideology, top-down authority, religiosity, militarism, and, most notably, capitalism” (pp. xiii-xiv, emphasis mine).

While he adds that the book does not condemn high-level college sports, it is obvious that Barnes believes they are illegitimate. In the quote above, there is much in that last sentence that defines Barnes’s thinking and his own ideological approaches to discussing the phenomenon of college sports. First, and most important, he writes as though long-established institutions that are found nearly everywhere in the world somehow would be diminished if college athletics didn’t exist or would be very different in scope. Furthermore, Barnes clearly considers things like capitalism and religion to be evil, although he does not explain why that is so. We are left simply to accept his word for it.

Note that Barnes considers the belief of binary gender as an ideology, yet until recently every application or legal document had only male or female categories, and one doubts that it was the product of an ideology forced upon unwilling people. If there is an ideological position, it would be that sex is not limited to the two categories of male and female and increasingly in higher education, the gatekeepers are demanding that those employed in colleges and universities accept the ideologies associated with transgenderism—or find another line of work.

Although Barnes does not explain how college sports promotes the “ideology” of binary gender, one senses that it would be (at least in part) due to the fact that there are male sports and female sports, and that in most athletic contests (save for sports like archery or shooting) males compete against other males and females against females. But women’s sports have grown in part at the collegiate level because of major federal legislation such as Title IX of the Education Amendments of 1972, legislation universally revered by many of the same groups that also support issues such as gay and transgender rights, and even now there are major protests by female athletes who compete in jurisdictions that require women’s teams to accept men who say they identify as females. College sports is condemned either way, in the author’s view.

In reading through this book, I recognize the similarity of arguments that critics of college sports made in the early 1970s and what Barnes writes. Outspoken faculty members accused our programs of “corrupting” the academic process, and they openly doubted that we athletes could be called “student athletes.” Indeed, I did witness some cheating among teammates (although it also was rampant in the general student body), and practice time and meets (I competed year-round) were time-consuming.

Barnes refers to the relationship between athletics and academics as “an unstable marriage,” and cites the numerous controversies related to the admission of athletes who are “not ready” to take on college-level studies. At the same time, however, he presents no criticism of federal policies that look to accomplish the same thing. With forces in higher education pushing for increased equality of outcomes for minority students, due in part to the effects of the response to COVID-19 and in part to the racial strife that broke out in 2020, a number of educational institutions, including the University of California System, are eliminating standardized entrance exams and lowering admissions standards. In other words, it is corrupting to make it easier for blue-chip athletes to be admitted to colleges and universities, but not so if one adjusts admission requirements for political reasons.

According to Barnes, large-scale sports on campus corrupts higher education on many fronts. First, he sees institutions as having developed “corporate” organizational behavior that undermines traditional academic relationships between faculty and students, as administrations grow and impose their own agendas upon education. What is missing in this critique, however, is why this development occurred in the first place. Instead, it just happens, and we are to condemn the outcome but not ask harder questions.

Second, because some sports programs—and the conferences behind them—are more successful than others, Barnes sees inequality at work, a manifestation of the ugliness of capitalism. After decrying what he sees as a “wealth gap” in the United States, he writes:

“Within a free market, Division-I college athletics departments must relentlessly exploit the sources that can enhance the commercial success of their programs. Such factors have the potential to create varying levels of such success, leading to the inequalities seen in the market today. The problem is, allowing market forces to determine the commercial outcomes of the schools within the market flies in the face of what is considered proper college athletics administration—which focus on student wellbeing and equality—and undermines the competitive balance of the industry.” (p. 151)

“The threats to the competitive balance within NCAA Division-I athletics endanger the entire existence of the industry as a commercial enterprise. Because spectators tend to demand less of a product as outcomes become more certain, it becomes important for governing bodies of sports leagues to create and maintain policies and procedures that enhance competitive balance.” (p. 151)

But what kind of “competitive balance”? Financial? The National Football League has a huge revenue-sharing program that prevents many of the so-called wealth disparities, yet despite the financial windfall that comes to them, the New York Jets still are awful and have been awful for a long time. Other teams, such as the Detroit Lions, have long dwelled in the competitive basement.

Is Barnes advocating limits to keep some programs (like the football programs at Alabama or Clemson or basketball programs such as we see at Duke or Kentucky) from becoming too strong at the expense of others? My alma mater has lost to the Nick Saban-coached Alabama Crimson Tide fourteen years in a row. Should we break up Alabama and send some of those blue chippers to Vanderbilt or Mississippi State? Barnes doesn’t say, and probably for good reason, since as long as sports exists, one will never be rid of unequal outcomes.

I have not touched on Barnes’s commentary on athletes and accusations of sexual assault, or on other aspects of this book. On a positive note, it has a wealth of information about the history of the NCAA, Title IX, and other aspects of college sports, and is well-researched. If one is doing extensive research of NCAA Division-I athletics, this book will be very helpful.