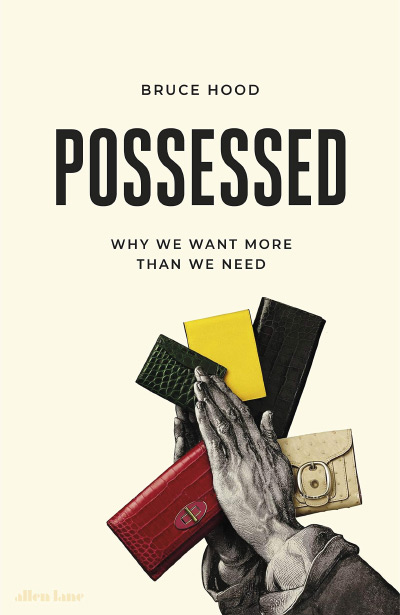 Possessed
Why We Want More Than We Need
Bruce Hood
Kindle Hardcover Paperback
This book review is a web exclusive for the Fall 2020 issue of The Independent Review.

As a rare economist who questions whether more is actually better in wealthy societies, I hoped to learn a lot from Bruce Hood’s Possessed: Why We Want More than We Need. Hood, professor of developmental psychology at the University of Bristol, concludes that most of us “behave as if we are possessed” by our possessions—“as if there is some external influence that is controlling us” (p. 160). He attributes this to evolutionary and cultural forces, which make us behave irrationally: “Our irrational behaviour arises because we identity too closely with what we think we own. ... We overvalue what we have and are reluctant to let it go because it represents who we are, but we also easily get used to most of our possessions. We set out to acquire more stuff in a relentless, yet ultimately unfulfilling, quest to enhance who we are. This may lead us to feel more successful, but the paradox is that in accumulating more stuff, we are increasingly less satisfied” (p. 157). In addition, he writes, “If we were content with ownership, then we would stop acquiring more stuff. But the combination of the thrill of the chase, the need for status and the crippling sense at the prospect of loss reveal that ownership is one of the strongest human urges and does not easily respond to reason” (p. 158). Hood argues that this has been going on for a long time, but the urgency of the problem has risen because future generations will be worse off as our possession by possessions destroys the planet.

Hood reports that “around thirteen thousand first-year students were interviewed in the 1970s and asked their reasons for attending college. The most common reason given was to make money, but those who rated themselves as more materialistic ended up being, on average, more dissatisfied with their lives twenty years later” (p. 101). Excluding some interesting social-science findings, such as this one, a bit of prospect theory from behavioral economics, and evidence about the habituation effect of neuron firing, these concerns and arguments presented by Hood are actually fairly ancient.

So, Hood sheds some light on this problem, but the book is handicapped by continual overstatements and by assertions that we’re largely irrational creatures. Few of the people I know actually live as though they “have the goal of accumulating as much stuff as possible, in the belief that this is our purpose in life” (p. ix). Likewise, I suspect that few people you know act this way, but exaggeration seems to be hardwired.

Hood ventures far from his expertise as a psychologist in tackling the issue of wanting more than we need. The topics are often interesting, but the conclusions can be jarringly uninformed and his judgments cynically harsh. “Kindness is difficult to reconcile with classical economic models that are largely influenced by thinkers such as ... Adam Smith” (p. 74), says someone who cites Smith’s The Theory of Moral Sentiments but didn’t notice its core argument about how societies form a moral consensus and develop moral virtues like benevolence. Smith explained the roots of kindness better than almost anyone else. Later, Hood explains that “for centuries, economics was dominated by mathematical models of supply and demand proposed by the likes of Adam Smith” (p. 135). Anyone who has read Smith will be quite amused by this assertion. Rather than mining Smith’s insights on kindness, Hood concludes that “for every philanthropist there is some building, prize, award, grant, wing, or ward named after them” (p. 79). It’s all part of “moral self-licensing,” by which we feel OK to do something dicey because we’ve given so generously—and even anonymous givers are hypocrites who bask in the “imagined praise” of others (p. 87). Altruism doesn’t seem to exist in Hood’s world, and we’re told that “there is very little evidence that religious people are more generous than nonreligious people” (p. 78), backed up with a footnote to a single short study from 1973. Hood omits any reference to Arthur Brooks’s Who Really Cares: The Surprising Truth about Compassionate Conservatism (New York: Basic Books, 2006). Brooks finds that people who attend religious services weekly (or more) are 25 percentage points more likely than others to donate money and 23 percentage points more likely to volunteer time. Their average annual giving is more than three times higher on average.

How severe is our addiction to more stuff? Hood claims that when mechanization caused output to soar in the late 1800s and early 1900s, it “created a substantial problem of overproduction. Falling production costs meant that fewer labour hours were required, but rather than shortening the working week, business leaders decided to raise wages in order to increase the buying power of households to sustain the demand for goods” (p. 93). This statement is wrong on so many levels that it’s hard to mention them all—as if business leaders impose the terms of employment on workers, as if a producer would think that paying his own workers more would meaningfully boost the demand for his own output, and as if the length of the work week didn’t fall substantially during this period. In fact, between 1860 and 1920, the average workweek in American manufacturing fell by about sixteen hours. Not too shabby. (See my dissertation, “The Shortening of the American Work Week: An Economic and Historical Analysis of Its Context, Causes and Consequences” [University of Pennsylvania, 1990].) On the same page, Hood also airs simplistic ideas on the causes of the Great Depression in the United States. Earlier he asserts that “globalization has generated considerable wealth in the West by exploiting cheap labour in other countries, but this has created the conditions where the poorest are forced to survive on less. ... The quality of life that we enjoy in the West is achieved through the inadvertent misery we cause by demanding cheaper and cheaper products” (p. 8). The explosion of wealth that trade has created in the poorest countries goes unnoticed. (For the explosion of wealth, see, for example, Max Roser’s “Global Economic Inequality” (https://ourworldindata.org/global-economic-inequality). See also, Benjamin Powell’s Out of Poverty: Sweatshops in the Global Economy [New York: Cambridge University Press, 2014], which documents and explains how the “exploitation” of workers in poor countries works to their great advantage.)

Hood also writes, “Before we even take possession, our brains are savouring the prospects of gain. Once we own them, we endow our possessions with excessive value because they are an extension of our self,” and this begins early in life with innocuous teddy bears and never loosens its grip (p. 148). His bottom line is that we need to reprioritize our lives and focus more on experiences. I generally live my life this way, as I’m not a fan of “stuff” and garages that are so crowded that there’s no place to park your car. But people vary in uncountable ways, so a good rule of thumb is that each person is in the best position to balance and rebalance their own lives—though it’s important to learn from others. As we reprioritize away from goods, don’t experiences run into the habituation effect too? They do for me. Going to a baseball game or a concert may beat buying more junk that will end up in your self-storage unit, garage, basement, or attic, as Hood suggests. But, eventually, too many games or concerts mean that the last one doesn’t satisfy much and ends up in the attic of your mind amid the rest of the clutter. Hood suggests that “compared to material consumption which tends to be a solitary affair, experiences by their nature tend to be social events involving other people” (p. 115). Or not. My own material consumption—my home, car, meals, and more—has tended to be shared with my wife and family. And then there are all those hours people spend “experiencing” things alone binging on Netflix or worse.

But, says Hood, we’re trapped—addicted to material possessions because “we are more self-assured that we are successful if we can see our possessions. Not only do we signal our self to others through our possessions, our possessions signal back to us who we are” (p. 120). If so, perhaps we should cultivate the virtue of being oblivious to one another’s possessions—and to our own. At least this used to be considered a virtue—embodied in the commandments against envy and warnings against Mammon. Hood advises that we need to teach our children “a set of ownership values that deny unbridled self-interest” (p. 68). Everyone I know does this, but unfortunately, the thoroughly secular perspective that Hood advances makes this harder to do.