Is the Welfare State Crowding Out Government’s Basic Functions?
An Update
By Jody W. Lipford, Sydney Patton
This article appeared in the Summer 2020 issue of The Independent Review.

Is government spending on social welfare displacing expenditures on the functions of government that Adam Smith deemed essential to a well-functioning country? An analysis of trends suggests that Smith would be deeply troubled by U.S. federal, state, and local government spending priorities.

What should the proper role of government be? The question is an old one, surely dating to the origins of human societies. In today’s world, views range from anarchy to totalitarian socialism, with most people preferring a role for government between these extremes. Since the twentieth century, government’s role in most Western societies has expanded, with this expansion rationalized by (purported) market failures (Bator 1958), the Great Depression, and the subsequent Keynesian Revolution, which stipulated the need for government policies to stabilize macroeconomic fluctuations.[1]

In the United States specifically, the tide of history is on the side of expanded government. Robert Higgs (1987) documents the increased role of government from the late nineteenth century through the 1980s, focusing in particular on the crises of the two world wars and the Great Depression as impetuses for larger government. Taking a longer view, Alan Greenspan and Adrian Wooldridge (2018) trace the economic history of the republic from its origins, telling the story within the broad contexts of productivity, creative destruction, and politics. The latter expands to dampen the downsides of creative destruction, and, like Higgs, Greenspan and Wooldridge find that the Progressive movement and the New Deal “put an end to the era of laissez-faire” and ushered in a “much more activist government” (25).

In an earlier issue of The Independent Review, Jody W. Lipford and Jerry Slice (2007) appealed to Adam Smith and his landmark work An Inquiry into the Nature and Causes of the Wealth of Nations ([1776] 1976) as a benchmark of the proper roles of government in society. Smith argued that government’s roles, though vitally important, must be limited to three: national defense, the administration of justice, and the provision of public goods. Examining national and state/local government expenditures, Lipford and Slice found that the share of government spending going to the duties of government that Smith advocated was declining, while the share of government spending on social welfare was increasing.

We begin by looking briefly at Smith’s ideas on the role of government. We then present the updated trends in national and state/local government spending, showing that the share of expenditures on the functions that Smith thought important continues to decline, whereas the share of expenditures on social welfare continues to rise. We close this paper with a brief discussion of the implications of these spending trends for the future.

Adam Smith and the Proper Role of Government in Society

Eighteenth-century England was hardly a bastion of unrestrained capitalism, and Adam Smith wrote against the very visible hand of government in mercantilist England. The mercantilist system of Smith’s day promoted national economic and military prowess through a system that today might be called state-directed capitalism. Mercantilism stressed the accumulation of gold and silver, positive trade balances, state-granted monopolies, producer-favoring regulations, colonization, regulated wages and guilds, and care for the poor.

Against this backdrop, Smith wrote The Wealth of Nations, in which he expounded the necessary but limited roles of government. His position, stated succinctly in book 4, chapter 9, is:

According to the system of natural liberty, the sovereign has only three duties to attend to; three duties of great importance, indeed, but plain and intelligible to common understanding: first the duty of protecting the society from the violence and invasion of other independent societies; secondly, the duty of protecting, as far as possible, every member of society from the injustice or oppression of every other member of it, or the duty of establishing an exact administration of justice; and, thirdly, the duty of erecting and maintaining certain publick works and certain publick institutions, which it can never be for the interest of any individual, or small number of individuals, to erect and maintain; because the profit could never repay the expense to any individual or small number of individuals, though it may frequently do much more than repay it to a great society. ([1776] 1976, 687–88)

Smith included educational institutions among the public institutions which government should erect and maintain, arguing they are “beneficial to the whole society, and may, therefore, without injustice, be defrayed by the general contribution of the whole society” (815). He elaborated on each of these duties in book 5, chapter 1.

Government Spending in the U.S.: An Analysis of Trends

To measure national-government expenditures on the government duties that Smith advocated, we calculated spending on national defense, administration of justice, transportation, education, and training and employment. To measure expenditures on social welfare, we calculated spending on labor and social services, health,Medicare, income security, and Social Security. For each category, we divided these expenditures by total government spending. The results for the years from 1962 through 2024 are shown in figure 1. (A link to tables with these data can be foundwith the online version of this paper.)According to the data, as a share of the total national-government budget, spending on Smith’s priorities has declined steadily, and spending on social welfare has risen steadily,[2] with the latter surpassing the former in 1973. Further, these trends and the best-fit lines through them show no signs of changing. At the national level, spending on Smith’s priorities is projected to be less than one-fifth of total spending by 2022, while the share of social welfare spending will continue to account for more than three-fifths of the total. These trends support the hypothesis that social welfare expendituresmay be crowding out expenditures on Smith’s priorities at present or likely will do so in the future. 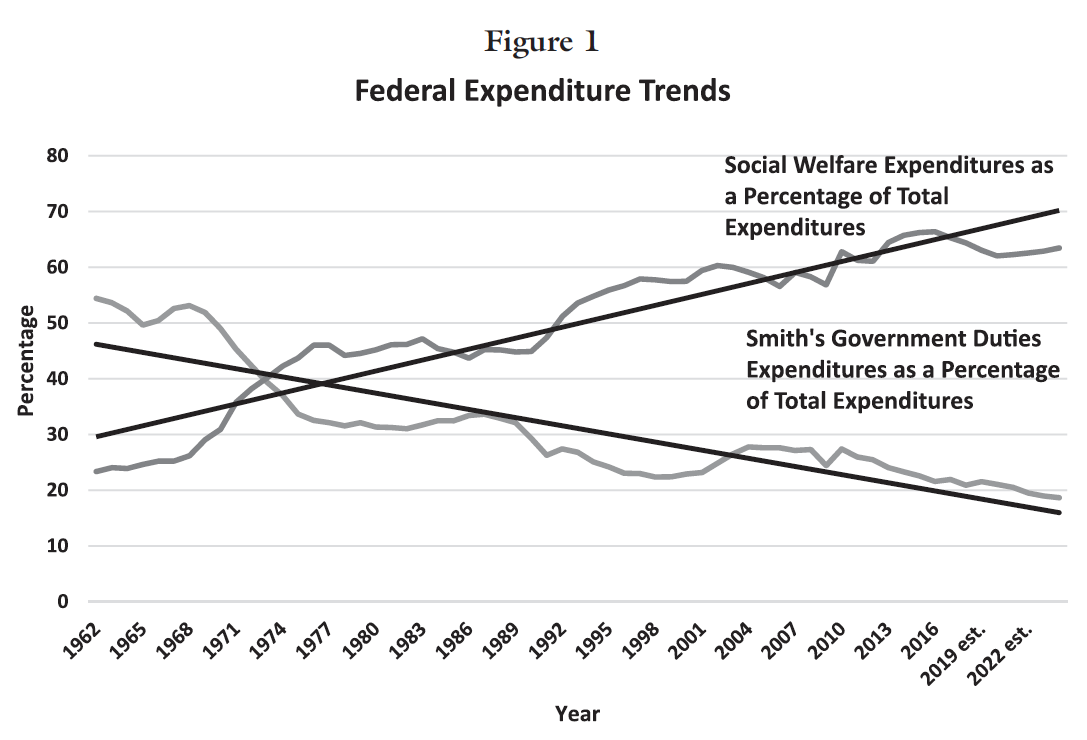 Trends for state and local government spending are similar, if less extreme. We measured expenditures on the government roles that Smith advocated as the sum of spending for public education, highways, police and fire protection, and administration. For social welfare expenditures, we summed spending for welfare, health and hospitals, and insurance trust funds, using annual data from 1960 to 2016. As shown in figure 2, spending on Smith’s priorities is greater than spending on social welfare, both expressed as a share of total spending, but the gap between these expenditure classes narrowed to little more than five percentage points by 2016. If these trends continue along the trajectories given by the best-fit lines, social welfare spending will surpass spending on Smith’s priorities after 2026, indicating that at the state and local government level too, funding for the functions of government that Smith deemed essential may be threatened by social welfare spending.[3]

The stage is set for still greater government spending in the United States. The Democratic Socialists of America are calling for “major social investments,” and Representative Alexandria Ocasio-Cortez (D–N.Y.) and Senator Ed Markey’s (D-Mass.) Green New Deal would require substantial infrastructure investments (see Democratic Socialists of America n.d.; Sierra Club n.d.). Some of these expenditures, such as upgrades to roads, bridges, and water systems, would qualify as public works in Smith’s priorities, but others, such as universal government health care and guaranteed jobs, would redistribute income. Further, plans to promote solar and wind power would finance energy sources that, given present technologies, are generally more expensive than traditional fossil fuels. Like the mercantilism that Smith attacked, these proposals would necessitate substantial government-planning inroads into the economy. 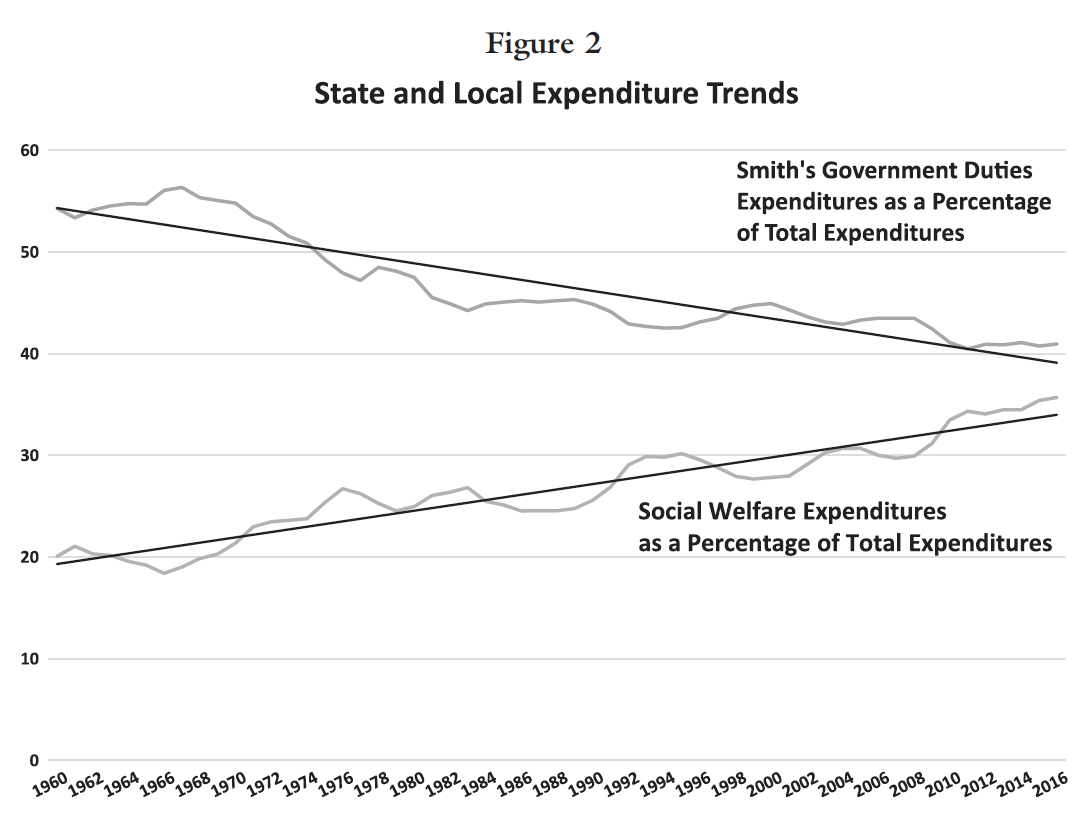 The level and composition of future government expenditures in the United States will be the result of political confrontations, the outcomes of which are hard to predict. Nevertheless, the Congressional Budget Office (CBO) has expressed concerns over the direction of spending trends. In its 2018 Long Term Budget Outlook (2018), the CBO forecasts rising deficits and debt and worries that rising debt and interest payments may put “pressure on the rest of the budget,” reduce federal investment spending, and compromise “national security by constraining military spending in times of international crisis” (4, 9). Reductions in the government’s ability to provide basic infrastructure and to protect the country from foreign aggression run contrary to Smith’s views of government’s essential functions.

Whether current trends play out in the long run and whether the CBO’s concerns are realized will depend on economic, political, and ideological battles yet to be fought. We may say with certainty, however, that if Adam Smith rose from the grave, he would be duly concerned that the functions of government he deemed essential for a wellfunctioning country and society may be threatened by other spending priorities.

[1] On the other hand, Lipford 2007 provides evidence that economic freedom results in less macroeconomic volatility.

[3] Of interest, unlike the case of the national government, spending for health care (health and hospitals) at the state and local level has diminished as a share of total social welfare spending, falling from about 30 percent from the 1960s through the 1980s to a little more than 22 percent in 2016.

Sierra Club. n.d. What Is the Green New Deal?

Smith, Adam. [1776] 1976. An Inquiry into the Nature and Causes of the Wealth of Nations. Indianapolis, Ind.: Liberty Press.