A survey of more than 24,000 physicians conducted online by Medscape last February found that twice as many doctors believe that new federal medical practice guidelines will harm patients than believe the guidelines will benefit patients. Those guidelines, part of the federal healthcare overhaul, were inspired by the valid observation that a lot of medical care is haphazard and mediocre, but they are the wrong solution and may create more harm than good, according to Independent Institute Research Fellow John C. Goodman, author of Priceless: Curing the Healthcare Crisis.

“Medical practice guidelines that serve as a handy checklist can be an aid to good medical care,” Goodman writes in his latest op-ed. “As I explain in Priceless, however, the danger is that high-quality medicine will take a back seat to ‘cookbook medicine,’ That’s what happens when the checklist substitutes for the doctor’s best judgment.”

Goodman suggests that there is little evidence that paying doctors and hospitals for performance improves health outcomes. One study he cites—conducted by the federal Centers for Medicare and Medicaid Services—found that hospitals that operated under “pay-for-performance” guidelines initially achieved higher performance scores than hospitals in the control group, but the superiority in health outcomes vanished after 5 years. Goodman worries that the federal guidelines, along with the quiet shifting of Medicare patients into Accountable Care Organizations, will create perverse incentives to withhold care from patients. Even though “the latest pilot programs show that paying doctors and hospitals for performance doesn’t improve quality,” he writes, “we are about to usher in the era of big brother medical care.” 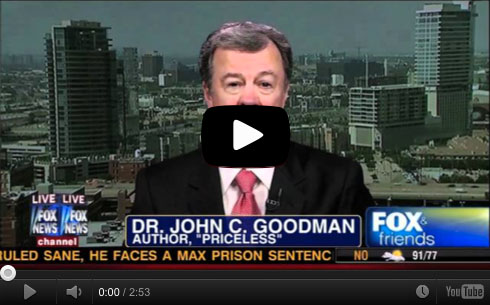 2) What the U.S. and Brazil Can Learn from Mexico’s Economy

With 34,000 Mexicans killed in drug-war violence since President Felipe Calderón took office in 2006, it’s not surprising that the U.S. media has underreported the good news about Mexico’s economy. That neglect is unfortunate. Mexico’s success story offers lessons for other Latin American countries but also for its neighbor north of the Rio Grande.

One can learn a lot about what’s gone right in Mexico by looking at a country that has taken a different path: Brazil. A decade ago, the investment bank Goldman Sachs issued a paper that identified Brazil as one of four countries poised to become an economic global powerhouse. (The others were Russia, India, and China.) Since then, however, Brazil’s government has raised taxes, tariffs, and business regulations, contributing to last year’s lower economic growth rate of 2.7 percent, compared to a 4.4 average growth rate for the past five years. As Independent Institute Senior Fellow Alvaro Vargas Llosa noted in April, if President Dilma Rousseff can’t reverse the statist tide, “Brazil will march backward, producing ripple effects that will be felt beyond Brazil’s borders.”

In comparison, Mexico has managed to tame the interventionist impulse—not withstanding its prosecution of the drug war. “Whereas Brazil, like the United States, has debt-burdened consumers, Mexico has had manageable debt, low inflation, 17 years of macroeconomic tranquility, and thus investors in the automobile, aerospace, and electronics sectors banging down the door to get into the country,” writes Ivan Eland, director of the Independent Institute’s Center on Peace & Liberty. Mexico, it’s worth noting, also managed to improve its economic policies without falling prey to the kind of hysteria that U.S. politicians have demonstrated about the deficit-reduction measures slated to take effect automatically on January 1, 2013. Continues Eland: “Paying heed to its southern neighbor’s success through frugality in debt management, Congress should do nothing and let the ax fall on New Year’s Day.”

Lessons from the Poor: Triumph of the Entrepreneurial Spirit, edited by Alvaro Vargas Llosa

The Summer 2012 issue of The Independent Review is hot off the press! This exciting issue addresses a wide range of topics in political economy and related subjects, including the following questions:

4) Think Tanks’ Deceptive Defense Cuts Are Better than Nothing

There’s good news and bad news for advocates of fiscal sanity in defense spending. Two prestigious think tanks in Washington, DC, have issued reports that may foreshadow improvements in how the political establishment will discuss defense budget cuts. The Center for a New American Security proposes additional cuts of $500 billion to $550 billion over ten years, and the Center for Strategic and International Studies calls for a one-third reduction in the Pentagon budget. Unfortunately, although the proposals will make it easier to talk about cuts beyond those approved by Defense Secretary Leon Panetta and his boss in the Oval Office, they are much less significant than they appear, according to Independent Institute Research Fellow Winslow T. Wheeler.

Wheeler discovered that the think tanks use budget baselines that are woefully outdated. The first proposal would cut up to $550 billion from the level mentioned in an October 2011 report—but that’s only $150 billion below Obama’s 2013 defense budget plan. The second proposal is a one-third reduction from the defense budget’s 2010 peak—but that’s only a 20 percent reduction from the 2013 plan. By using an outdated baseline instead of the current budget plan, these recommendations rely on an old Washington, DC, trick. They are, as the saying goes, old wine in new bottles.

“Such elixirs are frequently quaffed in Washington to provide pretend relief from the sobering demands of fixing a malfunctioning Pentagon and its budget,” writes Wheeler. “Purportedly recommending ‘deep’ spending cuts, and how to reform a Pentagon increasingly seen by the public as disproportionately overfunded and poorly managed, both propose neither meaningful cuts nor significant change.” But at least they help make it easier to talk about larger defense budget cuts. “In Washington, that’s progress: a step forward but a much smaller one than the authors would have you think,” Wheeler concludes.

How States Can Control Their Spending
Carl Close (6/22/12)

Nothing Outside the State: Non-Profit Edition
Mary Theroux (6/20/12)

You can find the Independent Institute’s Spanish-language blog here.