The American healthcare system is fraught with bad incentives that raise the cost of healthcare, reduce its quality, and make care less accessible than it should be. To fix it, the United States should move away from a third-party payment system and lift the impediments to free-market prices in healthcare. Unfortunately, Obamacare takes the diametrically opposite approach and will make many problems worse. This is the theme of the provocative new Independent Institute book, Priceless: Curing the Healthcare Crisis, by John C. Goodman, an economist noted for his development of the concept of Health Savings Accounts. In addition to explaining the origins of the current mess and the fatal flaws of the Affordable Care Act, Goodman offers numerous correctives that draw from common-sense economics and a recognition that American healthcare is a complex system that cannot be micromanaged by government bureaucrats or other third parties.

“Under the conventional approach, every doctor, every nurse, every hospital administrator will get up every morning and ask, ‘How can I squeeze more money out of the payment formulas today?” Goodman writes in his Introduction. “My answer is just the opposite. Under the approach I will recommend, all these people will be encouraged to start each day by asking, ‘How can I make my service better, less costly, and more accessible to patients today?’”

With the U.S. Supreme Court expected to decide the constitutionality of parts of the new healthcare law within a week, the publication of Priceless is very well timed. In addition to the law’s individual mandate, Goodman identifies the provisions most in need of repeal and replacement. Those include various measures that create perverse incentives for insurers to attract the healthy and avoid the sick, and for individuals to game the system by dropping their coverage after they receive care and their medical bills are paid. Goodman concludes by explaining the principles for healthy healthcare reform, including promoting genuinely portable insurance policies whose prices are determined in a free market. “Portability, we have seen, is about the only rational solution to the problems of pre-existing conditions,” he writes in his final chapter. “Without it, employers and employees face all manner of perverse incentives in the labor market.”

“John Goodman has long been the clearest and most insightful healthcare thinker.... It’s time we acted on his common sense, fact-based wisdom in Priceless.” —Mitch Daniels, Governor of Indiana

And please be sure to catch John C. Goodman on the following programs: 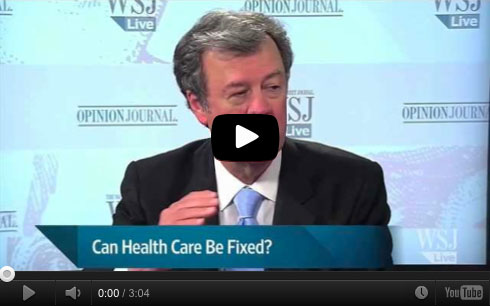 2) Obama and the Coming Oil Glut

The White House would like to show its “toughness” on Iran by imposing stringent economic sanctions, but it fears that higher oil prices from a smaller world supply of oil would hurt President Obama’s re-election prospects. Luckily for the administration, Saudi Arabia, a staunch foe of Iran, has signaled its willingness to increase oil production in order to offset any reduction of Iranian oil exports (and, truth be told, Iran will likely find ways to work around the sanctions). Moreover, greater Saudi production—along with increased energy supplies from Brazil and Canada, improved energy efficiency, and lower energy demand due to a weak world economy—make it likely that oil prices will fall before November, according to Ivan Eland, director of the Independent Institute’s Center on Peace & Liberty. This is good news for the White House.

“Because of the likely oil glut, the oil price will stay low for the election, while Obama retains the symbolism of ‘doing something’ about Iran’s nuclear program,” Eland writes in his latest op-ed.

In other words, the Obama energy policy is the stuff of smoke and mirrors, Eland argues. Perhaps the greatest deceptions—self-deceptions, that is—are that oil is a “strategic” commodity that warrants U.S. intervention in the Persian Gulf and that it is imperative for the United States to move toward “energy independence”—myths that Eland refutes in his latest book, No War for Oil: U.S. Dependency and the Middle East. “Contrary to popular belief, the United States doesn’t currently import that much of its oil from the Persian Gulf and will likely import less in the future as production in the United States and Western Hemisphere rises,” Eland continues. “Therefore, given these facts, the American taxpayer and consumer should wonder why the U.S. spends inordinate sums on military forces to ‘defend’ Persian Gulf oil and constantly meddles in the affairs of Middle Eastern countries.”

“Ivan Eland has produced a devastating indictment of the ‘oil rationale’ for the intrusive, counterproductive U.S. military presence in the Middle East. No War for Oil should help debunk the most prominent justification for that misguided policy.” —Ted Galen Carpenter, Cato Institute

Anyone who has watched CSI and similar television crime shows is aware that forensic science has made great strides since the days of LAPD Sergeant Joe Friday on Dragnet. And yet, the science is only as good as the practitioner, as a 2009 report from the National Academy of Science revealed. Case in point: digital forensics—the investigation of evidence left on computer hard drives, cell phones, and the like—is still an “emerging” discipline that many forensic analysts have yet to master. In fact, inexperienced forensic “experts” run the risk of creating false convictions that send innocent people to jail, as Independent Institute Research Fellow Roger Koppl and digital forensics consultant Monique M. Ferraro explain in a new op-ed.

For example, a police officer with limited digital forensic training mistakenly claimed that a defendant downloaded and deleted files on the basis of the officer having found data in “unallocated space” on the defendant’s computer, even though other explanations for the data were possible. Another example: forensic examiners have concluded that files have been “intentionally downloaded” on defendants’ computers even though it is impossible to reach that conclusion without a videotape showing the defendant downloading a file.

“We need higher standards and more professionalism in digital forensics,” Koppl and Ferraro write. “And we need to give digital forensics the sort of close scrutiny that all other forensic science disciplines have been getting in recent years.”

Digital Devices and Miscarriages of Justice, by Roger Koppl and Monique M. Ferraro (The Daily Caller, 6/15/12)

The Pursuit of Justice: The Law and Economics of Legal Institutions, edited by Edward J. Lopez

4) An Appeal for Liberty

Today is the Prime Time for Liberty! Please join the Independent Institute as we continue our highly successful communication campaign to promote the ideas of liberty across the world. In just the past year, we have seen our social-networking presence grow exponentially, reaching 5.4 million people through social media each month—an increase of 2,035 percent from a year ago! In addition, we are promoting the message of liberty to a new generation through our Challenge of Liberty Summer Seminars, with the high school seminar underway this week and the college seminar coming up in August.

To support Prime Time for Liberty, please become an Independent Institute member, or renew your membership, by visiting our donation page. Thanks to generous donors, every new or increased donation made in the month of June will be matched. Please take advantage of this special opportunity to double the impact of your contribution!

Is There a Trade-Off Between Economic Growth and Equality?
Randall Holcombe (6/12/12)

You can find the Independent Institute’s Spanish-language blog here.