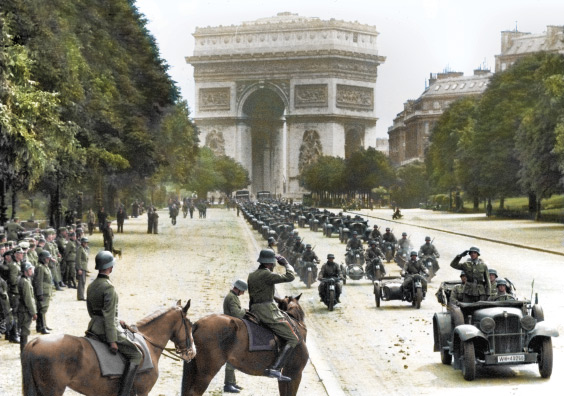 In 2013, Independent Institute Senior Fellow, legal scholar and historian Stephen P. Halbrook, who has won three cases in the U.S. Supreme Court, caused a major stir with the publication of Gun Control in the Third Reich, the first book to focus on how the Nazi government used gun-ownership records to disarm domestic political foes and “enemies of the state.” Halbrook now deploys his investigative and storytelling talents to reveal another forgotten chapter of World War II history in his latest book, Gun Control in Nazi-Occupied France: Tyranny and Resistance.

Drawing on newly discovered documents from German and French archives, diaries, and newspapers of the time, Gun Control in Nazi-Occupied France tells the story of France’s pre-war political convulsions, its restrictions of free assembly, its gun-registration laws, the Nazi German invasion and occupation, the repression and execution of gun owners, popular resistance and—ultimately—liberation.

While historians have ignored the story of gun control in France, Halbrook cautions that it is only one of many factors that caused and shaped the occupation. “Yet it cannot be questioned that France’s nightmare in that era with firearm registration, prohibition, and confiscation, enforced by the firing squad, suggests a telling lesson: be careful what you wish for.” Halbrook’s latest book is also another implicit reminder of the wisdom of the American Founders and their guarantee of the individual right to armed self-defense embodied in the U.S. Constitution’s Second Amendment.

2) What to Do about Drones? A Symposium

Once known only as military weapons or hobby toys, drones (or unmanned aerial vehicles—UAVs) are predicted to play increasingly visible roles in a broad range of industries, including fire control, industrial inspections, crop dusting, real estate listings, and retail delivery. What does the age of the drone mean for human freedom and well-being? In his introduction to the symposium in the summer issue of The Independent Review, journal co-editor Christopher J. Coyne stresses that UAVs offer significant potential benefits, but also pose new risks such as more lethal power and opportunities for civil-rights violations.

Whatever rules emerge for dealing with risks to personal privacy, technology policy expert Ryan Hagemann recommends that they be flexible enough to cover other new technologies that also threaten privacy. As for mitigating clashes over increasingly crowded airspace, Independent Institute Research Fellow Randall G. Holcombe calls for making drones responsible for avoiding all other aircraft, manned and unmanned alike. Along with reducing airspace congestion far more efficiently than the current air-traffic control system, this one rule change would also make the system more decentralized and responsive.

But what of government’s use of drones for national security purposes? Law school professor Milena Sterio explains that the covert status of counterterrorism and military campaigns makes a thorough assessment of government UAVs impossible. Moreover, the executive branch’s ability to act as the judge, jury, and executioner raises major concerns for the rule of law. Closing the symposium, Coyne and Independent Institute Research Fellow Abigail R. Hall examine what they call “the drone paradox”: the possibility that military drone strikes to combat terrorists may actually provoke non-state terrorism. After surveying numerous reports, Coyne and Hall conclude that anti-U.S. militant groups have taken advantage of U.S. drone strikes for propaganda and recruitment purposes.

Obamacare has created perverse incentives that foul up the workings of health insurance markets. The key problem: dumping. Group plans have incentives to dump sick patients on the smaller, pricier individual market, and individuals have incentives to wait until they become sick before seeking coverage. It creates a major paradox, according to Independent Institute Senior Fellow John C. Goodman. “The more states do to stabilize their individual markets, the greater the incentive employers will have to dump even more costs into them,” Goodman writes in a recent column at Forbes.

Fortunately, the problem has solutions—provided Congress makes changes to federal law. First, if a sick customer in an employer-based plan loses her job due to illness and must therefore enter the smaller, pricier individual market, then Goodman’s recommendation would require the group plan to compensate the individual plan for the extra cost to insure the new customer.

Second, Goodman would require insurers in the individual market “to pay for any above-average costs created when an enrollee leaves their plan for some other market. These two measures are designed to discourage bad actors from gaming the market. The most fundamental reform, however, would be to roll back federal regulations barring actuarily sound insurance premiums. Such regulations are one of the main roots of dumping that so badly plagues today’s health insurance markets.

The States Could Reform Obamacare If Only We Would Let Them, by John C. Goodman (Forbes, 5/29/18)

4) Beyond the North Korean Summit

With last week’s historic summit with North Korea, the United States has taken an important first step toward national rejuvenation. If the meeting between Donald Trump and Kim Jong Un puts America on the path toward withdrawing its military presence on the Korean peninsula—and in East Asia more broadly—the United States will have an opportunity to shore up its ominous financial position while maintaining, and even improving, genuine national security, according to Independent Institute Senior Fellow Ivan Eland.

Such a move would be long overdue. “American leaders as diverse as Jimmy Carter and Donald Rumsfeld have expressed during their tenures in office that the presence of U.S. forces in South Korea had become obsolete,” Eland writes at RealClear World. South Korea’s once underdeveloped economy now outproduces its northern neighbor by a factor of forty. Seoul, and for that matter Tokyo, possesses ample financial and technological resources to provide for the defense of its countrymen.

Even with U.S. retrenchment, the United States would still possess military bases in Hawaii and Guam adequate to dissuade any rash governments from attacking the American homeland. Moreover, a military pullback would reduce the threat of war with a rising China, the type of clash historically common to dominant hegemons who face an emerging rival. Eland offers a model for avoiding such a war: “In the early 20th Century, Britain surrendered its global economic dominance to the United States and withdrew from the Western Hemisphere.” The analogy may not be exact—analogies rarely are—but then rarely have the stakes been so high, given an overextended U.S. military umbrella and a $21 trillion national debt that poses the twin risks of mass inflation and economic stagnation.