To a packed audience at Youngstown, Ohio’s Covelli Centre last July, President Trump reiterated his campaign proposal for mass deportations. While his basic message was familiar, he managed to convey it with a memorable incident—a gruesome crime committed by illegal immigrants. The real story, however, is that such incidents are anomalies for immigrants in the United States, not representative data points. According to Independent Institute Research Fellow Abigail R. Hall, illegal immigrants are much less likely to commit violent crimes than are native-born Americans.

“In fact, extensive research shows that native Americans are nearly twice as likely to be incarcerated as illegal immigrants and more than 3 times as likely as legal immigrants,” Hall and co-author Michael Coon write in an op-ed for the Mercury News. “When we hear fear-mongering about immigrants, we should remember that immigrant outlaws are outliers—not the norm.”

Trump’s fear-mongering, on the other hand, can worsen America’s crime problem. “Several reports have already demonstrated that victims of domestic violence refuse to testify against their abusers for fear of being deported,” Hall and Coon continue. “Under a policy of mass deportation, that fear would spread to other types of crime, leaving criminals free to victimize immigrants.” The president’s heated rhetoric, in other words, creates a chilling effect that can exacerbate the very problem he wishes to solve.

2) Census 2020 Likely to Violate the Constitution

The Constitution is the law of the land, but the U.S. Census Bureau is preparing to act beyond its constitutional mandate and to violate other provisions of the federal government’s charter. According to Article 1, Section 2, the national, ten-year census is supposed to entail a headcount of everyone in the United States; the Bureau’s 2020 Operation Plan, however, would avoid such enumeration and, by demanding more information than that to which it’s entitled, would violate the Bill of Rights, according to Independent Institute Research Fellow William J. Watkins, Jr., author of Crossroads for Liberty.

The Supreme Court has interpreted the First Amendment not just as protection of free speech, but also as a prohibition against the government compelling speech, Watkins explains in an op-ed in the Sacramento Bee. Similarly, the Fourth Amendment safeguards personal privacy, and the new census questions would violate that privacy. “The Census Bureau should recognize that questions beyond an enumeration intrude upon our right to be let alone and thus should form no part of the census,” Watkins writes.

“The decennial census is a constitutional necessity, but it need not be an informational fishing expedition,” he continues. Asking nosy questions also opens the door for egregious misuse of information, as when President Franklin D. Roosevelt used census data to round up Japanese Americans during World War II. Restoring the census to its constitutional scope would reduce the threat of such moral abominations in the future.

Dealing with a hurricane is trying under any circumstances. When such disasters hit as hard as 2017’s tempests, they can strain emergency and relief efforts to their utmost limits. Fortunately, helpful technological innovations—in the form of mobile phone apps—are increasingly at people’s fingertips, explains Independent Institute Research Fellow Raymond March.

WhatsApp, the enormously popular messaging tool, has helped connect people in Puerto Rico with their stateside relatives. But there are others apps, too. “CirrusMD, an app which puts patients in contact with physicians via text or video chat, helps provide the displaced with medical care,” March writes in an op-ed for the Sun-Sentinel. “LiveHealth Online, another firm, provides disaster relief with a medical app offering telehealth consultations with physicians and psychologists.”

These and similar mobile apps don’t compensate for the all weaknesses and failures of government-run disaster relief—or, for that matter, the disaster of government licensing laws that limit the supply of doctors, nurses, emergency medical technicians, and pharmaceuticals. For scores of hurricane victims in Texas, Florida, and Puerto Rico, however, such apps have been lifesavers. As March concludes, “The relief they have provided in the last few months has clearly been no drop in the bucket.”

Hurricane Disaster Relief? There’s an App for That!, by Raymond March (Sun-Sentinel, 11/8/17)

4) Gala for the Future of Liberty: Videos Now Up! 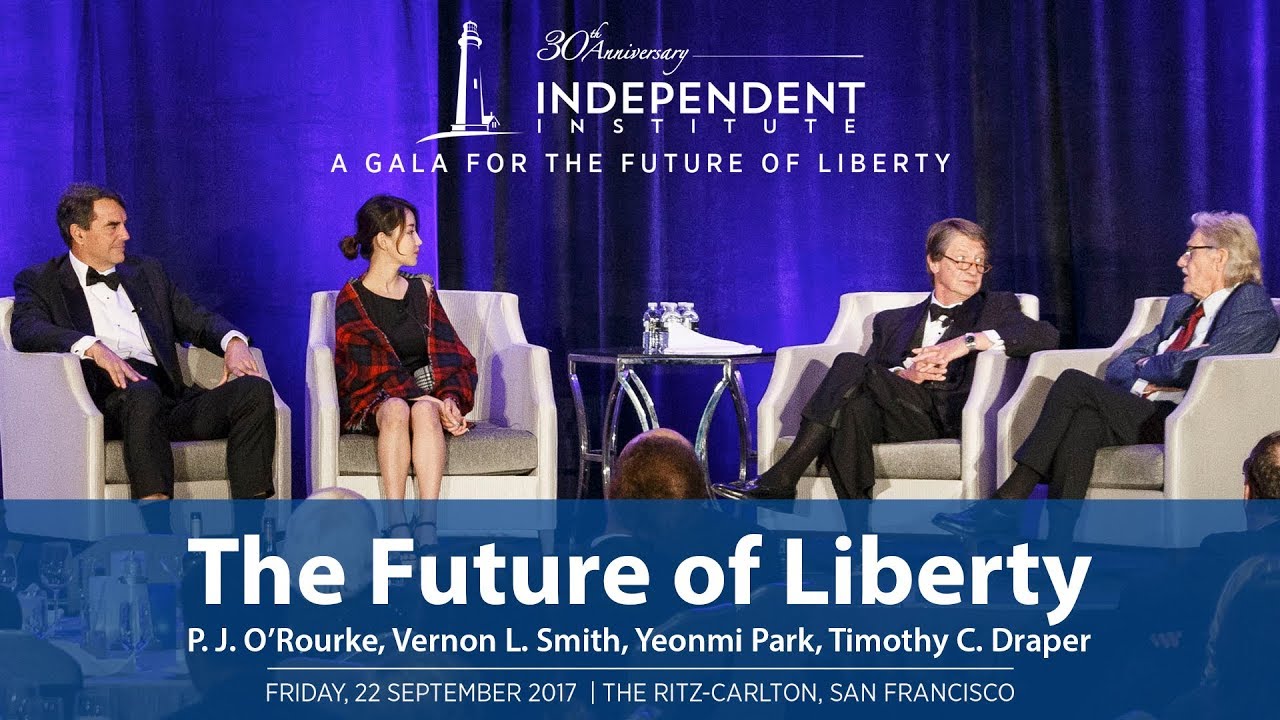 On the night of September 22, the Independent Institute celebrated more than 30 years of our boldly advancing the case for a free society. More importantly, this Gala for the Future of Liberty allowed us to join with our supporters in celebrating the achievements of three champions of free markets, entrepreneurial innovation, and political liberty.

We are delighted to share with you the videos from the Gala, featuring the Alexis de Tocqueville Award ceremony for Nobel laureate economist Vernon Smith, venture capitalist and philanthropist Tim Draper, and North Korea refugee and human rights activist Yeonmi Park. After the awards ceremony, political satirist and best-selling author P. J. O’Rourke, our Master of Ceremonies, facilitated a panel discussion with our three luminaries.

If you couldn’t make it to our Gala, the videos below will give you a taste of the uplifting evening.

Video: Independent Institute: A Gala for the Future of Liberty 2017

Video: A Gala for the Future of Liberty: P.J. O'Rourke, Master of Ceremonies