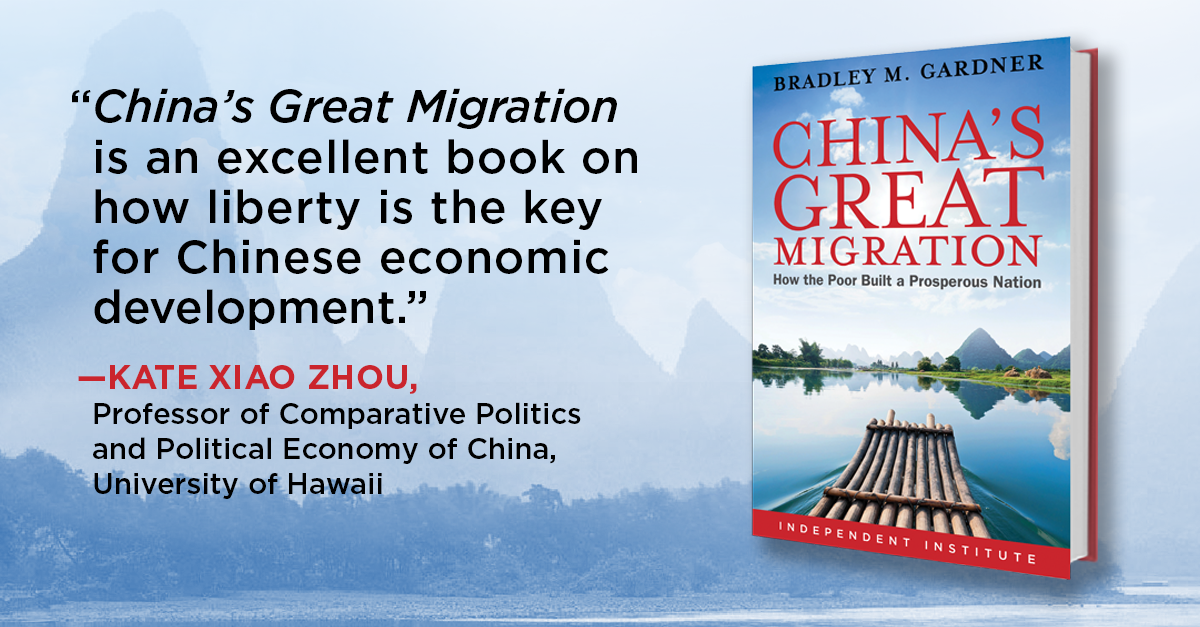 Immigrants are often scapegoats for a country’s economic woes. The best refutation for that assessment may come from China. The largest migration in history has contributed to the world’s most dramatic economic transformation, as millions of Chinese left the agricultural countryside for urban jobs and became the powerhouse of a thriving export sector that has changed global commerce. The shift occurred not because of the government’s economic vision, but rather despite it, as Independent Institute Research Fellow Bradley M. Gardner explains in his new book, China’s Great Migration: How the Poor Built a Prosperous Nation.

The migration began in the 1980s and accelerated in the 1990s, as China’s residence-permit system broke down. Today approximately 292 million urban dwellers were born in the countryside—up from 260 million when Gardner was writing his book last year. The flight to the city is estimated to directly account for about 20 percent of China’s GDP growth from 1990 to 2010. But the migration has also contributed indirectly to economic progress, such as through cluster effects that occur when workers and employers are in relatively close proximity to one another.

China’s economic growth is remarkable, but its continuation is no sure thing, according to Gardner. By the mid 2020s, internal migration will have leveled off, and with it immigration-generated growth. Unless it makes the necessary changes to its backward financial system, bloated state-owned enterprises, and government-finance system (about 30 percent of local government revenues come from illegal asset seizures), China’s total GDP growth will grind to a halt. Gardner, now a full-time U.S. Foreign Service Officer, notes that these opinions are his own and do not necessarily reflect the views of the U.S. Government. Any wonder why?

The largest American riot of the sixties—and the subject of Kathryn Bigelow’s new feature film “Detroit”—erupted in the Motor City on July 23, 1967. Although it lasted five days, its legacy spans decades. As historian and Independent Institute Research Fellow Jonathan Bean explains in a three-part series at The Beacon, “the Detroit Riot marked a turning point in how American policymakers dealt with race.”

To understand the enduring impact of Detroit’s 12th Street Riot—or the Rebellion, as many prefer to call it—it’s essential to know that the classical liberal civil rights tradition had long stressed the need to eliminate racial categorization in public policy (including, but not limited to, government-mandated segregation). Bean’s historical anthology, Race and Liberty in America: The Essential Reader, quotes various civil rights leaders (including Frederick Douglass), organizations (the NAACP), and legislation (the Civil Rights Act of 1964) that emphasized a colorblind ideal. In fact, in the same year as the Detroit Riot, the NAACP railed against classification by race in its brief to the Supreme Court for the famous interracial-marriage case, Loving v. Virginia (also the subject of a movie), as did the Court’s majority opinion in that case. The aftermath of the riot, however, helped reverse the trend.

“The Detroit riot, along with the last wave of riots in 1968, lifted the taboo on discussion of racial preferences,” Bean writes. Presidential candidates Hubert Humphrey and Richard Nixon promised a “benevolent response” to dealing with riots, including government job set-asides based on race. The colorblind ideal then gave way to what sociologist Nathan Glazer called “affirmative discrimination”—a new status quo unlikely to be reversed without a change among society’s leading opinion-makers and elites. “The future of nondiscrimination looks bleak,” Bean writes. “Yet, if there is to be an end to government-sponsored discrimination, the racial categories and check boxes must go.”

50 Years Ago Today: The Detroit Riot and the Decline of Civil Rights Liberalism (I), by Jonathan Bean (The Beacon, 7/23/17)

50 Years Ago Today: The Detroit Riot and the Decline of Civil Rights Liberalism (II), by Jonathan Bean (The Beacon, 7/27/17)

50 Years Ago Today: The Detroit Riot and the Decline of Civil Rights Liberalism (III), by Jonathan Bean (The Beacon, 7/28/17)

Venezuelan President Nicholas Maduro has faced growing opposition—in the National Assembly, in the streets, and in the voting booth. Yesterday the opposition showed its strength through a successful boycott of the election that the president planned for selecting pro-Maduro delegates to rewrite the Constitution. One of the most remarkable things about Venezuela’s civil unrest, according to Independent Institute Senior Fellow Alvaro Vargas Llosa, is how it compares to similar episodes under other autocratic regimes.

Chile under Pinochet, Poland under Jaruzelski, Romania under Ceausescu, and the Soviet Union under Gorbachev—all were striking examples of repressive regimes that came crashing down. Yet according to Vargas Llosa, none appeared the way Venezuela under Maduro looks right now.

Speaking of the July 16 unofficial referendum—a worldwide protest vote against yesterday’s unconstitutional, pro-Maduro election—Vargas Llosa writes: “We have never seen what just happened in Venezuela before—an opposition mounting a successful nationwide referendum in defense of its current constitution, against the hostility of a government that no longer thinks its own Chavez-created constitution is enough to guarantee its perpetuity.”

The Beginning of the End for Maduro’s Venezuela?, by Alvaro Vargas Llosa (Washington Examiner, 7/29/17)

China is spending billions on solar and wind technology, but none of its energy investments surpasses its commitment to coal power. Of the world’s 1,600 coal plants under construction or in the planning stages, Chinese firms are responsible for more than 700 of them. Like it or not, coal will be a leading worldwide energy source for decades to come, according to Independent Institute Senior Fellow William F. Shughart II.

Given the writing on the wall, one might expect climate activists to overwhelmingly support carbon capture and storage (CCS)—an innovative clean-coal technology that yields lower carbon dioxide emissions. Although some do—former Department of Energy Secretaries Steven Chu and Ernest Moniz come to mind—many see it as an unprincipled concession to the supposedly unmitigated evil of coal. Such animosity, however, is counterproductive, Shughart explains in the Washington Examiner. Whether one favors cleaner energy or tilts toward more affordable energy, CCS technology merits a warm embrace, not hostility. Fortunately, mere derision won’t be enough to block the adoption of CCS innovation.

“Dozens of different approaches to carbon capture and storage are under development around the world,” Shughart writes. “All that is needed is for one to prove cost-effective, scalable and replicable.”

5) Gala for the Future of Liberty

On September 22, Independent Institute will host our 30th Anniversary Gala for the Future of Liberty at the Ritz-Carlton in San Francisco. We will celebrate our past successes and look over the horizon by honoring three champions of liberty, entrepreneurial innovation, and human well-being: high-tech venture capitalist Timothy C. Draper; Nobel Laureate economist Vernon L. Smith; and North Korean human-rights activist Yeonmi Park. With bestselling author and political humorist P. J. O’Rourke as our Master of Ceremonies, the Gala is sure to entertain as well as inspire. Please join us!

Independent Institute has job openings at its Oakland, Calif., headquarters. These are rare opportunities to work for a forward-looking, pro-liberty policy organization!