Are American universities approaching “Peak Administrative Bloat”? Some might think so. Consider the following job titles and salary estimates: “Principal Assistant Chancellor of the Office of Strategic Dining Technology, $180,317”; “Associate Executive for the Task Force on Donor Climate, $368,186”; “Assistant Provost for Athletic Maintenance to the Subcommittee for Neighborhood Outreach, $415,314.” Fortunately, those are just make-believe cases taken from the University Title Generator, but you get the point. The joke sounds plausible because it reflects the perception of an underlying reality: administrative bureaucracies and salaries have grown significantly, according to Independent Institute Research Fellow Vicki E. Alger, author of Failure: The Federal Misedukation of America’s Children.

Administrative bloat is one reason that college tuitions have climbed. Research costs are another—and reducing them would ease the student-debt burden. “Shrinking the ranks of nonteaching research faculty and putting professors back to work teaching would help undergraduates access the courses they need while saving them $2,000 to $3,000,” Alger writes.

With current student debt levels so high—$20,000 for about one-half of students completing an undergraduate degree, according to Alger—sensible cost cutting should be a priority for education policymakers. Many state policymakers agree, but that doesn’t always translate into lower tuition and fees. In Oklahoma, for example, state university regents claim to have saved more than $300,000 over the past five years. The darker truth, however, is that students, parents, and taxpayers are still victimized by higher university costs—and by policymakers’ refusal to implement serious reforms.

2) Will Republicans Support a Public Option?

Hillary Clinton is calling once again for a “public option” for healthcare coverage. The apparent death spiral of several state Obamacare exchanges suggests that more politicians will join the chorus. Will any Republicans get on board? Perhaps, but the version most likely to gain support differs markedly from the type that many Democrats favor. As Independent Institute Senior Fellow John C. Goodman explains in his latest piece in Forbes, the recently introduced Sessions-Cassidy health bill can facilitate reforms that amount to a public option, although the legislation doesn’t call it that.

The Sessions-Cassidy bill features a universal tax credit approximately the same size as the federal government’s contribution to Medicaid. State governments could add to this contribution an amount that would leave households holding the same amount of money for coverage whether they wish to purchase a private plan or enroll in a privately administered Medicaid plan. This would make Medicaid competitive with a private plan, provided that numerous Medicaid rules and regulations were lifted and more households were allowed to “opt in.” (There’s more, but we’re simplifying for the sake of brevity.)

Before the passage of Obamacare in 2010, proposals featuring a public option attracted some backing. “Is there any reason to think that [a public option] will attract more backing today than it did six years ago? “Indeed it might,” Goodman writes. “Turns out that some Republicans may be willing to come on board, provided the public option is Medicaid.” In other words, GOP political support depends on what the meaning of the words “public option” is.

Some Republicans Are Just Fine with a Public Option, by John C. Goodman (Forbes, 8/16/16)

The Pentagon’s accounting system has long been held in low regard. In 2013, revelations surfaced that for several years the Department of Defense had falsified its books. More recently, in June 2016, the U.S. Army’s ledgers were discovered to have been “cooked”—by a whopping $6.5 trillion in a single year. Aside from intentional malfeasance and professional incompetence, at least two fundamental factors have driven the accounting scandals, according to Independent Institute Senior Fellow Ivan Eland. One is the enormous size of military budgets—a size far greater than what’s actually needed for defense.

The United States accounts for 37 percent of global defense spending, despite its having geographic advantages (such as two huge oceans and two weak neighbors) that make the nation intrinsically secure. While 9/11 proved that terrorism can pose a deadlier threat to the American homeland than most had previously believed, terrorist attacks are usually blowback in response to U.S. intervention overseas.

While defense policy is one cause of large and therefore more scandal-prone
military budgets, another driver is the permissive attitude of certain politicians—namely, those who think that their advocacy of more defense spending will make them more appealing to voters than their election-year rivals. How might we stop these two drivers of fiscal recklessness? Eland calls for voters to advocate a complete restructuring of U.S. defense, such as “by transferring most of [the U.S. army’s] heavy armored and mechanized divisions into the cheaper National Guard,” Eland writes. “This would make it harder for politicians to get the country involved in overseas quagmires on the ground, but still provide a potent land force capability to mobilize in case a legitimate security emergency arises.”

We Really Don’t Know if the Defense Department Is Providing Security, by Ivan Eland (Huffington Post, 8/26/16)

4) The Well of Wisdom Down Under

The American West is parched, and water can be the focus of acrimonious political battles. Near Santa Barbara, Calif., for example, a court is deciding the fate of a 200,000 acre-feet aquifer underneath the 725-acre Slippery Rock Ranch. Both sides of the dispute—ranch owner/TV producer Dick Wolf and the Goleta Water District—claim ownership of the water. According to Independent Institute Policy Fellow K. Lloyd Billingsley, water policy would be a lot more acrimonious if the United States followed Australia’s lead.

What does Australia do that much of the United States doesn’t? It relies on water markets. A major prerequisites of well-functioning market, of course, are well-defined property rights. Along with reducing wasteful litigation, this enables water to be sold for its highest-valued use. It incentivizes sensible conservation, and it fosters the flexibility needed to creatively manage water supplies during times of drought.

“California would be better served by a system of tradable water rights, a proven success in Australia,” Billingsley writes. “Instead of additional controls, what Californians need is a solution. That can be found Down Under.”

Aquanomics: Water Markets and the Environment, edited by B. Delworth Gardner and Randy T Simmons 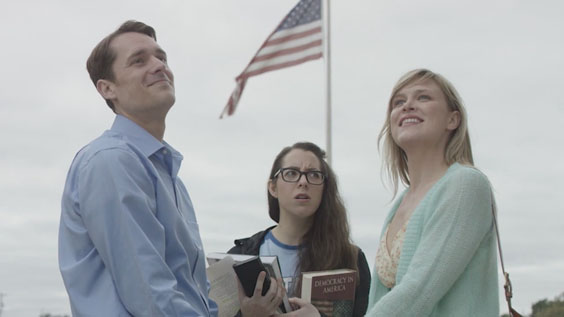