1) Exposing War Crimes Is Not a Crime

Military prosecutors claimed that PFC Bradley Manning was guilty of “aiding the enemy.” A federal judge dismissed that charge—the most serious of the lot—but the army intelligence analyst still faces many other counts, which could keep him behind bars for the rest of his life. The key ethical question, one that may be debated for decades to come, is this: Was Manning’s unauthorized distribution of war videos, diplomatic cables, and top-secret documents to the WikiLeaks organization treasonous—or was it legitimate whistleblowing? According to Independent Institute Research Fellow Anthony Gregory, the author of The Power of Habeas Corpus in America, the latter label applies: Manning did Americans a favor by exposing war crimes—such as the execution of ten innocent civilians in Ishaqui, Iraq, in 2006, and the use of air strikes to cover up any evidence.

“War criminality ranks among the most important types of government wrongdoing warranting transparency,” Gregory writes in the Daily Caller. “The American people need to understand what U.S. occupations are like.”

As Gregory notes, Barack Obama might have agreed with that assessment way back in 2008: During his first presidential campaign Sen. Obama called for greater transparency and protection for government whistleblowers. But you can’t find statements to that effect on the Oval Office website—they’ve recently been removed. Perhaps that’s because the White House is embarrassed by the dramatic difference between Obama’s original promises and the current reality—that the Obama administration is prosecuting twice as many people for leaking classified information under the Espionage Act as all previous administrations combined. Gregory continues: “This is the administration: Nearly unparalleled secrecy, daily scandals, a surveillance state unbound by law, unilateral presidential wars, indefinite detention, the power to kill any terrorist suspect anywhere without a hint of due process, a politicized regulatory state collecting limitless data and harassing political opponents at home, and the persecution of whistleblowers using an anachronistic law from the darkest days of American civil liberty.”

Guilty of Aiding the American People, by Anthony Gregory (The Daily Caller, 7/30/13)

The Power of Habeas Corpus in America: From the King’s Prerogative to the War on Terror, by Anthony Gregory 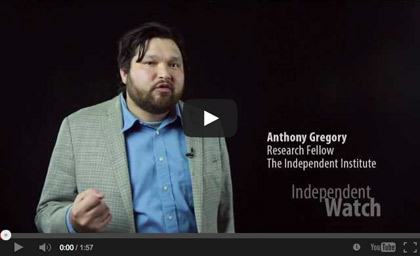 Much of today’s immigration debate centers around border security—which may explain the title of the legislation the U.S. Senate passed in June: The Border Security, Economic Opportunity, and Immigration Modernization Act. The bill would require that the Department of Homeland Security apprehend 90 percent of those attempting to enter the United States illegally (up from the current estimated interception rate of 50 percent). But unless Americans wish to live in a police state with a sluggish economy, such a goal is unrealistic, according to Independent Institute Senior Fellow Alvaro Vargas Llosa, author of the new book, Global Crossings: Immigration, Civilization, and America.

“A country’s obligation to uphold the rule of law and fight terrorism cannot hang on the ability to seal off the borders and enforce police-state controls, which is what, taken to its logical conclusion, the security-based approach of some immigration critics would mean,” Vargas Llosa writes.

Moreover, the notion that porous borders significantly raise the risk of terrorism is overblown. “One third of the forty-eight al Qaeda operatives who committed crimes in the U.S. between 1993 and 2001 were residents or citizens, while another third had visas,” Vargas Llosa continues. The problem wasn’t lax border enforcement, but the failure of the intelligence and law-enforcement communities. “Surely a flexible, realistic immigration policy that does not generate illegal entries is a better way of making sure everyone operates within the law and of helping counterterrorism policy separate the law-abiding wheat from the terrorist chaf,” he concludes.

Detroit’s bankruptcy is due in no small measure to a single government policy: the city government promised its workers more and more, but it refused to set aside sufficient funds to pay for these benefits. More than half of the Motor City’s $18.25 billion debt represents unfunded retirement liabilities. The lesson? “It’s that when governments promise benefits they are unwilling to pay for, the system can very quickly come to resemble something designed by Bernie Madoff,” writes Independent Institute Senior Fellow John C. Goodman, author of Priceless: Curing the Healthcare Crisis.

Had a private corporation acted like Detroit’s politicians—promising employees a defined-benefit plan but not funding it annually—the company’s officers would have landed in legal hot water. Not so for government officials. Perhaps this is why some experts estimate that the total amount of unfunded state and local retirement liabilities ranges from $3.1 trillion to $4.4 trillion.

“It really doesn’t matter whether public employees are under-paid or over-paid,” Goodman continues. “What matters is that city government pay for whatever they promise at the time the promise is made and do not try to shift those costs to future taxpayers. Put differently, government at all levels (including the federal government) should have to play by the same rules that government the private sector.”

The U.S. “pivot” toward East Asia—a strategy meant to contain the power of a rising China—will succeed only in worsening relations between Washington and Beijing, and in reducing America’s long-term security. That’s the thesis of a recent piece by Independent Institute Senior Fellow Ivan Eland published in the Huffington Post.

The rise of China on the world stage is, at root, the by-product of the country’s growing economic strength. This is one reason why analogies with the Soviet Union—which the U.S. attempted to counter with its policy of containment during the Cold War—ultimately fail. Moreover, several factors, including hawkish rhetoric from Japan’s new government, add extra risk to U.S. policies that Beijing would see as confrontational. Peace and security could easily evaporate, raising the risk of an all-out military conflict.

Americans, Eland suggests, should keep a worst-case scenario in mind. “Any danger that East Asian allies would obtain nuclear weapons pales in comparison to the threat of U.S. cities being incinerated to protect these countries in purely regional squabbles with their neighbors,” Eland writes. “If put to average American citizens in this way, which it should be, most people would probably agree that it makes no sense to essentially commit national suicide to save rich countries that are perfectly capable of defending themselves.”

The Failure of Counterinsurgency: Why Hearts and Minds Are Seldom Won, by Ivan Eland

The Economic Sector the President's Policies Have Helped Most? Firearms
Randall Holcombe (8/1/13)

What a Program for Bureaucrats Tells Us about Obamacare
John C. Goodman (7/31/13)