←  ABOUT US
About
›
Research Fellows, In Memoriam
›
Person Detail
S. Fred Singer 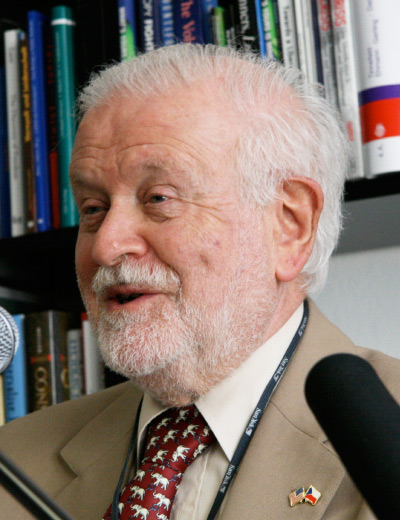 Dr. S. Fred Singer (1924–2020) was a Research Fellow at the Independent Institute, Professor Emeritus of Environmental Sciences at the University of Virginia, President of the Science and Environmental Policy Project, a Fellow of the American Association for the Advancement of Science, and a Member of the International Academy of Astronautics. He received his Ph.D. in physics from Princeton University.

Dr. Singer served as Vice Chairman of the National Advisory Committee on Oceans and Atmospheres; Chief Scientist for the U. S. Department of Transportation; Deputy Assistant Administrator at the U. S. Environmental Protection Agency; Deputy Assistant Secretary at the U. S. Department of the Interior; Dean of the School of Environmental and Planetary Sciences, University of Miami; (First) Director of the U. S. Weather Satellite Center; Director of the Center for Atmospheric and Space Physics, University of Maryland; and Research Physicist, Upper Atmospheric Rocket Program, Johns Hopkins University. He has also been a visiting scholar at the Woodrow Wilson International Center for Scholars; Jet Propulsion Laboratory, California Institute of Technology; National Air and Space Museum; Lyndon Baines Johnson School for Public Affairs, University of Texas; and the Soviet Academy of Sciences Institute for Physics of the Earth. He is the recipient of the White House Special Commendation, Gold Medal Award from the U.S. Department of Commerce, (First) Science Award from the British Interplanetary Society, and Honorary Doctorate from Ohio State University.

Dr. Singer is the author or editor of fourteen books on climate science, energy, and environmental issues as well as the author of over 400 articles in scientific and public policy journals plus over 200 articles in popular publications, Dr. Singer was featured in articles in Time, Life, and U. S. News & World Report, and he wasn interviewed on Nightline, Today Show, News Hour, Nightwatch, and other national and international television programs.

He co-authored the New York Times bestseller, Unstoppable Global Warming: Every 1500 Years (Rowman and Littlefield, 2007), and he was also the organizer of NIPCC (Non-governmental International Panel on Climate Change) and lead author in 2008 of its summary report, Nature, Not Human Activity, Rules the Climate.