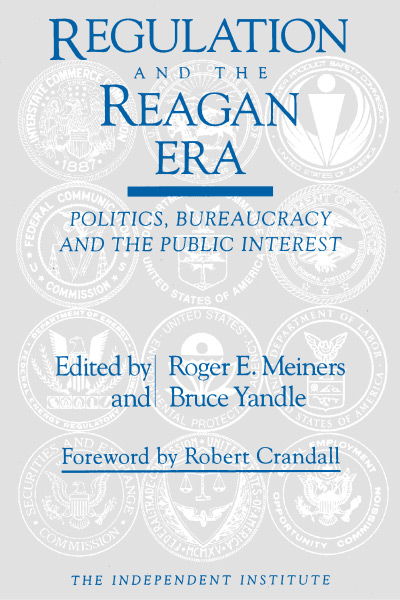 Was the so-called Reagan Revolution a disappointment? Many of the Administration’ s friends as well as its opponents think so. But under what criteria? To what extent? And why? As President Reagan’ s final term wanes, these questions seem worth pondering.

The Independent Institute book does just that. Entitled Regulation and the Reagan Era: Politics, Bureaucracy, and the Public Interest , this volume of fourteen essays is edited by Roger E. Meiners and Bruce Yandle. Meiners is Professor of Ecoinomics at the University of Texas at Arlington and Yandle is Alumni Professor of Economics at Clemson University. Both served during the Reagan Administration with the Federal Trade Commission (FTC).

The rest of the book’s seventeen contributors are either professional economists or legal scholars who held policy-making posts in various federal agencies during the Reagan Era. They thus provide a unique combination of sophisticated theoretical knowledge and real-world bureaucratic experience. Robert W. Crandall of the Brookings Institution, caps off the volume with a distinguished introduction.

Regulatory reform is the explicit criterion against which this assemblage measures the Reagan Revolution. “The contributors to this volume,” write Meiners and Yandle in their introductory chapter, “favor either deregulation or regulation that embodies a greater degree of economic rationality.” Indeed, they are all well steeped in the public-choice insights of Nobel Laureate James Buchanan. Recognizing that politicians and bureaucrats display the same self-interested behavior as the rest of us, the authors appreciate why regulation invariably benefits those special interests with sufficient resources and power to influence government policy.

This underlying theoretical perspective is spelled out in the book’ s first section, which offers a current survey of the economic literature on regulation. According to Robert McCormick (Clemson University), the literature empirically substantiates one “abiding theme”: “As long as there is monopoly in police power, there will be strategic use of regulation.”

The seven chapters in the book’s second section then concretely examine the Reagan record on deregulation. Drawing from personal experiences, the contributors assess the successes and failures differently. One chapter co-authored by Thomas F. Walton (General Motors) and James Langenfeld (FTC) admits that the Reagan agenda of regulatory reform failed at the Environmental Protection Agency but claims considerable success at both the FTC, where the authors worked, and the Occupational Safety and Health Administration. The people appointed to head these agencies, in Walton and Langenfeld’s opinion, ultimately explain the varied outcomes. “[W]here sound arguments for cost-effective and market-based regulatory approaches can be made, they will find their way into administrative practices and judicial interpretations.”

William C. MacLeod and Robert A. Rogowsky, who are both still at the FTC, likewise see deregulatory gains at that agency -- in the realm of consumer protection. But a third chapter by another former FTC economist, William F. Shughart II (University of Mississippi), does not render such a favorable judgment. Shughart believes that the mostly minor gains could be easily erased under future administrations. “Perhaps the best that can be said is that better people can make better government, but only temporarily.”

The same concern troubles George W. Douglas (private consultant) and Peter Metrinko (attorney). Their contribution to Regulation and the Reagan Era foresees the Department of Transportation assuming the regulatory tasks of the defunct Civil Aeronautics Board. Still more pessimistic is Lloyd R. Cohen (George Mason University Law School), who discusses the International Trade Commission, an agency that Cohen considers—despite (or because of?) having worked there—“arguably the most socially costly.” On no other policy question is there a greater consensus among professional economists than on the superiority of international free trade. Yet the Reagan Administration’s progress in fighting protectionism was dismal at best.

Particularly illuminating are the chapters on privatizing federal lands and deregulating telecommunications. At first glance these two cases appear diametrically opposite, constituting the Reagan Revolution’s most conspicuous failure and success respectively. But the intricate interplay of state and national politics makes them similar.

Robert H. Nelson (Department of the Interior) shows in the case of federal lands that the Administration’s equivocal shift towards outright land sales in early efforts to balance the budget alienated western interests. The powerful “Sagebrush Rebellion,” sympathetic at first, came to fear that privatization would terminate the long-established access to the federal domain enjoyed by many Westerners. The Administration’ s fiscal imperatives thus threatened the livelihood of those possessing “homesteaded” rights to the public lands. The resulting inability to enlist the support of local interests ultimately doomed this deregulatory effort entirely.

In the case of telecommunications, John T. Wenders (University of Idaho) recounts how deregulation proceeded only so far as it could play various conflicting interests off against each other. Further deregulation is now stalled at a political impasse. State regulators continue to block any introduction of competitive phone service locally, and allowing the local phone companies to enter the long-distance market would have the anomalous effect of eliminating the one political wedge that might pry open these monopolies. In short, both federal lands and telecommunications seem to buttress Nelson’ s observation that “social change in America requires a marriage of ideology with interest group pressures.”

Although the contributors to the book’s second section differ in their appraisals of the Reagan record, they all still display some overall disappointment about deregulation’s pace. “There were two distinct reactions to the November 1980 election returns in the corridors of the building on Pennsylvania Avenue which serves as the headquarters of the Federal Trade Commission,” writes Shughart. “Although one was positive and the other negative, both were based on the feeling that important changes were on the horizon.”

But as Meiners and Yandle point out: “Now with the regulatory reform of the Reagan administration finished, not one major agency has been abolished. The real estate market in Washington, D.C., did not collapse; the federal government still employs hundreds of thousands of career employees to run the same agencies they ran before the advent of the Reagan administration.”

Expressing disappointment about the Reagan Revolution is one thing. There are and will soon be other books that do merely that. Explaining why Reagan’s deregulation did not live up to expectations is something else altogether. It is to this more challenging question that the five chapters in the third section of Regulation and the Reagan Era turn. In the process, they make intellectual contributions to public-choice theory.

Public-choice traditionally has looked upon politicians and bureaucrats as power brokers, providing political privileges to those special interests willing to pay the most. This alone makes the prospects for regulatory reform dim. But the chapter by Fred S. McChesney (Emory University Law School) argues that the self-interest of politicians, in and of itself, encourages additional harmful legislation that benefits no outside group whatsoever. Elected officials have an independent incentive to use their political authority to extort campaign donations and other payments.

Politicians also have strong incentives to be unprincipled and inconsistent, as the chapter by Richard L. Stroup (Montana State University) explains. Special interests, whether they are buying political privilege or simply protection from political extortion, are not going to waste money on legislators whose minds are already made up, irrespective of which way the legislator predictably intends to vote.

Whereas McChesney and Stroup explore the incentives facing politicians, Roger A. Rogowsky (in his second contribution to the book) and Daniel K. Benjamin (Clemson University) explore the incentives facing bureaucrats. Rogowsky details how entrenched bureaucracies have successfully evaded the wishes of Congress and the President in order to pursue their own regulatory agendas. Benjamin presents a more theoretical model of bureaucratic inertia. “At times,” he writes, “the system reminds one of a cluster of Lilliputians attempting to move an elephant . . . ; unless (almost) all the actors agree on a decision and push in the same direction, nothing happens.” Together the chapters of Rogowsky and Benjamin suggest that one of the foremost institutional obstacles to regulatory reform is the Civil Service System.

These contributions all help dispel any illusions about the vulnerability of government regulation. But by so doing they turn the question around. Where we previously wondered why the Reagan Revolution generated so little genuine deregulation, we now marvel that it generated any at all. No matter how superficial and transitory the change, even the most disappointed advocate of regulatory reform must concede, in the words of Meiners and Yandle, that “the world today is different from what it was when Ronald Reagan took office, and so is federal regulation.”

Perhaps the answer lies within the musings of Alan Rufus Waters (California State University, Fresno) in the final chapter of Regulation and the Reagan Era. Building on the hints strewn throughout the other chapters, Waters seems to imply that individuals within government can make a difference, but only if they are willing to forego personal short-term gain in order to sustain implacable integrity. But this timely and unique volume also clearly demonstrates that such ideological commitment within the corridors of Washington will be in vain, unless it is reinforced from the outside by mass public pressure that stems from an equal commitment and integrity.

Buy Regulation and the Reagan Era