←  ABOUT US
About
›
Senior Fellows
›
Person Detail
William Happer 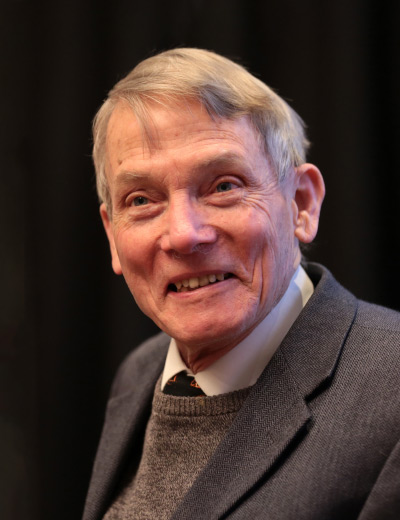 William Happer is Senior Fellow at the Independent Institute and the Cyrus Fogg Brackett Professor Emeritus in the Department of Physics at Princeton University. He is a specialist in modern optics, optical and radiofrequency spectroscopy of atoms and molecules, radiation propagation in the atmosphere, and spin-polarized atoms and nuclei. He is also noted for work in climate-related physics.

Dr. Happer received a B.S. degree in physics from the University of North Carolina in l960 and the Ph.D. degree in physics from Princeton University in l964. He began his academic career in 1964 at Columbia University as a member of the research and teaching staff of the Physics Department. While serving as a Professor of Physics he also served as Co-Director of the Columbia Radiation Laboratory from 1971 to 1976, and Director from 1976 to 1979. In l980 he joined the faculty at Princeton University. On August 5, 1991 he was appointed Director of Energy Research in the Department of Energy (DOE) by President George W. Bush. While serving in that capacity under Secretary of Energy James Watkins, he oversaw a basic research budget of some $3 billion, which included much of the federal funding for high energy and nuclear physics, materials science, magnetic confinement fusion, environmental and climate science, the human genome project, and other areas. He remained at the DOE until May 31, 1993 to help the Clinton Administration during the transition period. He was reappointed Professor of Physics at Princeton University on June 1, 1993, and named Eugene Higgens Professor of Physics and Chair of the University Research Board from 1995 to 2005. From 2003 until his retirement in 2014, he held the Cyrus Fogg Brackett Chair of Physics. From 2018 to 2019 he served as Deputy to the President and first Senior Director of Emerging Technologies at the National Security Council.

From 1987 to 1990 he served as Chairman of the Steering Committee of JASON, a group of scientists and engineers who advise agencies of the Federal Government on matters of defense, intelligence, energy policy and other technical problems. He was a trustee of the MITRE Corporation from 1993 to 2011. He served as Chair of the Board of the Richard Lounsbery Foundation from 2016 to 2018. He was the first President of the CO2 Coalition. From 2002 to 2006 he chaired of the National Research Council’s Standing Committee on Improvised Explosive Devices that supported the Joint Improvised Explosive Devices Defeat Organization of the Department of Defense. He was a Co-Founder in 1994 of Magnetic Imaging Technologies Inc. (MITI), a small company specializing in the use of laser polarized noble gases for magnetic resonance imaging. He invented the sodium guidestar that is used in astronomical adaptive optics to correct for the degrading effects of atmospheric turbulence.

Hot Talk, Cold Science (2021)
Global Warming’s Unfinished Debate (Revised and Expanded Third Edition)
Foreword 2021
Articles
Harmful Politicization of Science
Book Excerpt Apr. 22, 2021
How to Think about Climate Change
Presentation Mar. 11, 2021
The Staff of The Best Schools Interviews William Happer
Interview Mar. 24, 2020
In Defense of Carbon Dioxide
The demonized chemical compound is a boon to plant life and has little correlation with global temperature.
Commentary Apr. 9, 2013
Global Warming Models Are Wrong Again
The observed response of the climate to more CO2 is not in good agreement with predictions.
Commentary Mar. 28, 2012
Statement of William Happer Before the U.S. Senate Environment & Public Works Committee
Congressional Testimony Feb. 25, 2009
Video and Audio
Is There a Climate Crisis? The Science Says Not Now and Not in the Future | William Happer
Video Other Events Feb. 19, 2021