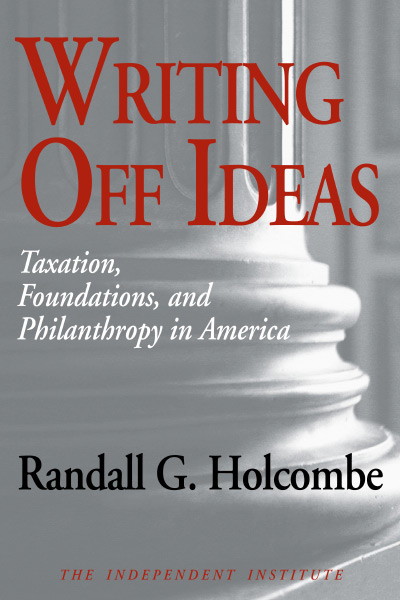 In the late 20th century, tax-exempt foundations have grown substantially both in their financial importance and in the scope of their activities.Today, a large accelerating percentage of wealth is being placed into foundations for tax purposes. Writing Off Ideas now examines the economic, cultural, and intellectual implications of tax-exempt organizations.


Writing Off Ideas provides a much-needed comprehensive exploration of this largely unknown sector of society.

“In Writing Off Ideas, Randall Holcombe examines ‘how tax laws affect the ideas that are financed by nonprofit foundations,’ and explores whether the laws ensure that foundations act within the public interest when it comes to the ideas they produce. The book is a thorough examination of donor intent, and the role of trustees, in the process of producing public policy ideas follow. Throughout Writing Off Ideas, Holcombe maintains a balance tone, as he is intent on delivering information as evenhandedly as possible. The work is scholarly in nature, and though primarily concerned with the economic influences of foundations, it is an absorbing study that can be appreciated by anyone interested in foundations or public policy.”
—PHILANTHROPY NEWS DIGEST, The Foundation Center

“Foundations play a large but unexamined role in our culture. Do they operate in the public interest? Are they accountable to anyone? Do they further the goals their founders intended? I know of no better way pursue these fascinating questions than to read Randall Holcombe’s Writing Off Ideas.”
—TYLER COWEN, General Director, Mercatus Center, George Mason University

“Tax-exempt foundations that are involved in the world of ideas possess an overwhelmingly ‘liberal’ bias and are seemingly accountable to no one but themselves. In Writing Off Ideas, economist Randall Holcombe investigates how and why this bias has come about, the role of tax laws in shaping the behavior of foundations, and what, if anything, the public can do to assure that foundations, which enjoy a privileged legal status, act more in the public’s best interest. In light of the massive wealth being amassed by information-age entrepreneurs, the role of foundations in the public policy process in particular and in American life in general, is sure to grow. Writing Off Ideas is a scholarly, thought-provoking, and eloquently-written account of the historical development of tax-exempt foundations and of their likely role in the future.”
—THOMAS J. DiLORENZO, Professor of Economics, Loyola College in Maryland

“We are in the midst of an awesome intergenerational transfer of wealth. This assures that foundations will play an even greater role over the coming decades. Understanding the history of foundations is essential. Only then, can we work most creatively to use foundation resources to advance liberty and values. Writing Off Ideas is the outstanding book on this vital issue.”
—ARNOLD STEINBERG, President, Steinberg and Associates, Inc.

“This thoroughly-written book poses provocative questions about many issues such as accountability in the foundation world. It provides a valuable historical perspective on how tax laws have shaped and continue to impact the development of foundations in the American economy. While I might not agree with all of Holcombe’s assessments, he raises an interesting debate.”
—STEVEN N. HILTON, President, Conrad N. Hilton Foundation

“Randall Holcombe’s Writing Off Ideas is especially timely, arriving as it does at the outset of what will soon be known as ‘The Philanthropic Decade.’ He itemizes the full catalog of foundation issues and argues hopefully, and persuasively, that the most pressing among them—bias, accountability, misallocation of resources—should not be addressed by government intervention.”
—NEAL B. FREEMAN, Chairman, Foundation Management Institute

“Given the contentiousness surrounding foundations from all sides of the ideological spectrum, an analysis of the ideas promoted by foundations and their effect on public policy is most welcome. . . . It is estimated that the children of the Baby Boom generation will inherit $12 trillion by tbe year 2020. In Writing Off Ideas, Randall Holcombe has given scholars interested in studying the effects of this unprecedented intergenerational transfer of funds a strong theoretical foundation.”
—KNOWLEDGE, TECHNOLOGY & POLICY