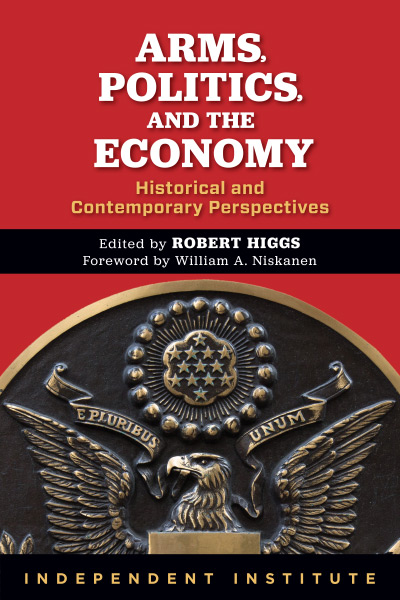 Prior to World War II, the United States maintained insignificant military forces and weapons manufacturing industries during peace. But the weapons industry that has grown since the end of World War II inhabits an ill-defined zone between genuine private enterprise and complete government planning. Does this unprecedented military-industrial-congressional complex efficiently serve the public’s interest in national security?

In this book, eleven contributing scholars analyze such questions as whether overall military spending is too high or too low, why the military procurement system remains impervious to reform, and how special interests exploit the system.

This book does not leave readers with simple solutions; depoliticizing defense spending and eliminating military procurement mismanagement will not be easy. But this book does lay the foundation of understanding to help necessary reforms take place.

“Arms, Politics, and the Economy is not the ordinary book on defense policy, procedures, and practices. It is a major chronicle and critique of the defense establishment, a virtual catalog of the defense business. The book is immensely informative and makes rare sense of the ‘military-industrial-congressional complex.’ The authors’ judgments are shrewd and sound, and the essays are strikingly innovative and intellectually adventurous, and extraordinatrily well-crafted, sophisticated, and scholarly.”
—EARL C. RAVENAL, Distinguished Research Professor of International Affairs, School of Foreign Service, Georgetown University

“Arms, Politics, and the Economy is an immensely timely book! As the international system changes, understanding the domestic political economy of military spending is more important than ever.”
—BRUCE M. RUSSETT, Professor of Political Science, Yale University

“Professor Higgs has performed a real service in presenting such a wide range of views on one of the most important issues now confronting the American people, and the Independent Institute’s timing in publishing it could not be better. Arms, Politics, and the Economy is an important addition to your ‘must read’ list.”
—A. ERNEST FITZGERALD, Author, The High Priests of Waste and The Pentagonists

“The Higgs collection analyzes the relation between the military sector, politics, and the economy in the United States. The book is concerned with the more general relationships between the military and the rest of society and gives a more general treatment for the United States. . . . In this area it is important, however, to consider more than the purely economic arguments and to recognize the limitations of simple economic theory often used in applied studies. This is well illustrated by the collection edited by Higgs. This book provides a useful collection of studies of the United States military industrial complex, from historians, economists, and political scientists. Higgs provides a very useful introduction to the collection, providing an overview of the issues. . . . This book illustrates the range and vitality of the research being undertaken in the analysis of military spending and the economy. It provides a comprehensive coverage of the issues and approaches used in the area and will be of great value to those who wish to enter into the debates.”
—THE ECONOMIC JOURNAL

Robert Higgs is Senior Fellow in Political Economy and Editor of The Independent Review at The Independent Institute in Oakland, California. In addition to Arms, Politics, and the Economy, his books include Crisis and Leviathan, The Transformation of the American Economy 1865-1914; Competition and Coercion; Hazardous to Our Health?; and Emergence of the Modern Political Economy.

War and the Rogue Presidency