As debate accelerates over the declining standards in higher education, academic tenure is viewed with suspicion by many, who see it merely as job protection for incompetent teachers. Even many professors believe tenure is a guarantee of lifelong entitlement, whereby only the commission of a crime can lead to dismissal. Faulty Towers sets the record straight by elucidating the history, legal status, and common misunderstandings regarding tenure.

Tenured professors who have become incompetent are rarely dismissed, and superior teaching is rarely rewarded, although there is little to prevent universities from doing so. Tough administrators are also hard to find—in part because university trustees seldom hold them accountable. Faulty Towers explains how restructuring university incentives to be more in line with those of market-based enterprises would produce greater accountability, stronger boards of trustees, more effective administrators, and a tenure system that protects academic freedom but not substandard education.

In Faulty Towers: Tenure and the Structure of Higher Education, Ryan C. Amacher and Roger E. Meiners examine the internal and external reforms necessary to bring competitive forces to American universities and thereby improve them. Critics of American higher education have good reason to be disturbed by some of the foolishness and waste observed in colleges, but many critics focus solely on tenure. This is a mistake, Amacher and Meiners argue. That tenure appears to protect incompetent professors is merely a symptom of structural defects that limit greater efficiency and even more competition in higher education.

Before its modern incarnation early in the 20th century, tenure existed in the form of “presumptive permanence”; most faculty appointments were year to year, but it was rare for a college not to reappoint all members of the faculty. This changed after 1915, when a learned committee of the newly formed American Association of University Professors (AAUP) recommended tenure guidelines that became widely adopted over the next decade.

The committee’s goal was to ensure quality control. Members hoped to impose higher standards on their own institutions by forcing junior faculty to serve probationary periods rather than be granted tenure by the administration upon initial hiring. They did not intend to make tenure a lifetime sinecure or to protect professors who become incompetent in the classroom by failing to keep up on advances in their fields or by talking about their political views of the world instead of accounting or psychology.

Surprisingly, however, many college trustees and administrators do not understand that tenure does not significantly limit the ability of universities to demand quality performance over time. Although uncommon, tenured faculty who become incompetent, fail to perform their duties, or engage in misconduct are not saved by tenure, according to Amacher and Meiners, who exhaustively reviewed every reported tenure case in American courts from 1990 to 2003.

Tenure gives its holders, not a job for life, but procedural rights in the event that they are terminated for poor performance, misconduct, or financial exigency. Tenure typically confers 1) the right to appear in person at a hearing before a decision-making body, 2) the right to examine evidence and respond to accusations, and 3) the right to have advisory counsel present. Tenure is misunderstood and misapplied, but the fundamental incentive flaws in American academia are elsewhere.

Cracks in the Ivory Tower

The root of the problem facing institutions of higher learning is their non-profit status, Amacher and Meiners argue. As state institutions or charitable enterprises, American colleges and universities lack the discipline of the marketplace—as well as the helpful market signals provided by stock prices. Instead, top management and trustees in academia are guided by much lower quality measures of performance.

These deficiencies contribute to the poor accountability that plagues university governance. Unlike their corporate counterparts, university trustees face almost no chance of liability for bad decisions—hence their passivity. Lacking strong boards of trustees, presidents—who are often nominated by faculty committees—rarely attempt to change the faculty and curriculum. And because trustees and presidents are passive or weak, administrators can skirt their responsibilities by appointing faculty committees and choosing from among their proposals.

Faculty participation—the “democratic” model of university governance—also spawns other problems. Faculty and departments compete fiercely for a larger share of the pie. Uninformed faculty and administrators vote on important matters that affect other parts of a university. University politics are often dominated by faculty who have little else to do with their time while productive people avoid endless committee meetings. Logrolling and the status quo strongly discourage a steady stream of innovations and improvements, which would tend to arise under market-driven governance.

University Reform, Inside and Out

Because the faculty are the most important resource (and cost) of a university, greater emphasis must be placed on managing them more effectively. “Reforming” tenure is likely to be the kiss of death for any administrator (and even board members) and in any case is unlikely to matter much. Given that the existing legal structure of tenure is not a barrier to improvements, trustees and university administrators should take other steps to encourage and reward performance.

Curriculum reform is one internal measure that can help make colleges more dynamic and responsive to the demands of their constituents. To hasten and enforce internal reforms, Amacher and Meiners recommend the following external reforms (among others):

Critics of higher education have good reason to be disturbed by some of the foolishness observed in colleges, but the focus on tenure is misplaced. Substantive reform of higher education should aim to bring stronger trustee oversight and involvement in colleges, more choice for students, more accountability for faculty and administrators, and more competition among our universities by removing many of the bureaucratic constraints we now face.

“When creative people are allowed and encouraged to compete, wealth and opportunities expand,” Amacher and Meiners write. “Our universities can benefit from the wonders of this dynamic process to ensure that the United States remains the leader in freedom of thought and new learning.”

“In Faulty Towers: Tenure and the Structure of Higher Education, I am pleased to see The Independent Institute has produced another useful resource for academics, administrators and all those concerned with educational reform.”
—Diane Aviv, President and Chief Executive Officer, Independent Sector

“Faulty Towers is a welcome contribution to the debate over tenure. It is especially effective in explicating the tensions inherent in protecting academic freedom while addressing instances of professorial incompetence and malfeasance.”
—Henry M. Levin, Professor of Economics and Education, Columbia University

“Faulty Towers has two major strands of thought. First, there are obviously many incompetent professors who need to be removed from the academy, a point made on almost every other page. Second, the organization of universities and the sole authority to run them needs to be turned over to a market-driven,executive administrative branch that is free from the tyranny of faculty involvement with any but the most cursory input. . . . On reflection, this book has many ideas and suggestions worth considering within the structure of one's own institution. I am sure that several have potential and some institutions would benefit from discussing some of the ideas presented.”
—Canadian Journal of Education

“We must seriously reassess the rules and institutions that govern higher education. In the pathbreaking book, Faulty Towers, Amacher and Meiners are clear-headed and courageous guides for this important endeavor.”
—Donald J. Boudreaux, Professor of Economics, George Mason University

“Faulty Towers presents a comprehensive and telling analysis of tenure issues. If followed, the well-argued and sound recommendations would result in better research and teaching, greater faculty and student satisfaction, and more efficient use of funding.”
—Herbert J. Walberg, Emeritus Research Professor of Education and Psychology, University of Illinois at Chicago

“Amacher and Meiners uncloak the mystery of tenure. Faulty Towers is a must read for anyone interested in the very real problems of higher education.”
—John W. Sommer, Distinguished Professor Emeritus, University of North Carolina, Charlotte; former Dean, School of Social Sciences, University of Texas at Dallas

“Faulty Towers is a very catchy title for anyone who has seen John Cleese'scomic masterpiece of the same name, the story of a highly dysfunctional fictional British hotel. This book, however, provides a serious look at the putative problems of higher education in the United States, and suggests some possible remedies. The subtitle, Tenure and the Structure of Higher Education, is deliberately double-barreled, and cleanly anticipates the two major divisions of the book. . . . The argument is developed that private universities (such as Harvard) are the best in the country, and that state universities should be privatized and run using these as a model. The marketplace will determine which universities survive. The general feeling in Canada, where I live and where there are no private universities, is strongly against such a plan. . . . Nevertheless, some of the recommendations made in this volume seem applicable to any system: reducing centralization and excess bureaucracy to allow more responsibility for local decision-making would seem to be good things for almost any system. Some of the other recommendations are perhaps more contentious, such as allowing universities to set their own tuition, introducing a voucher system to allow for increased competition for students, and eliminating public funding for graduate education except for those programs that produce graduates who are in short supply. All of these recommendations are consistent with the market-driven model that the economist authors espouse. They have addressed the general arguments used by left-leaning educators in economic and market terms, and have done so quite powerfully. . . . The authors produce a cogent set of arguments in Faulty Towers that is worth serious study, regardless of one’s political stripe.”
—International Review of Education

Can Teachers Own Their Own Schools? 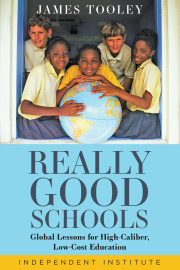