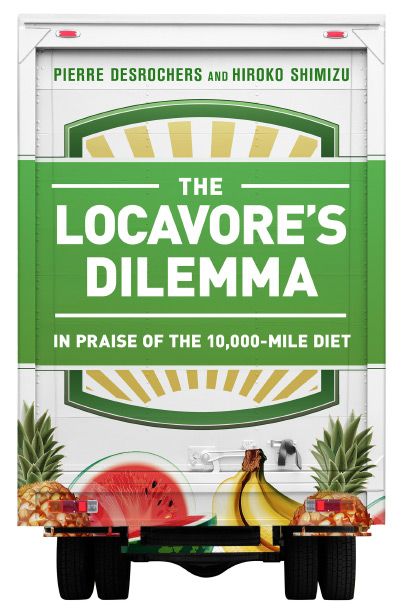 The Locavore’s Dilemma
In Praise of the 10,000-Mile Diet
By Pierre Desrochers and Hiroko Shimizu
Kindle Hardcover Paperback
This book review appeared in the Spring 2013 issue of The Independent Review.

One rarely patronizes a gourmet restaurant these days without finding something on the menu such as Snead’s Ferry she-crab soup or Johnson County fried green tomatoes (two examples from North Carolina)—foods that are made with local ingredients produced by nearby farmers or caught by fishermen plying nearby waters, often individuals who are personally known to the chef.

Such is the case even though it is possible to get fresh Alaska salmon and even New Zealand lamb almost anywhere in the United States.

There is nothing wrong with searching out fresh local ingredients when they are in season, Pierre Desrochers and Hiroku Shimizu say in their new book, Locavore’s Dilemma. Nor is there anything wrong with “hobby” farming. The problem comes when a focus on eating only nearby foods creates a moral imperative against longdistance trade and when that imperative leads to government regulation inhibiting commerce. Their book’s subtitle is In Praise of the 10,000-Mile Diet.

Some readers may have dismissed enthusiasts for “buying local” as romantics who mistakenly interpret current notions about health, the environment, and food security to arrive at the idea of relying on local foods. They are such romantics, indeed, but the push to “eat local” is also seeping into policy. For example, Desrochers and Shimizu report that the U.S. Department of Agriculture has introduced a regulation that gives preference to local farm products in school lunch programs, and a proposed law would spend $200 million to help Americans obtain better access to “fresh, local foods.”

Even more worrisome in the long run is the creation of an edifice of misconceptions built on erroneous antimarket environmentalist notions that may have implications for years to come. We may eventually be expected to pay more for local food, agencies may be required to buy local produce, zoning and regulations may be instituted to foster local agriculture, and pressure may build to keep out foreign products. There is a lot of potential danger in the “buying local” movement, in part because it sounds so benign.

Desrochers and Shimizu learned just how strong the “eat local” movement is after they wrote a policy paper for the Mercatus Center at George Mason University that challenges locavores’ assumptions. They found themselves caught up in a whirlwind of debates with local food activists, who were “often quite taken aback that anyone might sincerely challenge their convictions that nature is inherently wholesome and that tampering with it can only result in catastrophe.”

The debaters probably didn’t know what kind of person they were encountering in the first author, Pierre Desrochers. An associate professor of geography at the University of Toronto, Desrochers combines an Austrian economics approach to geography with a passion for historical research into obscure nineteenth- and earlytwentieth- century writing about commercial practices, resources, and trade. He has, for example, devastated environmentalists’ claims that capitalist enterprises would not recycle or reuse products without governmental pressure. He did so by finding detailed evidence that many firms found uses for waste by-products decades ago. In the meat-packing industry at the turn of the twentieth century, for example, by-products included glue, fertilizer, soap, and oleomargarine, to name a few. As a result, meat packing even spawned new industries.

Moreover, Desrochers has questioned Harvard management expert Michael Porter’s contention that wise environmental regulation can lead companies to greater profits by forcing them to be more efficient. Desrochers used historical writings to show that pursuit of profits, along with legal suits protecting property rights, was a major factor behind waste management well before regulatory pressure began.

Add to that background Hiroko Shimizu’s personal knowledge about her homeland, Japan. In fact, it was a statement by a public speaker, calling Japan the most “parasitical” of all nations because it relies on food imports, that interested the two authors (who are married) in locavore thinking. Shimizu writes about how her parents experienced hunger during and after the World War II, noting that one of the lessons of this experience is that “autarkic food policies” forced on the Japanese people “can only result in disaster.”

The book is organized as a response to five myths locavores offer, such as the claims that local food is tastier and safer and that buying local creates and nurtures communities. In answering these myths, Desrochers and Shimizu delve into the past to consider the fundamental question: “Why had countless individuals worked so hard and for so long to create our globalized food supply chain if things were so great when most food was produced and consumed locally?” Indeed, they point out that even today subsistence farming is what undeveloped nations are trying to get out of, not into. They note that “locavore” movements that sought self-sufficient farming, such as Brook Farm and Fruitlands in New England, arose in the past, and they did not last long.

One of the most plausible myths has to do with “food security.” Locavores argue that agricultural trade and specialization lead to monocultures that in a time of crisis, such as an insect infestation, will destroy large acreages with no diversity of crops to fill in the gaps. Rachel Carson, famed author of Silent Spring, expressed this view and is quoted in the book: “Nature has introduced great variety into the landscape, but man has displayed a passion for simplifying it. Thus he undoes the built-in checks and balances by which nature holds the species within bounds.”

Desrochers and Shimizu respond that large-scale monocultures “have always been part of a much broader geographical division of labor,” and locavores are asking a community to give up that geographical freedom and place “all of its agricultural eggs into one geographical basket” (emphasis in original). Although monocultures can be hit with blight or infestation, they write, the geographical division of labor has made possible the development and use of “numerous plant and animal breeders, researchers combating disease, and countless other experts whose very existence has always depended on the wealth generated by specialization and exchange.” In the “polycultures” of developing countries when disaster occurs, “only a few individuals with limited means can be called upon to perform such measures as crushing bugs by hands or diverting flood waters with picks and shovels.”

Indeed, even one of the highly touted examples of agricultural monocultures, the Irish famine of the 1840s, illustrates that monocultures can cause harm only “in the absence of broader economic development, scientific and technological advances, trade, and labor mobility” (emphasis in original). The blight destroyed Ireland’s potato crop and caused nearly a million deaths. In continental Europe, poor people were also “heavily dependent on potatoes for their sustenance,” but because Europe had more varieties of employment (such as cottage industries or part-time work in the new industries), they were able to buy other food commodities. Of course, to the readers of this journal, such arguments will come as no surprise. This view is Adam Smith redux—arguments for trade and commerce that have never been successfully refuted.

Which brings me to my only real doubt about the book: Was it a waste of time? Should the authors have gone to all their trouble to respond to the locavores’ silly arguments? If it isn’t enough to point out that all of history shows that trade is the underpinning of prosperity, then can locavores ever be persuaded?

A vast amount of research went into this book (each chapter starts with a historical quotation and the notes run well more than 40 pages). Yet as the authors write in their preface, once they began their research, “we quickly realized that there was little in the policy agenda of the present generation of food activists that hadn’t already been argued over, tried, and convincingly disproved many times.” Here, in 190 pages (plus notes and index), it has been disproved again.