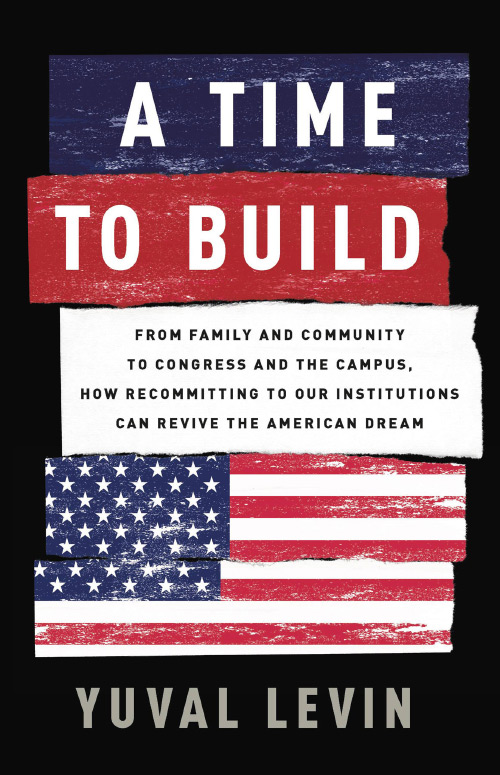 A Time to Build
From Family and Community to Congress and Campus, How Recommitting to Our Institutions Can Revive the American Dream
By Yuval Levin
Kindle Hardcover Audiobook Audio CD
This book review is a web exclusive for the Fall 2021 issue of The Independent Review.

On the surface, Americans don’t have much to complain about. Our material standard of living is approximately the highest in the history of the world. Absolute poverty has been virtually banished. Before COVID hit, the unemployment rate was the lowest in half a century—and after the blip upward it has returned to a level below the average of the 2010s. And we are treated to an endless stream of innovations and new experiences designed to make our lives more fulfilling, interesting, and comfortable.

And yet, argues Yuval Levin of the American Enterprise Institute, “we Americans are living through a social crisis” (p. 11), driven by struggles that are rooted in relational problems, rather than economic concerns. The problem is that people generally don’t experience well-being alone. “Loneliness and isolation, mistrust and suspicion, alienation and polarization—these are the characteristic maladies” today (p. 16). “What we are missing is not simply connectedness but a structure of social life: a way to give shape, place, and purpose to the things we do together. If American life is a big open space, it is not a space filled with individuals. It is a space filled with [the] structures of social life. It is a space filled with institutions” (p. 17). From the family and community to Congress and campus, we need to rebuild our institutions to put our society back on track. We need to rebuild these “durable forms of our common life,” these “frameworks and structures of what we do together” (p. 19).

Americans have always been great institution builders. But lately we’ve become institution wreckers and because of this we are losing trust in our institutions. Levin points to Gallup surveys. In the early 1970s, 80 percent of Americans told Gallup that they had “a great deal” or “quite a lot” of confidence in doctors and hospitals. In 2018, the figure was 36 percent. Meanwhile confidence in organized religion fell from 65 percent to 38 percent, confidence in public schools dropped from 60 percent to just 29 percent, and confidence in Congress shrank from 42 percent to an abysmal 11 percent. This pattern holds for nearly all the institutions Gallup asked about, although the military is an exception.

This loss of confidence in American institutions has been driven by many factors, but Levin argues convincingly that a fundamental force is the way that institutional insiders have transformed themselves. Partly due to the rise of new communications technologies they have gone from seeing institutions as “formative” to seeing them as “performative.” They have stopped focusing on their responsibilities to their institutions and responsibilities that arise from their institutional positions. They no longer ask “How shall I act here, given my position?” (p. 168, emphasis added). They are less likely to think, “I’m a parent now, so maybe I shouldn’t behave this way” or “Is this how a police officer or a pastor or a student” or a CEO or a senator or a journal editor or an employee or a neighbor should act here (p. 168)? Instead of thinking about how institutions—like marriage, parenthood, higher education, or professional status—can empower society by constraining our behavior and by forming and elevating us to be better people, increasingly people see institutions as platforms for their own advancement. There has always been a tension and balance between these two outlooks—“how can I be a better person who benefits others” and “what’s in it for me?!”—but the pendulum has swung too far to one side. As Levin sees it, too many institutional insiders now see themselves as outsiders with no responsibilities and see their institutions as stages on which they can promote themselves, rather than furthering the purposes of the institution.

Levin’s case studies of “institutions in transition” (including Congress, the presidency, the courts, the professions, higher education, social media, parenting, families, religion, and the civic sector) are insightful and often troubling. Journalism, he cogently argues, has been transformed from a profession with “an institutionalized commitment to a process of verification that aimed to distinguish fact from fiction ... a journalistic code of ethics, layers of something like peer review in the editorial process, and procedures for punishing, shaming, or ostracizing violators” (p. 81) to a means of self-expression with a culture of individual celebrity wracked with a “never-ending, loose, unstructured form of conversational commentary on television, on Twitter, and elsewhere—a conversation carried on in public view but outside the procedural and ethical boundaries of their workplaces, which makes it increasingly difficult for journalism to lay claim to institutional integrity and nearly impossible for journalists to avoid petty partisanship” (p. 85 – 86).

With platforms, many institutional insiders have become performers and entertainers. Formality, with its signals of seriousness and integrity, has given way to entertainment in so many spheres and it has become hard to tell which things are real and which are for show. Entertainment has spread beyond its rightful boundaries. Politics has become entertainment, as Levin points out. But entertainment has also wormed its way into education, sex, and even religion. A priest brings a beach ball to the school mass to entertain children heading off to summer vacation (“don’t tell the bishop I did this!”), showing an utter lack of seriousness—rather than leading a solemn procession. Televisions and other screens are everywhere—at the doctor’s office, at the auto repair shop, in restaurants, at the blood donation center, and even in public restrooms—because these toys are now inexpensive and it is assumed that we always want to be entertained.

Levin’s book is meant in part to be a DIY guide and the first implicit piece of advice is to forego entertainment. But this is getting harder and harder to do, as he points out in a superb chapter on “The Informality Machine”—social media. Social media is corrosive. A 2020 study by Hunt Allcott, Luca Braghieri, Sarah Eichmeyer, and Matthew Gentzkow (“The Welfare Effects of Social Media,” American Economic Review, 110, no. 3: 629-76) using a randomized experiment, found that deactivating Facebook for the four weeks before the 2018 U.S. midterm election led to increases in offline activities such as socializing with family and friends, reduced political polarization, and increased subjective well-being. Social media encourages us to live performatively, as Levin sees it. In the selfie culture, we act as our own paparazzi and want to be celebrities. (Have we noticed that many (most?) celebrities live deeply wounded lives?) “There is no denying that the social media platforms have undercut our social lives. They plainly encourage the vices most dangerous to a free society. They drive us to speak without listening, to approach others confrontationally rather than graciously, to spread conspiracies and rumors, to dismiss and ignore what we would rather not hear, to make the private public, to oversimplify a complex world, to react to one another much too quickly and curtly. They eat away at our capacity for patient toleration, our decorum, our forbearance, our restraint. They leave us open to manipulation” (p. 135). It seems that it is time for us to deplatform ourselves.

Levin closes by asking us to take a break from the destructive game of seeing the world as a conflict between oppressors vs. the oppressed. “Many Americans are not lucky enough to have the benefit of a flourishing family, or the opportunity for rewarding work, or an uplifting education, or a thriving community, or a humbling faith, let alone all these at once. But some combination of these soul-forming institutions is within the reach of most, and the work of reinforcing them, sustaining the space for them, and putting them in the reach of as many of our fellow citizens as possible is among our highest and most pressing civic callings. All of these institutions now need us, and we can help by taking them seriously” (p. 201)—especially by taking Levin’s most important advice to heart and always asking ourselves “How shall I act here, given my position?”