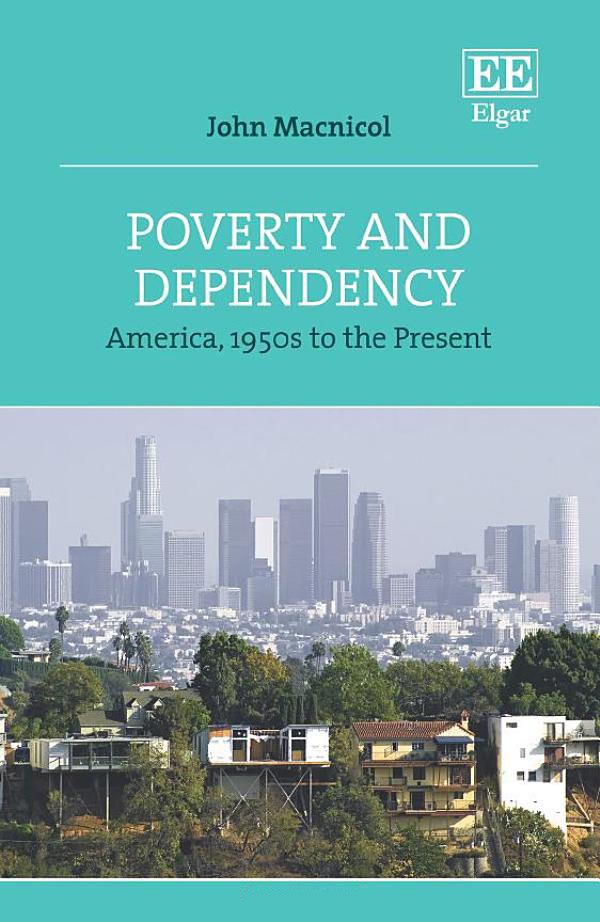 Poverty and Dependency
America, 1950s to the Present
By John Macnicol
Hardcover
This book review is a web exclusive for the Summer 2021 issue of The Independent Review.

John Macnicol’s Poverty and Dependency: America, 1950s to the Present is a slender volume that traces a history of poverty, welfare, and debates about “the underclass” in post-World War II America. Macnicol has a relatively robust faith in government and often sees economic analysis as mere opinion. For those well-acquainted with these topics, his effort doesn’t offer much. For those less familiar, the book is a modest (and biased) introduction to the questions at hand.

Even though it’s not included in the book’s title, the concept of “the underclass” plays a key role in Macnicol’s book. The term was initially coined by the Left. (He briefly describes the work of Gunnar Myrdal, William Julius Wilson, Ken Auletta, Douglas Glasgow and Michael Harrington.) But the Right embraced the term too. (Here, he touches on Martin Anderson, George Gilder, Lawrence Mead, Daniel Patrick Moynihan, Irving Kristol, Charles Murray, and “the rise of conservative think tanks.”)

The underclass is determined by some combination of genetics and environment, individual choice and exogenous influences. Beyond mere poverty, the underclass is also defined in geographical terms (requiring a concentration of poor people to qualify) and often in generational terms (with a familial impact on those who have been “left behind”).

Macnicol argues that conservatives focus on “human agency” (p. 56) and “the failings of individuals” (p. 3), rather than institutional explanations. Although they place more weight on “human agency” and “personal responsibility,” the Right also blames institutions—most notably, the government and elites for “changing the rules of the game” for the poor and “corrupting” individuals through welfare policies.
The Left emphasizes the macroeconomy—the ability of economic growth to lift all boats, but also troubles for the marginal when an economy (or a sector) struggles. Globalization gets some blame as well—as it “began to destroy the vast, protected” domestic markets (p. 10). (Macnicol overlooks the Left’s angst about impersonal government bureaucracies that can dehumanize the poor.) In any case, both sides have their institutional bugaboos; both see a significant role for outside factors, even if the catalysts differ. And ultimately, he acknowledges that these matters are complex and exceedingly difficult to measure.

The book is sprinkled with odd economic interpretations. Macnicol somehow links OPEC’s success in the 1970s to increased globalization and argues that less competition had “sustained the US economy for decades” (p. 10). Later, he complains about a supposed increase in monopoly power within the economy. He confuses deflation and disinflation. He imagines that high inflation is only an issue in neoclassical economics and that moderate inflation is “actually beneficial” for society (p. 50). He denigrates the Laffer Curve and mostly dismisses Thomas Sowell by saying he “offered some interesting arguments” (p. 73).

In addition to this hodgepodge—and central to the topic of the book—Macnicol sees concerns about welfare’s work disincentives as simply a matter of conservative ideology. He is perturbed that Social Security is not mentioned in the same breath as welfare programs. But he doesn’t seem to understand that incentive problems are not nearly as relevant for the retired—and that Social Security is a system that workers have paid into for decades with a paltry expected rate of return.

There are sins of omission as well. Macnicol seems unaware of the flaws in the official poverty rate—that the government’s primary statistical proxy is mostly a measure of dependence on government. And he focuses on Aid to Families with Dependent Children (AFDC) as if it is the only means-based program for the poor. While AFDC has received a disproportionate share of attention, a thorough discussion would acknowledge the role of all welfare programs.

For conservatives, Macnicol describes political motives that are narrower and more mean-spirited than is charitable or generally accurate. He describes criticisms of welfare as a primary driver within political views and a top tool in political strategy. He downplays the Left’s over-promising on the efficacy of the War on Poverty. He notes that Richard Nixon increased War on Poverty spending the most, but neither credits conservatives nor describes him ideologically. And he ignores the many other reasons why people might be “conservative”—including, amazingly, the issue of abortion. In a word, he seems to imagine that the entire conservative political world revolved around welfare.

The largest section of the book is devoted to critiquing Charles Murray, particularly his work in Losing Ground. Macnicol spends more than a quarter of the book on Murray—a handful of mentions throughout and then all of chapter 5. He provides a useful biography of Murray and empathizes with his distrust of elite effectiveness after his experiences in Thailand. But he confuses Murray’s “wistful longing” for the 1950s with his admiration for the effectiveness of Edmund Burke’s “little platoons” in that era.

Macnicol would have avoided this error if he knew about Murray’s excellent and objective policy book, In Pursuit of Happiness and Good Government. (Macnicol says that Murray’s best and least political work is an obscure book based on his Ph.D. thesis.) Macnicol also erects a strawman by criticizing Murray’s lament about the explosion of single-parent households, describing them as “inevitably bad” (p. 107). Instead, Murray is quite clear: there are many exceptions, but single-parenthood is certainly correlated with all sorts of unfortunate outcomes.

Macnicol gives brief attention to Murray’s famous 1993 Wall Street Journal article on welfare and the marked increase in single-parent households among whites—which he then connects to a passing mention of Murray’s Coming Apart. Since Macnicol is most interested in Murray’s influence on the 1980s welfare debate and the 1996 welfare reform, this is a regrettable but understandable omission. Coming Apart is must-reading on this topic, but it is outside Macnicol’s focus.

Macnicol’s book follows his training and ideology. He knows enough history to be helpful. He knows enough economics to be dangerous. And his political priors lead him to judge Charles Murray and conservatives too harshly, while giving too much of a pass to welfare programs and their well-intentioned proponents.