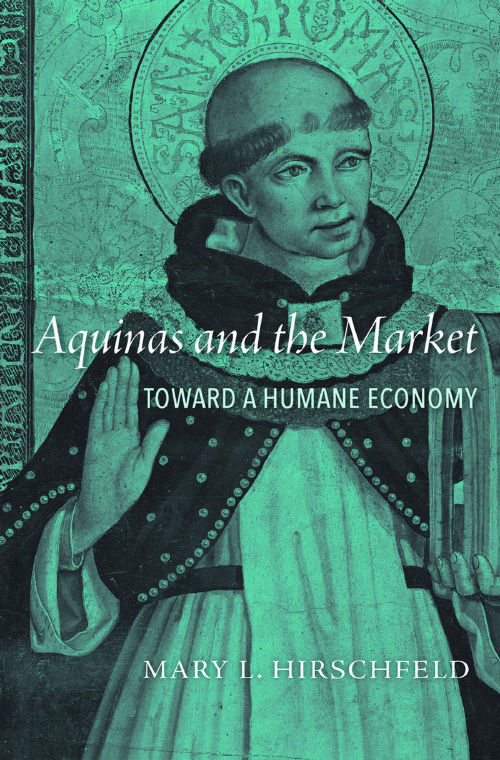 Aquinas and the Market
Toward a Humane Economy
By Mary L. Hirschfeld
Kindle Hardcover
This book review is a web exclusive for the Summer 2021 issue of The Independent Review.

A few years ago, while enjoying lunch with colleagues, the conversation turned to the nature of marriage. A young unmarried visiting professor asked “What is marriage anyway?” And answered that it’s basically just a contract between partners, essentially no different than any other contractual relationship between maximizing individuals. A married colleague and I shook our heads in dismay. Telling him, that if that’s how you view marriage, don’t expect your marriage to flourish and last. Perhaps it’s inevitable that economists will push their usual way of thinking about maximization into every realm of life, but—as Mary Hirschfeld argues—we often do so to our own detriment and to the detriment of others, and not just when it comes to things like marriage. If we view life as merely an exercise in constrained maximization, we will not flourish and we will not last.

Hirschfeld has a unique perspective. She earned a Ph.D. in economics from Harvard University, achieved tenure at an excellent liberal arts college, and then earned a Ph.D. in moral theology before restarting her academic career. Observing economics from the inside, she appreciates both its strengths and its shortcomings. It is a powerful tool for understanding the world, for inquiring into—as Adam Smith put it—“the nature and causes of the wealth of nations.” But, as Hirschfeld convincingly argues, it cannot stand on its own. In particular, one of its core assumptions—“more is better”—needs to be reexamined. Can we meaningfully explain why more consumption and wealth is a good thing?

Economists focus on how to create wealth, but we dodge the deeper question. What is material wealth for, after all? Hirschfeld argues that to answer this question economics needs theology. It needs to learn from theology. It needs to let theology set the agenda, because questions like “what is wealth for” can only be answered as part of the broader question of what is life for.

To help answer this question, she turns to Thomas Aquinas (1225–1274)—who is widely considered to be one of the most important theologians in history. When economists begin with the “more is better” assumption, they effectively define people as insatiable. Aquinas counters that our desire for the finite goods of this world must properly be finite. Material goods can be good, but they are purely instrumental—not ends in themselves. The end is happiness, which comes from cultivating a life of virtue, not from consuming and possessing wealth. Aquinas warns us that unbounded desire for material goods is disordered. Such insatiability would not be much different than nymphomania or alcoholism. Mankind isn’t depraved, so we needn’t be insatiable. However, we are fallen, so we need to train our passions. Economists reflexively accept people’s preferences as a given and conclude that the best outcomes are reached when people seek to maximize given these preferences and the constraints they face. Aquinas objects that these untutored preferences need to educated and cultivated so that we can achieve the greatness for which we were designed.

First, we must fulfill our needs. Aquinas distinguishes between two types of necessity—our physical needs and our social needs. We obviously need food, clothing and housing to live, but we also need sufficient material goods to lead lives appropriate for our social situation. As Hirschfeld puts it, “I could get by with a tattered old T-shirt, but it would not be becoming for me to pay a call on my neighbors” (or I might add, teach a class or attend a business meeting) “so attired” (p. 121). However, if “we have sufficient wealth to meet those ends, further increases in income are superfluous. It thus would be irrational to seek ever-rising incomes. And it would also be irrational not to give away any excess income” (p. 123). Why? Because we are called to excellence, to perfection, to artistry. And perfection is not achieved by having more than we need. Having more than we need doesn’t make us better people. Perfection is not accumulation. As Hirschfeld insightfully puts it, “the prudent person is less an applied mathematician than an artist working to arrange the distinctive goods in her life into a harmony that brings out an underlying unity of vision. ... Perfection is different from maximization” (p. 116). “The painter does not improve his painting by adding more paint. The poet does not improve her poem by adding more words” (p. 117). Accordingly, “while it seems clear that economic growth is a real blessing for those mired in poverty, it is less obvious that economic growth helps those who already have the means to meet immediate material needs” (p. xi). We should be embarrassed that we feel economically hard-pressed when we have all our needs filled and enjoy the highest material standard of living in the history of the world.

What is to be done? Hirschfeld’s ideas will strike many as radical, but not in the usual sense. Modern radicals say that the rich are hogging too many resources, so the surplus of rich Americans must be seized and given to its poor. But if Hirschfeld’s arguments are correct, this would be taking from those who have too much and giving to those who already have enough. Instead, Hirschfeld argues that a “substantial proportion of economic activity fails to secure real human goods” (p. 155) because we so often fail to distinguish what is genuinely good—and end up producing and consuming things that are bad. Her radical idea is to go back to the tradition of distinguishing between economic goods and services versus economic bads and disservices. But we seem to be afraid to have this debate. Maybe this is because we’re afraid of offending other people? Or because we’re afraid of what others will say to us? Perhaps we think the discussion will generate a lot of heat but not much light. Is “live and let live” the only safe choice? Or, perhaps, we’re afraid of what we’ll end up saying to ourselves? If we are afraid to have this collective conservation, do we at least have enough courage for the interior conversation?

As it is, we economists observe that people’s desires are insatiable and seem to say “keep going!”—keep trying to get more even though this will never really satisfy you. Theologians like Aquinas observe the same and say “go somewhere else”—more here on earth will never satisfy, so plan for eternity instead.