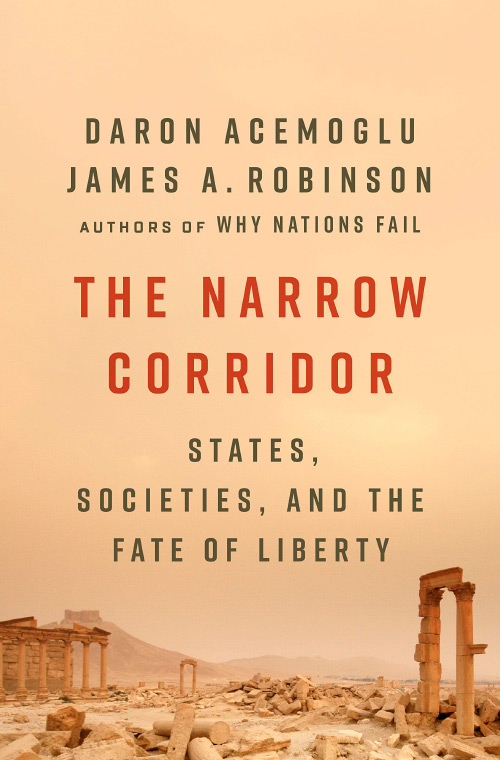 The Narrow Corridor
States, Societies, and the Fate of Liberty
By Daren Acemoglu and James A. Robinson
Kindle Hardcover Paperback Audiobook
This book review appeared in the Summer 2021 issue of The Independent Review.

Amid heightened economic, social, and political divides, social unrest, and rising popularity of antiliberty arguments, Daren Acemoglu and James A. Robinson write a book that unapologetically emphasizes the importance of liberty. Liberty not only creates prosperity but also is the foundation that provides individuals with what they want—the opportunity to create and live the lives they want to live. Good old-fashioned liberty. The kind of liberty discussed by John Locke, where individuals can act, buy, sell, think, and speak without having to ask for permission as long as these actions do not directly harm others. People must be free from violence, intimidation, punishment, and social sanctions in order to make free choices about their lives.

Yet this kind of freedom is rarely observed across the world or throughout history. Acemoglu and Robinson ask why. Like many moral philosophers, political economists, and political scientists before them, this book addresses the age-old question “Why is liberty so hard to achieve and sustain?” To address this daunting political economy question, a crash course on the history of human societies is provided, focusing on when liberty has taken hold and where it failed to do so. The authors’ key ingredient to making liberty last is the state. Liberty needs the state. But there’s a huge catch. The state must be controlled. We must shackle Leviathan. And there’s the problem.

Throughout history, individuals have not been very good at constraining Leviathan, which leads to a conundrum. People want liberty but need the state to provide necessary protections so that private citizens do not infringe on each other’s rights. However, once the state is granted power, the main infringement on liberty is the state. Therefore, the authors title their book The Narrow Corridor because the pathway that avoids tyranny by the state or tyranny by statelessness is narrow indeed.

The book presents a framework to assess alternative forms of governance with the overall goal to attain and keep a free society. To summarize, societies are classified as (1) absent Leviathan, (2) despotic Leviathan, or (3) shackled Leviathan. Under the first scenario, statelessness, life is either “nasty, brutish and short” or peaceful but relies solely on norms to govern that can stifle liberty. With a despotic Leviathan, peace and economic growth are possible, but they usually create an unequal society where liberty and prosperity are shared by only an elite few. Shackled Leviathan creates a path for liberty with a state not only providing necessary protections and safeguards but also including social safety nets and providing public goods.

To get the benefits of liberty and freedom, we need option three, shackled Leviathan. But, first, certain norms and institutions must exist before state building ensues; otherwise, we end up with despotic Leviathan. These preconditions are bottom-up, participatory institutions and egalitarian norms grounded in liberty that usually exist first under statelessness, such as those norms that existed in Germanic tribes or Italian city-states. A government can make this type of stateless society better off by codifying liberty-grounded norms, breaking illiberal norms, and centralizing law making and bureaucratic enforcement, as was done under the Roman Empire. This unique balance of power between state and society is the narrow corridor where a powerful state and liberty coexist. Here, state capacity and individual liberties increase, creating a prosperous and flourishing society, such as ancient Greece or the United States.

Anyone who is interested in economics, philosophy, politics, history, liberty, and wealth creation should read this book. The authors do a fantastic job of outlining a framework to compare alternative means of governing and using historical case studies to provide the evidence for their arguments. Scholars and policy makers too often treat a society like a blank canvas that can be reconstructed, ignoring the historical determinants that shape present-day culture, traditions, economic incentives, and the political structure (for a similar critique, see William Easterly, The Tyranny of Experts: Economists, Dictators, and the Forgotten Rights of the Poor [New York: Basic Books, 2014]). Acemoglu and Robinson avoid this trap by crafting a narrative that asserts historical inertia as a main explanatory factor of the tug-of-war between liberty and leviathan.

The work, however, isn’t without flaws and oversights. The authors walk us through myriad examples where some societies never enter the corridor, some move in and out, and a few maintain the balance between liberty and state power. If state power is too strong, a society moves toward despotism. If social norms are too powerful, a society shifts toward statelessness. It is unclear, however, exactly what drives this balance or what pulls a society in one direction versus another.

The authors miss an opportunity to deepen their theoretical contribution and help explain shifts toward despotism by ignoring insights from the public-choice literature. All politicians, including autocrats and those democratically elected, are driven by selfinterest. Political self-interest often does not align with granting and protecting individual liberty. Constraining Leviathan requires controlling special interests and rent seeking, limiting bureaucratic growth and overall growth of government, minimizing regulatory capture, and curtailing redistribution. Utilizing contributions from these bodies of works could provide deeper understanding on how to limit state power.

The framework assumes that once Leviathan is shackled, it gives people what they want—in this case liberty. Thus, the solution appears to be baked into the question with a circular argument. Society must want liberty and currently govern with norms that support individual rights, including property rights, and a spirit of innovation. But this society still needs a state to achieve even better economic and social outcomes. The state, however, must be constrained, or society runs the risk of despotism, which could be worse than statelessness. These necessary shackles that will avoid state tyranny are generated from the norms that governed during statelessness. So why do we need a state? Weighing the marginal costs and benefits of statelessness versus Leviathan would have been a welcome addition to the framework and historical analysis.

The shackled Leviathan theory heavily relies on a cultural explanation, which begs the question: Why not consider another option under absent Leviathan? That the peaceful, liberty-loving norms necessary to create shackled Leviathan may in fact be capable of creating a society not considered by Acemoglu and Robinson. Statelessness can generate a prosperous society where norms aren’t stifling and life isn’t in a constant state of warfare. This version of statelessness is not considered. Statelessness is too easily equated to lawlessness, which isn’t a fair representation of stateless societies as described in the anarchy literature that has emerged over the past several decades, as reviewed by Benjamin Powell and Edward P. Stringham (“Public Choice and the Economic Analysis of Anarchy: A Survey,” Public Choice 140 [2009]: 503–38).

Governance mechanisms in stateless societies can be viewed as being effective and efficient given the context in which they are operating and compared to the feasible alternatives available (see, for instance, Peter T. Leeson, Anarchy Unbound: Why Self-Governance Works Better Than You Think [Cambridge: Cambridge University Press, 2014]). It is easy to criticize stateless societies when the benchmark is a truly shackled Leviathan; however, by Acemoglu and Robison’s own account, the latter form of government is so rare that perhaps it shouldn’t be our point of comparison. Anarchy can be a second-best solution and should be discussed more seriously, as Peter T. Leeson and Claudia R. Williamson argue (“Anarchy and Development: An Application of the Theory of Second Best,” Law and Development Review 2, no. 1 [2009]: 77–96).

Similarly, historical and present-day societies that experience hellish conditions from living under dictatorships could be better off without such a tyrannical state. If such societies were to become stateless, they might achieve more liberties and freedoms, a possibility that Acemoglu and Robinson too easily dismiss because of their fear of the cage of norms—a fear that is not sufficiently established.

By attempting to answer the political economy question, Acemoglu and Robinson’s work may have generated more questions than it answers. I anticipate that scholars across the social sciences will write many subsequent journal articles and books engaging in numerous interesting and important debates. For example, instead of looking to the state as the only source of sustainable liberty, a more fruitful research agenda is to examine alternative forms of governance that do not involve the state.