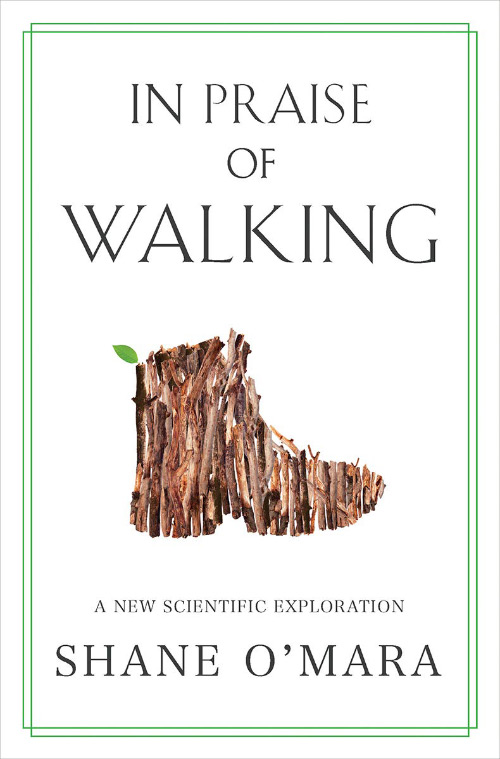 In Praise of Walking
A New Scientific Exploration
Shane O’Mara
Kindle Hardcover Audiobook Audio CD
This book review is a web exclusive for the Fall 2020 issue of The Independent Review.

Walking is “holistic—every aspect of it aids every aspect of one’s being,” argues Shane O’Mara, professor of experimental brain research at Trinity College Dublin (p. 3). His goal is to convince us “how imperative it is that we start walking again,” with the hope that readers respond and that physicians even begin to prescribe walking to their patients (p. 4). After all, Hippocrates claimed that “walking is the best medicine,” and O’Mara suggests that it is only a bit of an exaggeration to say that “sitting is the new smoking” (p. 124). Common sense tells us that walking will improve our muscles and circulatory system (especially the heart), but there are also documented benefits to the skeleton, digestion, internal organs, and especially the brain. For example, walking not only brings more blood to your brain, but also promotes the production of vascular endothelial growth factor (VEGF), which helps to grow the network of blood vessels carrying oxygen and nutrients to the brain. As O’Mara sees it, walking has been a key to our species’ success—traveling upright allows humans to cover the same distance with only half the calories in comparison to chimps, for example—and to our spread across the globe.

All of this is useful information, but why review In Praise of Walking in a journal dedicated to political economy? Because, the benefits and costs of walking have implications for laws and public policies. Unfortunately, like almost any aficionado, O’Mara tends to forget about costs. In the economic way of thinking, any activity is optimally pursued up to the point where the (declining) marginal benefit equals the (rising) marginal cost. O’Mara’s central point is that the marginal benefits of walking are far higher than most people would imagine. He addresses the evolutionary changes throughout the body that we needed to put us on our feet (an “astounding neuro-musculo-skeletal achievement”); the mechanics of walking; the brain functions involved in walking (including our internal “GPS” system); the social aspects of walking; how walking can spur creativity and improve our mood; and the sheer joy he and others have experienced in walking (p. 62). He celebrates walking, and as an avid walker I now have even more reasons to do the same.

However, in advocating that we invest in making our cities more walkable, he fails to consider the significant costs. He lauds walkable cities like New York and San Francisco, but omits any mention of the fact that dense cities like this have a very high cost of living. High rents, no yard, and no kids won’t appeal to a lot of people. The suburbs and urban sprawl have a purpose. One size does not fit all. Ultimately, however, the cost of walking has little to do with infrastructure, population density, or (perhaps) even the weather. The primary cost of walking is its opportunity cost—what one must give up when one walks. With the spread of electronic devices, the opportunity cost of walking has fallen—unless you enjoy looking at the device’s screen or typing on it rather than merely listening to it or talking into it. The opportunity cost of walking doesn’t differ much between cities, suburbs, and rural areas, so O’Mara’s plug for urban living and suggestions that we redesign our cities won’t convince everyone. On the other hand, his proposal that health care providers use text alerts or social media groups to create regular walking groups for the elderly sounds plausibly cost-effective.

The least satisfying section of the book—its consideration of walking and creativity—is related to this failure to consider the costs of walking. In comparison to the rest of the book, this discussion is generally anecdotal—largely because measuring meaningful creativity is difficult and it’s not clear that “creativity” per se is always a good thing. O’Mara quotes Friedrich Nietzsche, saying “only thoughts reached by walking have value” (p. 145), and Jean-Jacques Rousseau, asserting that “I can only meditate when I am walking. When I stop, I cease to think” (p. 7). As these two thinkers had some of the most poisonous ideas in modern history, one may rightly be wary of the costs of walking. However, as readers of The Independent Review are unlikely to follow the path of Nietzsche and Rousseau, they could do worse than take O’Mara’s advice to heart, brain, skeleton, and digestive system and consider the immense benefits of walking.