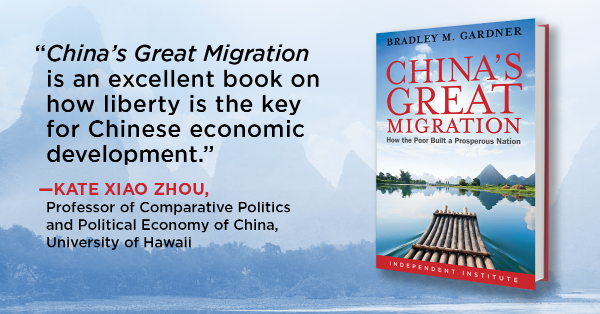 President Trump pledged to grow the U.S. economy by 4 percent annually—a rate not reached since the Clinton years. China, in contrast, hasn’t seen annual GDP growth under 4 percent since 1990. Its economic surge is even more impressive when couched in human terms: since the early 1980s, it has lifted almost 800 million Chinese people out of poverty. Development “experts” have searched high and low for a thorough explanation for this phenomenon, but Independent Institute Research Fellow Bradley M. Gardner provides the puzzle’s missing pieces in his new book, China’s Great Migration: How the Poor Built a Prosperous Nation.

Gardner traces the roots of China’s economic miracle to the greatest migration in human history: the exodus of more than 260 million people from the Chinese countryside to the city. Urbanization in turn forced government officials to enact wide-ranging reforms—tax reform, social services reform, land reform, and infrastructure development—that accommodated and amplified the economic growth. For all of the talk about China’s market-oriented policy changes, it was the people, not the policymakers and bureaucrats, who led China’s world-historic transformation. A former journalist and research analyst who spent years working in China, Gardner provides a first-hand account of the initiative and work ethic of China’s new urban workforce.

None of this is to say that China’s economic growth will necessarily continue, however. Indeed, Gardner notes that it will likely grind to a halt soon after the urban influx levels out in the mid-2020s—unless major changes are made to the nation’s capital-hogging state enterprises, inefficient state-owned financial sector, and sprawling unchecked one-party state. China’s Great Migration concludes by offering lessons not only for China’s policymakers, but also for people elsewhere in search of a transformational growth strategy. Among other recommendations, these include enacting policies that make it easy for landowners to sell or lease rural property so that potential urban migrants won’t face legal restrictions that would discourage them from seeking more productive, higher-paying jobs. With its original analysis, first-hand reporting, and lessons for policymakers, China’s Great Migration offers unprecedented insights about an unprecedented economic achievement.

2) Trump and the Emoluments Clause

America’s Founders were leery of foreign interference. Indeed, the cause of Independence was motivated by the realization that the Crown’s rule of the thirteen colonies had become, in essence, (over)rule by a foreign power. Hence the call for revolution, not reconciliation. It is with this in mind, as well as various indiscretions such as King Charles II’s receiving a pension paid by King Louis XIV, that the Constitution’s authors expressly prohibited federal officials from accepting “any present, Emolument, Office, or Title, of any kind whatever, from any King, Prince or foreign State.” Is President Trump—by virtue of the ordinary goings-on at the Trump Organization (including any collection of rents and sales receipts from non-U.S. government tenants and customers)—in violation of the Emoluments clause? Writing in National Review, Independent Institute Research Fellow William J. Watkins Jr., argues that it’s hardly the legal slam-dunk that many believe.

The Supreme Court over the years has heard precious few cases involving the forbidden gift. In Hoyt v. United States (1850), however, it gave a definition that helps clarify. A prohibited Emolument, the Court decided, is any “compensation or pecuniary profit derived from a discharge of the duties of the office.” This suggests, according to Watkins, that the multiple Emoluments lawsuits against Trump won’t fly.

Moreover, early presidential actions further argue against Trump’s alleged Emoluments violations, at least not with any evidence presented so far. “Presidents Washington, Jefferson, Madison, and Monroe all owned massive plantations and sold agricultural commodities in Europe,” Watkins writes. “Undoubtedly, some of their customers were foreign governments, but no political opponent ever raised the specter that they were violating the foreign-emoluments clause.” If the administration of justice is supposed to be evidence-based, it appears that Trump’s Emoluments partisans must go back to the drawing board.

3) Trump’s Infrastructure Plan: The Road Not (Yet?) Taken

America’s crumbling highways, bridges, and ports need an estimated $4.5 trillion worth of upgrades to improve safety, shorten delays, and accommodate innovation, according to the American Society of Civil Engineers. In terms of policy, the Trump administration’s recently unveiled infrastructure plan—which encourages private investment and reduces the risk to taxpayers—is a big step in the right direction. In terms of politics, however, it’s looking like “an infrastructure plan to nowhere,” Independent Institute Research Fellow Samuel R. Staley writes in The Hill.

“President Trump will need to recognize the value of working with critics, rather than fighting against them, to make his plan a reality and to put a meaningful dent in the nation’s infrastructure deficit,” Staley continues.

Politically negotiated changes at the margin could yield big dividends for Americans, according to Staley. Because Republicans and Democrats agree on the need for infrastructure upgrades, bringing them together would hardly require the ham-fisted approach currently favored by the administration. One bright spot, its proposal to privatize air-traffic control, “enjoys bipartisan support,” Staley writes. Thus, engaging with members of Congress, on both sides of the aisle, to enact other market-based infrastructure policies could deliver significant benefits with little risk of political capital.

Street Smart: Competition, Entrepreneurship, and the Future of Roads, edited by Gabriel Roth

Politicians are seldom known for possessing iron-clad consistency. President Trump is not unique in this regard. His proposal to increase defense spending—by 10 percent—is difficult to square with his call for U.S. allies to provide more for their own defense. It also raises questions about his commitment to avoid elective wars. In a recent piece for the Huffington Post, Independent Institute Senior Fellow Ivan Eland urges the president to uphold his original foreign-policy promises and to thereby find savings in the defense budget.

During the 2016 campaign season, Donald J. Trump fumbled badly when asked to explain the nuclear triad. Now in the Oval Office, he’s called for upgrading U.S. nuclear-weapons capability. Here the president would do well to borrow a page from China’s nuclear playbook. All during the Cold War and beyond, as Eland notes, it seems that Beijing’s leadership focused on developing only a minimal long-range nuclear deterrent.

The United States could follow a similar strategy without compromise of its security, according to Eland. By pairing back America’s land-based intercontinental ballistic missiles and scrapping its nuclear-capable bomber force, the United States could afford to upgrade its nuclear-armed submarine fleet and still have change to spare. “Despite President Trump’s rhetoric, over time, he will not be able to afford unneeded defense profligacy, especially in nuclear weapons,” Eland writes.