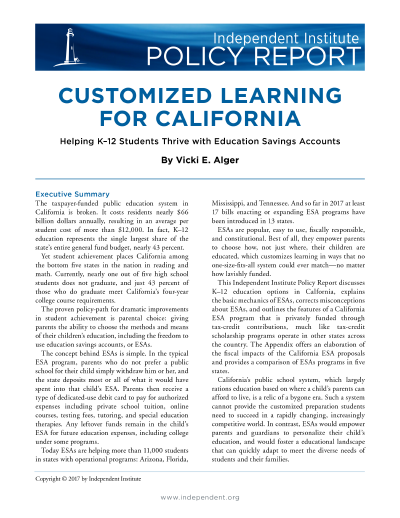 Yet student achievement places California among the bottom five states in the nation in reading and math. Currently, nearly one out of five high school students does not graduate, and just 43 percent of those who do graduate meet California’s four-year college course requirements.

The proven policy-path for dramatic improvements in student achievement is parental choice: giving parents the ability to choose the methods and means of their children’s education, including the freedom to use education savings accounts, or ESAs.

The concept behind ESAs is simple. In the typical ESA program, parents who do not prefer a public school for their child simply withdraw him or her, and the state deposits most or all of what it would have spent into that child’s ESA. Parents then receive a type of dedicated-use debit card to pay for authorized expenses including private school tuition, online courses, testing fees, tutoring, and special education therapies. Any leftover funds remain in the child’s ESA for future education expenses, including college under some programs.

Today ESAs are helping more than 11,000 students in states with operational programs: Arizona, Florida, Mississippi, and Tennessee. And so far in 2017 at least 17 bills enacting or expanding ESA programs have been introduced in 13 states.

ESAs are popular, easy to use, fiscally responsible, and constitutional. Best of all, they empower parents to choose how, not just where, their children are educated, which customizes learning in ways that no one-size-fits-all system could ever match—no matter how lavishly funded.

This Independent Institute Policy Report discusses K–12 education options in Calfornia, explains the basic mechanics of ESAs, corrects misconceptions about ESAs, and outlines the features of a California ESA program that is privately funded through tax-credit contributions, much like tax-credit scholarship programs operate in other states across the country. The Appendix offers an elaboration of the fiscal impacts of the California ESA proposals and provides a comparison of ESAs programs in five states.

California’s public school system, which largely rations education based on where a child’s parents can afford to live, is a relic of a bygone era. Such a system cannot provide the customized preparation students need to succeed in a rapidly changing, increasingly competitive world. In contrast, ESAs would empower parents and guardians to personalize their child’s education, and would foster an educational landscape that can quickly adapt to meet the diverse needs of students and their families.