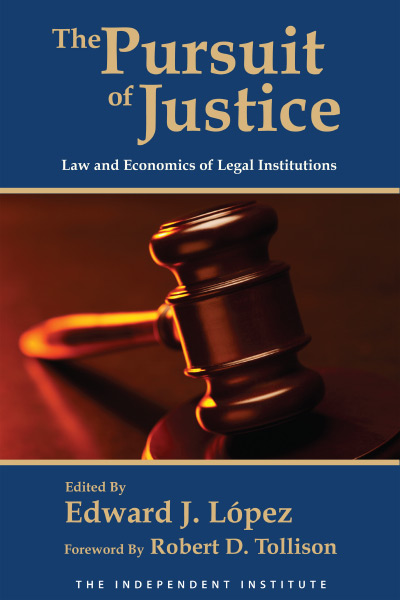 Judges, lawyers, juries, police, forensic experts, and others who work in the legal system respond to incentives. As in business and politics, incentives shape the outcomes of the legal system: they can either support the pursuit of justice—or they can undermine it, leading to wrongful convictions, frivolous lawsuits, higher attorney fees, restricted access to the courts, political interference, and government corruption. To improve our legal system significantly we must therefore first seek to understand precisely how our institutions structure the incentives that decision-makers face.

The Pursuit of Justice: Law and Economics of Legal Institutions, edited by Edward L. López, does exactly that. It shows why faulty incentives lie at the heart of numerous failures of the U.S. legal system. Rather than the romanticized version of the law as portrayed in television dramas and in much academic research, it portrays the legal system as it actually performs in practice. This realism, in turn, provides the basis for reform proposals in a host of areas—from fingerprinting to criminal sentencing, from lawyer licensing to judicial selection, and from eminent domain to wealth transfers via class-action lawsuits.

“The Pursuit of Justice is a realistic yet hopeful study of legal institutions, which as a whole provides a rigorous analysis of an array of topics and argues for reform of currently socially wasteful aspects of the law,” López writes in the book’s introductory chapter.

The book’s strength comes in part from the inspiration and analytical toolkit provided by public choice theory, traditionally the economic study of politics, as Robert D. Tollison explains in his foreword to the book. “As the original generation of public choice and law and economics scholars fade into the history of economic thought, a new generation steps up to carry on, defend, and extend the hard-earned intellectual gains,” writes Tollison. “That is why reading The Pursuit of Justice is such a refreshing intellectual experience.”

With chapters written by economists and law professors, The Pursuit of Justice offers a wealth of cross-disciplinary insights to help us understand—and improve—the performance of the U.S. legal system. The book covers five broad topics: the capture of the law by private interests, judicial selection methods, forensic science administration, eminent domain, and the law as a means of wealth redistribution.

Private Interests and the Law

Too often the law is driven to serve particular narrow interests instead of the public interest. This is hardly a new trend, as the history of Anglo-American legal institutions demonstrates. For example, in their chapter “The Rise of Law Enforcement in England,” Nicholas A. Curott and Edward P. Stringham show that the fiscal demands of kings in medieval England played a leading role in the gradual centralization of the legal institutions of that era.

Lawyers and judges have also been the intended beneficiaries of changes to the legal system. In “The Lawyer-Judge Hypothesis,” Benjamin H. Barton examines a series of twentieth-century court rulings that tilted laws governing the legal profession in their favor.

Similarly, in his chapter “Licensing Lawyers: Failure in the Provision of Legal Services,” Adam B. Summers shows how the regulation of the supply of legal services has protected lawyers from competition but has harmed consumers by raising attorney fees and limiting access to legal services.

Judges respond to incentives, and no body of evidence demonstrates this point better than studies of judicial selection methods. In “Electoral Pressures and the Legal System: Friends or Foes?,” Russell S. Sobel, Matt E. Ryan, and Joshua C. Hall show that experts perceive the quality of the legal system to be lower in U.S. states that elect their judges than in states where governors appoint the judges. Quality is even lower—and government corruption is higher—in jurisdictions where judges are elected in partisan elections and subject to the political pressures of re-election, as Adriana S. Cordis shows in her chapter, “Judicial Checks on Corruption.”

Judicial selection also influences judges’ rulings on criminal cases. For their chapter “Effects of Judicial Selection on Criminal Sentencing,” Aleksandar Tomic and Jahn K. Hakes examined more than 70,000 cases tried in 54 large-population counties from 1990 to 1998. They find that elected judges have higher incarceration rates but issue shorter sentences than do appointed judges. One reason is that county voters enjoy the benefits of “tough on crime” locally, but they share overall costs of the corrections system in a statewide fiscal commons.

One reason for the large number of faulty convictions is that prevailing forensics procedures lack genuine independence among fingerprint experts, the police, and prosecutors. Koppl proposes correcting this problem by creating triplicate redundancy. Not only would this reform result in fewer innocents going to jail, but it would also pay for itself because extra testing costs less than incarceration.

State and local governments routinely use the takings power to enhance their tax bases and prop up inefficient but glitzy developments. Defenders of this trend argue that the just-compensation requirement is a sufficient deterrent to misuse, but critics argue that assessment disputes strongly favor governments’ heavier legal firepower. In his chapter, “On the Impossibility of ‘Just Compensation’ when Property Is Taken,” John Brätland goes further than most critics by arguing that the concept of “just compensation” is inconsistent with involuntary transfer.

Ilya Somin, in “Economic Development Takings as Government Failure,” shows the adverse consequences of relying on eminent domain to foster growth. The results have been especially disastrous in Poletown, Michigan, and Washington, D.C., where the takings power was used most expansively. Five years after the Supreme Court’s Kelo decision, the parcel of land taken by the city of New London, Connecticut, remains undeveloped. In 2009, a story emerged that the entire neighborhood smelled of raw sewage.

The Law as a Means to Redistribute Wealth

Critics bemoan the excessive litigation of the American tort system, and federal reforms have aimed to curb frivolous lawsuits. But the root cause is bad incentives in the tort system. Chasing “jackpot justice,” some lawyers and judges have worked on the margins of the law. Their expansion of the meaning of various legal doctrines has benefited their own professional interests, sometimes at the expense of other segments of society. For example, they have transformed the practice of cy pres (“as near as possible”) so that judges can direct awards from certain class-action lawsuits to the legal profession instead of only to traditional charities, as law professor Charles N. W. Keckler explains in “Cy Pres and Its Predators.”

Class actions have also been moved into previously uncharted areas like securities litigation. In “Class Action Rent Extraction: Theory and Evidence of Legal Extortion,” Jeffrey Haymond draws attention to the growing number of states that use settlements with corporate defendants to supplement general tax revenues. This explains a New York Times report that 95 percent of a sample of tobacco-settlement revenues had gone to fund public-works projects or tax relief, not the victims of cigarette smoke.

Buy The Pursuit of Justice