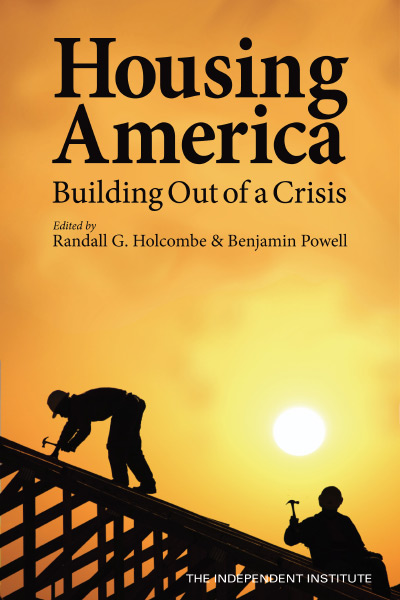 Nowhere in the American economy is the demand for government intervention stronger than in housing markets and land use. Housing policies and land-use planning are supposed to enhance human welfare, but how well do they live up to this promise? How exactly have they affected the quantity, quality, and affordability of housing? And what can be done to make housing markets work better?

Housing America not only critiques government policies that affect housing—including those behind the collapse of housing prices and the ensuing financial market turmoil that came to a head in 2008–2009—but it also shows how market mechanisms can address the problems that various government policies were created to correct.

Among the policies examined that affect housing directly are those that regulate land use. In the 1970s and 1980s, states began to establish statewide land-use goals and policies, with local governments doing the actual land-use planning to conform to state policies, methods, and goals. By the late 1990s, the so-called “smart-growth” movement favored the containment of urban sprawl, higher-density development, transportation alternatives to automobile travel, and the provision of affordable housing. Despite the appeal of these goals, Samuel Staley argues in his chapter that smart-growth policies have worked to increase housing prices by curbing the growth of new housing.

Zoning has been a fixture of the regulatory landscape in many cities since the early twentieth century. Almost all cities today have zoning laws, and few citizens would quarrel with their desirability. Who would want to have a cement plant or a warehouse built next to their house? Although zoning protects against these types of incompatible property uses, Bernard Siegan shows that zoning is not necessary to provide such protections: restrictive covenants do so—and more effectively. Land-use patterns in

Houston, the largest city in the United States without zoning, are indistinguishable from land-use patterns in cities that use zoning.

Building codes—arguably a type of land-use planning—are examined in William Tucker’s chapter. Although first established as a response to large-scale fires, building codes now also include regulations that have little to do with their original rationale. In addition, they change more slowly than innovations in construction and, because they also vary substantially from one locality to another, make it costly for builders to expand across multiple markets. Nevertheless, many in the construction industry have a vested interest in maintaining existing building codes, with which they know how to deal and which provide a barrier to entry for potential competitors.

Randal O’Toole’s chapter returns to the theme of the unintended consequences of smart growth. The transportation programs preferred by many smart-growth advocates, O’Toole shows, have worsened traffic congestion by emphasizing mass transit at the expense of roads. Policies designed to increase population density in congested areas further exacerbate the problem, leading to political pressures for government to act in ways that often prove to be counterproductive.

To help cope with escalating housing prices, more and more cities have required developers to include less-expensive housing as part of their developments. However, inclusionary zoning, as it’s often called, actually makes housing less affordable, as the chapter by Benjamin Powell and Edward Stringham explains. By imposing costs on developers, it reduces the supply of housing, thereby raising the prices. In addition, inclusionary zoning typically comes with strings attached to the affordable housing, making the houses less valuable to their owners—and it is never affordable to those most in need of inexpensive housing.

Rent controls are a local intervention intended to provide direct relief for high rental-housing costs. Matthew Brown’s chapter looks at the political incentives for and against rent controls. Rent controls can benefit current renters by reducing their rents, creating political support among renters. However, as Brown shows, they also reduce the supply of rental housing and thereby impose costs on future renters, who have no say in the political process.

Another instrument in the toolkit of local government planners is eminent domain, which is supposed to promote land-use efficiency by overcoming transaction-cost barriers to large-scale development. Compensation is supposed to offset the property owner’s losses, but Randall Holcombe’s chapter argues that the use of eminent domain fails to fully compensate property owners. Holcombe also shows how eminent domain leads to inefficient land-use patterns and is unnecessary to assemble large tracts of land for private developers.

Over the past fifty years, governments have increasingly charged developers a fee for negatively impacting existing residents who must share municipal services with new development residents. Jack Estill, Benjamin Powell, and Edward Stringham show how current residents use impact fees to impose costs on new development in order to build infrastructure that could be more efficiently privately provided.

Three chapters examine lesser-known aspects of federal intervention in housing finance and its relation to the rise and fall of housing prices. The first of these chapters, by Mark Thornton, looks at the role of Federal Reserve monetary policies in creating the housing bubble in the early twenty-first century. ornton helpfully explains why many economists have long believed that “loose” monetary policies foster the business cycle of boom and bust.

“Inflation of the money supply that accompanied the Fed’s cheap credit policy led to a borrowing and building binge of an unprecedented scale,” writes ornton. “The number of new homes built, the price of new and existing homes, and the total amount of real estate investment all indicate that the Fed’s policy, combined with a favorable tax policy and taxpayer-subsidized lending practices, creating the housing bubble.”

Lawrence J. White explains how two government-sponsored enterprises—the Federal National Mortgage Association and the Federal Home Loan Mortgage Corporation—have distorted patterns of homeownership, encouraging overconsumption of housing by wealthier people but doing less to assist poorer individuals. He recommends privatizing Fannie Mae and Freddie Mac to end the socialization of investment risk that government backing of these companies creates. Since the collapse of the housing bubble, foreclosures have increased, major mortgage banks like Countrywide and IndyMac have failed, and the government has bailed out Fannie Mae and Freddie Mac.

Although some aspects of the mortgage meltdown that began in 2007 have been well reported, other aspects have not. Stan Liebowitz examines one component too often overlooked: government interference in the mortgage market that encouraged the weakening of underwriting standards. He finds that the mortgage market collapse is a direct result of prior government policies that aimed to increase rates of homeownership, particularly among minorities and the less affluent.

Given that government policies often make housing problems worse, might the marketplace offer alternatives for better local decision- making and related services? Evidence is accumulating that private neighborhood associations—homeowners associations, condominiums, and cooperatives—often provide residents with more flexible and responsive governance. These benefits help explain why about 18 percent of the U.S. population—about 55 million people—live in 275,000 neighborhood associations today, compared to fewer than one percent in 1970.

Fred Foldvary explains how neighborhood associations can provide many of the functions that people associate with governments. Robert Nelson builds on this theme by showing how neighborhood associations have grown, and how they can be established not only with newly developed areas but also in existing ones. Together, Foldvary and Nelson, and the other contributors to Housing America offer hope that new possibilities will arise at a time when homeowners, renters, and developers are looking for ways to thrive in an uncertain economic climate. If only policymakers would listen.

Randall G. Holcombe is Research Fellow at the Independent Institute and DeVoe Moore Professor of Economics at Florida State University. He is author of twelve books and more than 100 articles published in academic and professional journals. His books include Writing Off Ideas: Taxation, Foundations, and Philanthropy in America, Public Policy and the Quality of Life, From Liberty to Democracy: The Transformation of American Government, and Entrepreneurship and Economic Progress.

Benjamin W. Powell is Research Fellow at the Independent Institute, Assistant Professor of Economics at Suffolk University, and a Senior Economist with the Beacon Hill Institute. He is author of more than two dozen scholarly articles and editor of the book, Making Poor Nations Rich: Entrepreneurship and the Process of Development.