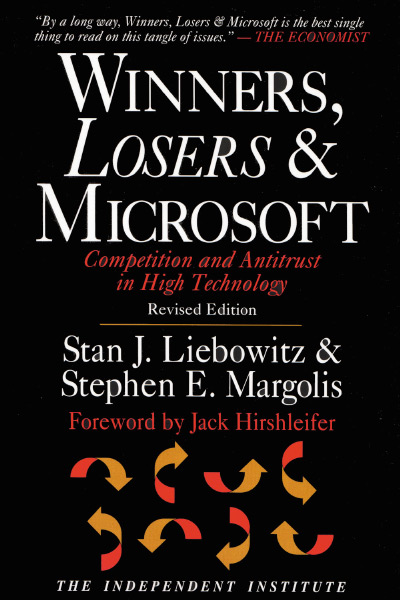 The “mousetrap principle”—build a better mousetrap, and the world will beat a path to your door—is one of the basic assumptions of our economy.

Recently, however, new theories that have percolated in academic writing and into public policy have questioned this principle. Some people believe a property known as “path dependence” can “lock-in” inferior products and “lock-out” innovative newcomers. Many feel that Microsoft is a prime example of a company triumphing through such “path dependence.”

In WINNERS, LOSERS & MICROSOFT: Competition and Antitrust in High Technology, Stanley Liebowitz and Stephen Margolis examine the theory and evidence of path dependence, and assess whether Microsoft and other highly successful high technology companies have made use of “lock-in.” Their conclusions are surprising. Instead of “lock-in,” they find that competitive advantages in high tech are short-lived and temporary. The best way to promote competition and innovation, they conclude, is not through antitrust action but instead by relying on the competitive entrepreneurship of free markets. The result is a book that is both a superb examination of the economics of information technology and a case study of how government policies solely based on abstract theories devoid of solid empirical evidence can produce great harm.

In a nutshell, lock-in supposedly happens when many other people use the same product (like a telephone or VCR) and it becomes a de facto standard. “Network” effects from this standard (such as more movies being available on VHS if VHS is the most widely used standard) mean consumers want products adhering to that standard. Consumers will be reluctant to try new products diverging from the standard.

This possibility is the problem that path dependence theory alleges. It is this exception to the mousetrap principle. The lock-in problem is said to explain the success of the everyday QWERTY typewriter keyboard, the VHS video tape format (over the supposedly superior Beta format), and Microsoft’ s operating system.

Gaps in the Logic of “Lock-In”

Leibowitz and Margolis show why true examples of harmful lock-in are very hard to find. Path dependence theories, the authors show, leave out important steps real people take to deal with real problems. Foresight, communication among consumers, consumer magazines, marketing efforts, moneyback guarantees and other entrepreneurial efforts all work to prevent lock-in. If we all really knew that a new product was sufficiently better, and we all knew that we all knew, wouldn’t someone find a way to help us switch? Liebowitz and Margolis argue it is extremely likely that someone would, especially since in doing so, there will be money to be made.

WINNERS, LOSERS & MICROSOFT looks at evidence from the real world. First, it considers a number of the cases alleged to demonstrate that lock-in occurs. The competition between Beta and VHS is examined, followed by the battle between the Macintosh and the IBM PC and several other rivalries. Liebowitz and Margolis show that in case after case, alleged lock-ins are not really lock-ins at all.

The authors then examine the market for personal computer software the focus of the decade’ s most infamous antitrust case and a key reason for the attention paid to path dependence theories. This industry has networks, an urge for compatibility, and ordinary economies of scale all of the preconditions of lock-in. Surely, if theories of networks, lock-in, or path dependence apply anywhere, they ought to apply here.

Applications software markets, the authors note, are often dominated by a single product. That finding, which should not surprise anyone, is consistent with network effects’ increasing returns. But the book also demonstrates two important points that may be surprising. First, while these markets do tend to be dominated by a single firm, market leaders are often replaced and the replacement often occurs with astonishing speed. Second, replacement occurs when a product comes along that is clearly superior, as revealed in product reviews in the leading personal computer magazines. These circumstances are nothing like lock-in.

Another surprise is what happens in markets with “locked-in” leaders. Traditional “structuralist” views of economics, as well as theories of lock-in, predict that locked-in market leaders could, and would, raise their prices. However, prices do not seem to rise as market leader is established.

Liebowitz and Margolis also examine several antitrust issues raised in the Microsoft case. Among other things, they argue that bundling of software a key issue in the Microsoft case is unlikely to be a profitable strategy unless it provides consumer benefits. They also argue that adding functionality to software (which is what bundling is) is a fundamental and inevitable characteristic of progress in this industry.

They also consider the highly speculative claim that Microsoft’s position in the software industry is a threat to innovation. Leibowitz and Margolis conclude that the real threat to progress is an environment in which government rules determine what can and what cannot be included in software products.

Finally, they note that elevated prices and restricted output are the monopoly harm that antitrust might constructively address. These conditions are not present in the personal computer software industry.

WINNERS, LOSERS & MICROSOFT is a fresh, thought-provoking, and powerful look at how high technology markets really work and the true dynamics of high technology innovation and competition.

Stan J. Liebowitz is Professor of Managerial Economics at the University of Texas, Dallas.