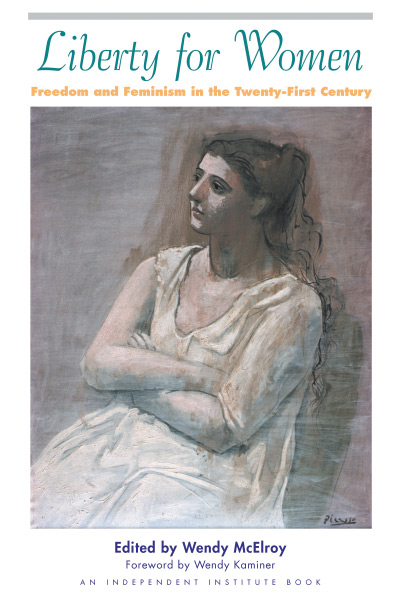 Rooted in the 19th century anti-slavery movement of abolitionism, individualist feminism is based upon the view that all human beings have a right to their own person and property. Individualist feminists consistently apply the principle of “a woman’s body, a woman’s right” to every issue that confronts women today.
LIBERTY FOR WOMEN: Freedom and Feminism in the Twenty-first Century, edited by Wendy McElroy (Research Fellow, The Independent Institute) brings together the perspectives of eighteen scholars, lawyers and activists. Shedding light on topics as diverse as marriage, abortion, midwifery, pornography, prostitution, affirmative action, fetal contracts, sexual harassment, comparable worth, technology, armed self-defense and legal reform, LIBERTY FOR WOMEN presents a wealth of ideas and information to anyone interested in women and society.

In the book’s foreword, Wendy Kaminer (The American Prospect and The Atlantic Monthly) explains that LIBERTY FOR WOMEN shows that choice is central to women’s empowerment. The centrality of choice in individualist feminism is examined in the “Foundations” section of the book, with chapters on history, law, ethics and culture provided by LIBERTY FOR WOMEN editor Wendy McElroy, legal scholar Richard Epstein (University of Chicago), and Camille Paglia (University of the Arts).

Individualist feminism is sometimes misidentified as a “conservative” tradition because it champions freely competitive markets. But unlike conservatives (and feminists of the Dworkin-MacKinnon variety) individualist feminists defend the freedom to choose in all aspects of life, including pornography and prostitution. Accordingly, Nadine Strossen (president, American Civil Liberties Union) examines the dangers of pornography laws, such as the Canadian Supreme Court’s decision in Butler v. The Queen (1992), and notes that sexual expression is conspicuously absent in totalitarian regimes. Prostitutes’-rights activist and former call girl Norma Jean Almodovar blends cogent arguments for sex-worker rights with the passionate rhetoric of one who has personally experienced the abuses of law enforcement. Law and ethics professor Martha C. Nussbaum (University of Chicago) brings a dispassionate philosophical and cultural analysis to the subject of taking money for bodily services, showing that criminalization of prostitution greatly increases violence against women.

Women and the Family

Individualist feminism defends the choice to enter into traditional marriages or unconventional ones. Mimi Gladstein (University of Texas at El Paso) relates how the managerial skills she learned as a mother were the same ones she used to manage an English department, much to the chagrin of male colleagues. Ellen Frankel Paul (Bowling Green State University) offers a free-market analysis of “fetal rights,” placing this legal concept into a framework of “freedom of contract.” Alexander Tabarrok examines abortion from a legal, historical, economic and moral perspective, and places it in the broader context of the right to choose.

Feminism has made highly visible inroads into the workplace. Wendy McElroy applies free-market economic principles to affirmative action and argues that it damages both the workplace and the educational system. Cathy Young (Reason Magazine and Boston Globe) brings common sense to bear on sexual harassment in the wake of Clinton’s sex scandals. Ellen Frankel Paul analyzes one of the more tyrannical workplace proposals—“comparable worth”—and explains why the idea is unworkable and badly flawed in its very conception.

Rita J. Simon (Women’s Freedom Network and University of Maryland) corrects many of the errors and assumptions of feminist statistics on violence and women to reveal a more accurate picture. Attorneys Richard W. Stevens, Hugo Teufel III and Matthew Y. Biscan cogently argue that women should empower themselves through self-defense with firearms rather than rely on government, which tragically fails millions of victims every year.

Wendy McElroy challenges the current feminist rejection of the new reproductive technologies, arguing instead for the liberating nature of medical progress in these areas. Lois Copeland, M.D., expresses her frustration at being unable to offer the best medical care and consultation to patients because of governmental interference. Faith Gibson (California College of Midwives) examines how male obstetricians conspired with government regulators to eliminate competition from midwives—despite the fact that midwives have always had better records of safety than obstetricians (a fact still true today). Janis Cortese (3rd WWWave) explains “third-wave” feminism, and why a rebellious, pro-technology, pro-sex new generation.

LIBERTY FOR WOMEN is an eye-opening book that vividly charts a new feminism for the 21st century in a highly lucid, provocative, and inspiring way. “Choice” is the key, and every woman’s choices and expressions of self-ownership must be equally and legally respected, from housewives to CEOs. Only then can a meaningful debate arise over which choices may be the best ones for women to make freely.

Wendy McElroy is a Research Fellow at The Independent Institute. Her other books include The Independent Institute volume, Freedom, Feminism and the State; plus Sexual Correctness; The Reasonable Woman: A Guide to Intellectual Survival; Dissenting Electorate: Those Who Refuse to Vote and the Legitimacy of Their Opposition; XXX: A Woman’s Right to Pornography; Queen Silver: The Godless Girl; and Liberty 1881-1908: A Comprehensive Index. Ms. McElroy was Series Editor for Knowledge Products’ popular audio-tape series, The World of Philosophy, The World’s Political Hot Spots, The United States at War, and The United States Constitution, and she authored the scripts for Vindication of the Rights of Woman and The Liberator, Civil Disobedience, and Discourse on Voluntary Servitude in the Audio Classics Series. A weekly columnist for FOX News.com, she is a contributing editor to several periodicals, the author of numerous articles in various magazines and scholarly journals, and the editor of the popular feminism site, IFeminists.com.