Synopsis | About the Author 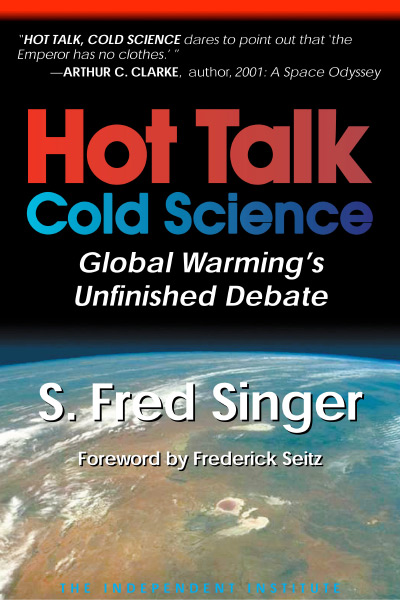 According to proponents of the Global Climate Treaty, a consensus within the scientific community supports the view that human-caused global warming is occurring and that it threatens human health and well-being. Nothing could be further from the truth. Far from viewing the existence of global warming as “settled,” most atmospheric scientists and climate specialists hold that the global warming issue should be considered “unfinished business” requiring much further research.

In HOT TALK, COLD SCIENCE: Global Warming’s Unfinished Debate, astrophysicist S. Fred Singer probes the literature on climate change and lays out the scientific case against the likelihood of an imminent, catastrophic global warming. Theoretical computer models to the contrary, man-made global warming has not been documented. But even if it were to occur, the evidence suggests that it would largely be benign and may even improve human well-being, Singer argues.

Rather than embark on economically destructive policies to solve a problem that to the best of our knowledge does not exist, Singer urges policymakers to adopt a “no regrets” policy of continued research and unimpeded economic growth. We would then have more scientific knowledge, technology, and economic resources with which to confront climate warming, if we ever discover that it is occurring and poses a real threat. But prematurely mandating severe reductions of greenhouse gas emissions would make us—and developing countries, especially—poorer and less able to cope with any future problems.

No Scientific Consensus of Warming

That there is no scientific consensus of a global-warming threat is indicated by surveys of active scientists. A November 1991 Gallup poll of 400 members of the American Meteorological Society and the American Geophysical Union found that only 19 percent of those polled believed that human-induced global warming has occurred.

That same year, Greenpeace International surveyed 400 scientists who had worked on the 1990 report of the influential U.N. Intergovernment Panel on Climate Change (IPCC) or had published related articles. Asked whether current policies might instigate a runaway greenhouse effect, only 13 percent of the 113 respondents said it was “probable” and 32 percent “possible.” But 47 percent said “probably not”—far from a consensus.

In recent years, research on global climate change has led even more scientists to doubt that global warming is upon us or that it would soon bring disaster (Science, May 16, 1997). Yet these doubts are characteristically downplayed in IPCC reports. While the body of the IPCC’s 800-page, 1996 report, The Science of Climate Change, mentioned some doubts (albeit cryptically), the report’s much-publicized, politically approved Summary for Policymakers did not. This gave the false impression that all 2000-plus scientists who contributed to (or had their work cited in) the report alsosupported the view that man-made global warming was occurring or posed a credible threat. The IPCC report even indicated that the scientists who reviewed and commented on earlier drafts endorsed the report—whether their comments on the drafts were positive or negative.

Man-Made Global Warming Not in Evidence

The announced purpose of the Global Climate Treaty is to avoid “dangerous interference with the climate system.” However, this goal is entirely arbitrary because we have no scientific guidance for determining what constitutes a “dangerous interference.” Nor do we have evidence that human activity has had much effect on world climate.

While it is true that global temperatures have risen about 0.5 degree Celsius in the last century, most of this warming occurred before 1940, while most of the human-caused CO2 emissions occurred after 1940. Further, we simply do not know whether climate variability depends on carbon dioxide concentrations. Scientists are only now beginning to study the role of other potential factors in global climate change, such as the interaction between the atmosphere and oceans, variations in solar radiation, and the cooling effects of volcanic emissions and sulfate aerosols.

By and large, General Circulation Models (GCMs) have not yet considered these factors, which may explain why computer models cannot account for observed temperatures. Many models indicate that global warming has arrived and will intensify unless we reduce greenhouse gas emissions like CO2. However, weather satellite and balloon-borne radiosonde data indicate that global temperatures have fallen slightly since 1980. (But neither the weather satellite data nor the discrepancy between them and the GCMs are mentioned in the IPCC Policymakers’ Summary.)

While surface temperatures show slight increases—notably smaller than those predicted by the models—this appears to be due to the urban heat island (UHI) effect, stemming from population increases near weather stations. After correcting for the UHI effect, the years around 1940 emerge as the warmest years of the century in both the U.S. and Europe.

The gap between the satellite observations and existing theory is large enough to cast serious doubt on all computer-model predictions of future warming. Whatever the cause of the gap, we cannot rely on GCM forecasts of future warming. (GCMs are not even consistent with each other; their temperature forecasts vary by some 300 percent.) Until GCMs become validated by actual climate observations, they should not be used as the basis for policy.

Would Global Warming Be a Threat?

Given the incessant talk about the purported catastrophes a global warming might cause—severe storms, coastal flooding, increases in mosquito-carried diseases—it sounds strange to hear about benefits from a global warming. Nevertheless, the scientific literature supports the view that increases in CO2 concentration and global temperatures, were they to materialize, might actually improve human well-being. Some benefits include a CO2-enriched biosphere more conducive to plant growth, longer frost-free growing seasons, greater water efficiency for plants, and more available farmland at higher latitudes.

A reduction in severe storms would be another likely benefit if global warming were to occur. Since a global warming would probably mostly warm the latitudes farther north and south, the temperature gradient between the equator and the poles would fall, thereby reducing the severity of storms. (Contrary to anecdotal reports, theory and observations indicate that severe storms, both tropical and extratropical, have not increased in the past 50 years. In fact, North Atlantic hurricanes have noticeably declined in frequency and in intensity.)

Rising sea levels, another alleged consequence of a global warming, may also be a phantom problem. It seems likely that a global warming would lower, rather than raise sea levels, because more evaporation from the oceans would increase precipitation and thereby thicken the ice caps of Greenland and Antarctica. This possibility is supported by an observed inverse correlation between the rate of rise of the sea level and tropical sea surface temperature.

If increases in carbon dioxide concentrations do become a problem, a policy of ocean fertilization—to stimulate the growth of phytoplankton and speed up the natural absorption of CO2 into the ocean, as recently documented in field testing—seems more prudent (and cheaper) than energy rationing. Ocean fertilization would also likely bring an important side benefit: vast ocean deserts could be turned into thriving fisheries. Developing countries in particular would benefit from this less expensive policy by investing the saved wealth in strengthening the resilience of their economies, safeguarding against naturally occurring harmful climate events, and improving their health care systems.

S. Fred Singer is a Research Fellow at The Independent Institute, President of the Science and Environmental Policy Project, and a Distinguished Research Fellow, Institute for Space Science and Technology. He was the first director of the U.S. Weather Satellite Service. He is the former director of the Center for Atmospheric and Space Physics, and former Chief Scientist, U.S. Department of Transportation.