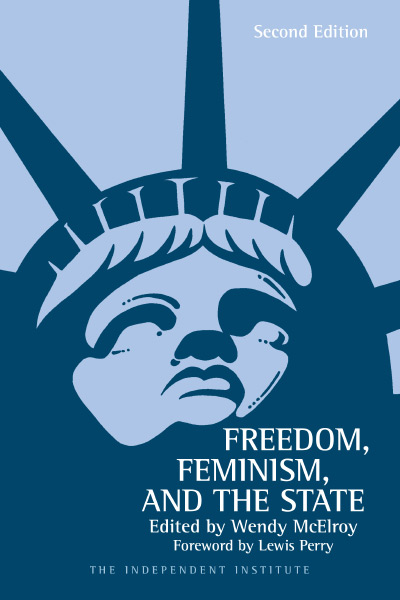 Mainstream feminism is nowadays intimately associated with demands for State intervention, as attested by campaigns for government-funded abortion, for laws mandating equal pay and outlawing sexual discrimination, for taxpayer-financed day care, and for legal and economic privileges for pregnant women. But feminism’ s roots are radically individualistic, anti-political, and anti-State. Arising out of the pre-Civil War anti-slavery movement, the early women’s movement recognized clearly that government was the real obstacle preventing women from achieving freedom and equal rights. And despite the recent positions of many prominent feminists, today an increasing number of individualist feminists have become consistent foes of the State.

The Independent Institute’s latest book, Freedom, Feminism, and the State: An Overview of Individualist Feminism, unearths and revitalizes this forgotten heritage, providing a basis for its modern resurgence. The volume is edited by Wendy McElroy, Research Fellow at the Independent Institute and a prominent individualist-feminist author and speaker. Noted historian Lewis Perry of St. Louis University provides the book’s foreword.

McElroy brings together twenty-two selections from the individualist feminist tradition, integrating them with a fine historical introduction. These striking essays span the history of the women’ s movement. Some are nineteenth-century classics from such early giants of individualist feminism as Angelina and Sarah Grimké and Voltairine de Cleyre; others are penned by well known figures of the early twentieth century, such as Suzanne LaFollete and Emma Goldman; and still others are more modern writings from the likes of Joan Kennedy Taylor, Barbara Ehrenreich, and Deirdre English. Overall they offer the individualist perspective on nearly every feminist issue, from birth control to war, from the family to the marketplace, and everything in between.

No one will fully agree with every essay in this volume. The individualist feminists are too diverse, too unique, too independent—too individualistic. But as Lewis Perry points out in his foreword, Freedom, Feminism, and the State helps to recover a lost historical consciousness with pressing relevance today. “For feminists, the disastrous strategies of the ERA campaign and floundering leadership ought to provoke a reexamination of goals and principles.” Perhaps this vibrant collection will inspire such a reexamination and revitalize the principle that individual liberty is the imperative for all women, as well as all men.

Women versus the State

“The investigation of the rights of the slave has led me to a better understanding of my own.” These words commence the first selection in Freedom, Feminism, and the State, a letter written by Angelina Grimké in 1837. Grimké was the daughter of a slaveholder who became one of the foremost crusaders against slavery and also the first woman in America to lecture before mixed audiences of men and women.

Hers is a particularly appropriate opening selection, because as McElroy points out in the book’s introduction, “As an organized force, feminism dates from abolitionism in the early 1830s.” Steeped and practiced in the defense of the individual rights of the slave, the early feminists applied the same principles to women. Their conception of women’s rights, therefore, was in keeping with the libertarian thrust of the Declaration of Independence and the American Revolution. They conceived of rights as providing a moral jurisdiction within which the individual ought to be free from all outside interference.

Feminists recognized that government must always be one of the primary transgressors of women’s rights—a point forcefully emphasized in the other four essays of the book’s first section. These essays also demonstrate the historical continuity and timelessness of individualist feminist concerns. Two are from the past, but two are recent, arguing that government today is still as much an enemy of women as ever, if not more so. Consider, for instance, Jean Bethke Elshtain, warning to the feminist movement from the April 1982 issue of Democracy. “For feminists to discover in the state the new ‘Mr. Right,’ and to wed themselves thereby, for better or for worse, to a public identity inseparable from the exigencies of state power and policy would be a mistake.”

A subsequent section of Freedom, Feminism, and the State, on women and the family, makes very clear why early feminists had no trouble identifying government as their main problem. Feminism arose at a time when women, in addition to being unable to vote, hold public office, or serve on juries, were considered wards of their nearest male relative or chattels of their husbands, who legally controlled all their property, their earnings, and their children. In most states, women could not hold or dispose of property, sue in court, make contracts, or keep the wages from their labor. Sarah Grimké, Angelina’s older sister, complained in 1837: “there are few things which present greater obstacles to the improvement and elevation of woman to her appropriate sphere of usefulness and duty, than the laws which have been enacted to destroy her independence, and crush her individuality; laws which... rob her of some of her essential rights....The various laws leave women very little more liberty, or power, in some respects, than the slave.”

Even as late 1886, after emancipation of the slaves, sixteen-year old Lillian Harman was thrown into the Oskaloosa County jail in Kansas for a non-State, non-church marriage that evaded such conventional arrangements. It is thus appropriate that Freedom, Feminism, and the State also include her inspiring call for social and economic freedom.

McElroy emphasizes that the Civil War dealt a “stunning blow” to individual liberty. Mainstream feminism began to concentrate—nearly to the point of obsession—upon securing the vote for women, to the exclusion of all other issues. Indeed, many suffragists compromised on subsidiary questions and even embraced such government interventions as prohibition and social purity legislation. No longer grounding their arguments in the principle of natural, individual rights, mainstream feminists increasingly relied on pragmatic appeals. Some went so far as to attempt to show how women voting would accelerate the cause of government intervention because of women’s moral superiority. This stood in marked contrast to the years prior to the war, when the women’s movement showed almost scant interest in suffrage, other grievances taking precedence.

Individualist feminists, in contrast, still continued a lonely crusade for the reform of birth control and marriage laws, often at great personal risk. Moses Harman, Lillian Harman’s father, for example, endured a chilling, ongoing confrontation with government police power over the publication and mailing of birth control information. Repeatedly imprisoned for violating the Comstock Laws, Harman served his last sentence, a year at hard labor, when he was 75.

Lillian Harman, Moses Harman, and other individualist feminists all went to jail for exercising fundamental freedoms that we take for granted today. Yet their names have been relegated to obscurity by mainstream feminism, whose own pragmatic record during this period shows far less political and personal courage. Fortunately, McElroy resurrects these episodes both in her introduction and in a 1906 article from Harman’s own publication. McElroy’s own discussion of the heated question of abortion is an incisive defense of the right to choice unencumbered with pleas for government funding and fully grounded in the traditional individualist premise of self-ownership.

But what of suffrage? Did individualist feminists actually oppose extending the vote to women? Some in fact did, as a logical extension of their opposition to all political power. Yet on this issue individualist feminists were divided, and so Freedom, Feminism, and the State reprints arguments of both sides. In opposition we have a timeless, hard-hitting essay from Lysander Spooner: “Women are human beings, and consequently have all the natural rights that any human beings can have. They have just as good a right to make laws as men have, and not better; and that is just no right at all. No human being, nor any number of human beings, have any right to make laws, and compel other human beings to obey them.” Taking a more conventional view in favor of suffrage is a selection from Ezra Heywood’s Uncivil Liberty.

The book’s concluding essay, by Emma Goldman, tackles the subject of women and war. Although an anti-statist, Goldman was not a full individualist feminist. Yet as McElroy points out, “Goldman’ s adamant opposition to state interference in the life of the individual made her a valuable fellow traveler on many issues.” The reprinted essay, a ringing indictment of the State’s tendency toward war, arose out of Goldman’s anti-draft activities during World War I.

Women and the Market

No question better clarifies what distinguishes socialist and individualist feminists than their attitudes toward the market. In contrast to the open hostility of the many feminists, modern individualist feminists embrace the market’ s freedom and opportunity. Rosalie Nichols in a contemporary article asserts that “feminism and a regulated economy are mutually exclusive and antagonistic.... Only a free society can be feminist. And the economic system of a free society is Laissez-Faire Capitalism.” Sharing Nichols view is Suzanne LaFollette, a protege of Albert Jay Nock. In an excerpt from her 1926 book, Concerning Women, she pointed out “It is the industrial revolution more than anything else, perhaps, that women owe such freedom as they now enjoy.” Joan Kennedy Taylor contributes a feminist denunciation of such government interference with the market as protective labor legislation.

Milton Friedman and other free market advocates have long opposed medical licensing laws as unnecessary and harmful interventions that artificially raise the cost of medical care. But the McElroy collection, by giving us an insightful history and feminist analysis of these laws by Barbara Ehrenreich and Deirdre English, shows how they closed off legitimate medical alternatives and created a male dominated medical hierarchy in the process.

Wendy McElroy is a Research Fellow at The Independent Institute. Her other books include The Independent Institute volume, Liberty for Women: Freedom and Feminism in the Twenty-first Century; plus Sexual Correctness; The Reasonable Woman: A Guide to Intellectual Survival; Dissenting Electorate: Those Who Refuse to Vote and the Legitimacy of Their Opposition; XXX: A Woman’s Right to Pornography; Queen Silver: The Godless Girl; and Liberty 1881-1908: A Comprehensive Index. Ms. McElroy was Series Editor for Knowledge Products’ popular audio-tape series, The World of Philosophy, The World’s Political Hot Spots, The United States at War, and The United States Constitution, and she authored the scripts for Vindication of the Rights of Woman and The Liberator, Civil Disobedience, and Discourse on Voluntary Servitude in the Audio Classics Series. A weekly columnist for FOX News.com, she is a contributing editor to several periodicals, the author of numerous articles in various magazines and scholarly journals, and the editor of the popular feminism site,

Buy Freedom, Feminism, and the State