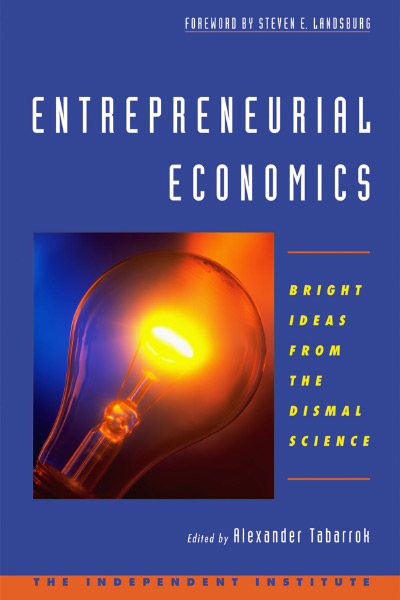 Economics has long labored under the misnomer, “the dismal science,” yet economics is a fascinating and essential aid for understanding the world—and for improving it. More than 200 years after its birth, economics still offers new and important insights for improving human health, security, prosperity, and happiness, as is demonstrated in Entrepreneurial Economics: Bright Ideas from the Dismal Science, edited by Alexander Tabarrok (Oxford University Press/The Independent Institute).

Entrepreneurial Economics is a treasure trove of promising solutions to a vast array of social and economic problems, old and new. Through the novel application of basic economic principles, twenty economists examine such diverse issues as genetic testing, patents, health and wealth insurance, legal gridlock, probation and parole, urban transit, information aggregation, bankruptcy, investor protection, and even the shortage of human organs.

Although companies today possess many effective risk-management tools, households still must cope with very large economic risks that are outside of their control. Recently, for example, South Koreans and Argentinians have faced severe shocks to their incomes from macro-economic events. Similarly, most people have a very large fraction of their wealth bound up in their home. But housing prices can rise and fall dramatically thereby causing huge swings in a homeowner’s wealth and making future planning difficult. In chapter 2, Stefano Athanasoulis, Robert Shiller and Eric van Wincoop explain how national-income (and other macro markets) could be created to enable individuals to hedge against the risk of macroeconomic downturns. Markets for hedging against occupational risks, they further explain, could also be created. As Alexander Tabarrok explains in the introduction, dentists could hedge in these markets against the risk (to dentists!) that some new anti-cavity innovation would erode their income. Policymakers might even discover that private income markets could replace our current, inefficient system of government unemployment insurance. National-income markets could also make politicians more concerned with the long-run impacts of their policies.

Health and life insurance could also be made more efficient and more equitable using new markets. In chapter 3, Alexander Tabarrok shows how gene insurance would solve the problem of some individuals facing higher health insurance premiums if genetic testing revealed a disease-associated gene. Before taking a genetic test an individual could buy insurance to cover any increase in premiums. Instead of shunning so-called bad risks, insurers would eagerly compete to offer policies to all individuals regardless of their genetic makeup. In chapter 4, John Cochrane shows how markets could also solve the problem of unexpected premium increases stemming from any source. Cochrane’ s time-consistent insurance contracts would allow individuals to guarantee insurance coverage without locking themselves to one insurance firm.

Markets collect and integrate information remarkably well. Market prices, for example, reflect the decisions of thousands of highly motivated consumers, producers, and investors. Forecasts based on market prices tend to be far more accurate than forecasts that ignore them. If market prices could somehow aggregate information about government policies, then policymakers and voters would have a better basis for making decisions than the questionable sources they often rely upon. In chapter 5, Robin Hanson explains how new markets could be created to provide more reliable information on public policy. If Hanson is right, then perhaps one day, instead of quoting an expert, New York Times editorials will refer to the latest quote on “Health Care Plan A” available in the business pages.

The Shortage of Human Organs

Every year, thousands of people die while waiting for an organ transplant, even though healthy organs are buried or burned. In chapter 6, Andy Barnett, Roger Blair, and David Kaserman suggest eliminating current laws that forbid the sale of human organs. They also confront objections to a futures market in human organs and describe the superiority of the market approach to what superficially looks like a similar proposal, compensating donor families.

Prices are not the only way in which the market for organs can be made to clear. In chapter 7, Alexander Tabarrok discusses some possible problems with using price as a clearing mechanism. Instead of viewing the human organ shortage as a pricing problem, he argues that it is a classic “tragedy of the commons” problem whose solution is “enclosure,” i.e., restriction of access to organ transplants to those who previously agreed to be organ donors—in short, a “no give, no take” rule. Your pledge to bequeath an organ is the premium you pay for the right to receive a needed organ.

Steven Landsburg’s chapter on the bail bond system nicely illustrates how the novel application of economic principles can enhance the criminal justice system. Landsburg proposes a system to give judges greater incentive to release the lowest risk criminal defendants. Under his plan, judges would be paid “bounties” when released defendants do not commit crimes and be fined when they do. By adjusting the fines and bounties, society can choose how strict or lenient it wants the bail system to be while maintaining strong incentives to release only those defendants least likely to commit future crimes. Landsburg’s plan need not cost taxpayers a dime, since fines and bounties can be uniformly raised or lowered so that, on average, judges’ salaries do not change.

About 38 percent of those arrested for felonies are already on parole, probation or pre-trial release for another crime. In chapter 9, Morgan Reynolds proposes that parolees be required to post bail as a condition of parole. The risk of bail forfeiture would both raise the costs of crime to the parolee and give bondsmen a strong incentive to help parolees walk the straight and narrow.

Because class-action suits often involve thousands of plaintiffs, letting each plaintiff have his day in court is time consuming and expensive. David Friedman in Chapter 10 proposes a unique method of settling disputes based upon the fair method for cutting a cake—you cut the cake and I choose which half I want! In Friedman’ s proposal the plaintiffs’ lawyer makes a claim for damages on behalf of each plaintiff and then defense lawyers choose which cases will be litigated. Plaintiffs with cases that go to trial will receive the trial award, while those with non-tried cases receive their claimed amount multiplied by the ratio of awarded damages to claimed damages in the tried subset. Lawyers for the defense will choose to litigate those cases with the most overclaimed damages, thereby driving down damages in the non-tried subset. Knowing this, the plaintiffs’ lawyer will try to make fair claims—i.e., claims equal to what a jury would actually award in a trial. Friedman’ s proposal could greatly simplify and expedite tens of thousands of cases now awaiting adjudication.

Bankruptcy is simple in principle but costly in practice, causing company assets to deteriorate even more. Phillippe Aghion, Oliver Hart, and John Moore (AHM) propose to significantly lower the costs of transferring ownership rights by, among other things, converting all debts into a single class of equity, thus eliminating conflicts that result from classes of debt holders having different voting rights. Management would also be allowed to submit bids, creating a more nuanced disciplining of management than under current bankruptcy procedures. AHM also suggest that firms be allowed to offer shareholders and lenders their own, perhaps unique, bankruptcy codes. Competition could produce better codes just as it produces better blue jeans.

In chapter 13, Michael Kremer presents an innovative plan to improve the U.S. patent system. Patents prevent copiers from using an inventor‘s ideas free of charge and thus increase the incentive to invent. But they also grant market power to the patent-holder, who can then charge higher than competitive prices. Kremer’ s proposal resolves this dilemma. If a government could estimate the sum of consumer surplus, profit and deadweight loss associated with a patent, it could easily solve the problem by buying the patent for that sum and placing it in the public domain. Such patent buyouts, Kremer explains, would eliminate the deadweight loss caused by monopoly pricing and raise the incentive to invest in research. Yet such a plan has obvious problems of information (how can the government know what the patent is worth?) and problems of incentives (the government might pay for patents based upon political pressure). To help eliminate these problems, Kremer proposes a creative use of auctions (see chapter 13 for the details!). Markets, not governments, would estimate the value of patents, and the public nature of the auction would help to alleviate the problem of government turpitude.

One virtue of Kremer’s idea is that it can be tried in small doses. Indeed it is not even necessary that the government be involved. Today consumers and foundations contribute billions of dollars directly to medical research. Perhaps some of these contributions would be better spent supporting research indirectly through a patent auction.

KMR would resolve this dilemma by creating a new property right, “curb rights.” A curb right would give the owner the right to use a certain section of the curb to pick up and drop off transit passengers at a certain time. Curb rights would give owners of scheduled services the incentive to invest in getting customers while also avoid monopoly and would allow jitneys to retain their place in the transit system. Despite billions spent on public transit, city transportation remains a vexing problem in most American cities. Curb rights are a promising innovation that transcends the usual debate.

As a result, Entrepreneurial Economics gives valuable insights into the power, scope and relevance of economic thinking and provides an intriguing, inspiring and irreplaceable resource for seeking real solutions to complex social problems.