Returning Education to the Schools and Parents: Independent Institute 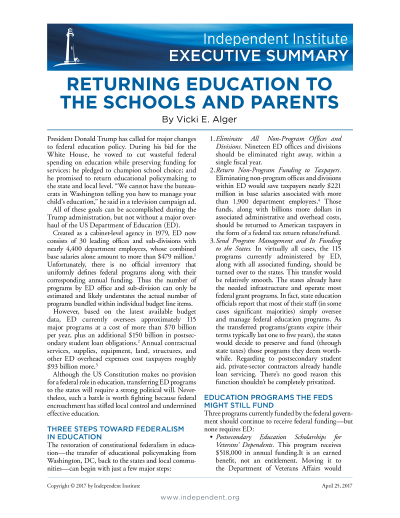 President Donald Trump has called for major changes to federal education policy. During his bid for the White House, he vowed to cut wasteful federal spending on education while preserving funding for services; he pledged to champion school choice; and he promised to return educational policymaking to the state and local level. “We cannot have the bureaucrats in Washington telling you how to manage your child’s education,” he said in a television campaign ad.

All of these goals can be accomplished during the Trump administration, but not without a major overhaul of the US Department of Education (ED).

Created as a cabinet-level agency in 1979, ED now consists of 30 leading offices and sub-divisions with nearly 4,400 department employees, whose combined base salaries alone amount to more than $479 million.[1] Unfortunately, there is no official inventory that uniformly defines federal programs along with their corresponding annual funding. Thus the number of programs by ED office and sub-division can only be estimated and likely understates the actual number of programs bundled within individual budget line items.

Although the US Constitution makes no provision for a federal role in education, transferring ED programs to the states will require a strong political will. Nevertheless, such a battle is worth fighting because federal encroachment has stifled local control and undermined effective education.

THREE STEPS TOWARD FEDERALISM IN EDUCATION

The restoration of constitutional federalism in education— the transfer of educational policymaking from Washington, DC, back to the states and local communities—can begin with just a few major steps:

OTHER EDUCATION-RELATED WORK THE FEDS COULD MAINTAIN

Information-gathering and research into effective practices could continue at the federal level, but these efforts do not require ED:

THE STATES’ RETURN ON EDUCATIONAL FEDERALISM

Without eliminating a single ED program, the President and Congress could act immediately to restore state and private-sector management of programs costing approximately $200 billion. Alone, these funds should suffice to cover states’ oversight and program management costs; however, this funding likely understates the actual savings states will realize from direct management of education programs, because they will no longer incur associated federal regulatory costs.

While there is no systematic reporting on the actual costs and paperwork burdens imposed on state education agencies and schools by ED program mandates, available evidence suggests these costs are significant. From 2002 to 2009, for example, ED’s paperwork burden increased by an estimated 65 percent.[5] Program-specific cost estimates in recent years have ranged from 7.8 million personnel hours annually, at a cost of $235 million just for Title I mandates[6], to nearly $3.1 billion in paperwork costs associated with “gainful employment” requirements for for-profit postsecondary institutions.[7]

Another recent estimate found that Common Core has cost the states $80 billion—nearly 20 times more competitive grant program that ushered in Common Core— yet benefits to students, teachers, and schools remain elusive.[8] Another estimate puts the annual cost of ED regulation and intervention at $13 billion.[9] In addition, studies have begun to chronicle examples of how ED has actually complicated educational advancement in the states and stifled innovation largely because various department mandates overlap and contradict one another.[10]

A strong case for federalism in education can be argued on many grounds: Constitutional, economic, political, and moral reasoning all offer robust justifications for reducing the role of the educational bureaucrats ensconced in Washington, DC. Parents—not distant bureaucrats—are endowed with unalienable rights and responsibilities over their children’s education. State and local taxpayers deserve accountability for how public funds are spent—not bureaucratic indifference. And children are due the blessings and opportunities that unfold when their schools have the resources, competence, and flexibility to deliver educational excellence.