Foreword to the First Edition of Beyond Politics: Independent Institute 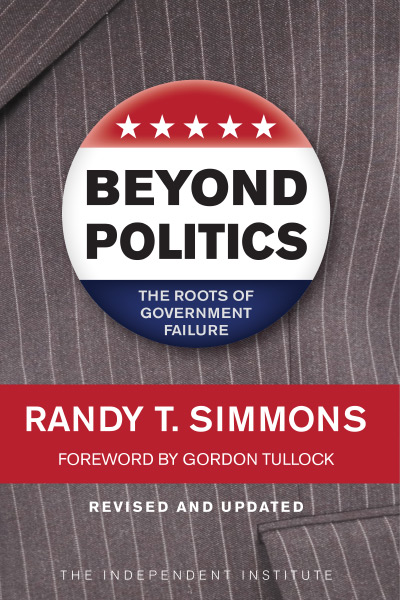 The following is the foreword by Gordon Tullock to the first edition of Beyond Politics: The Roots of Government Failure

The study of politics has initiated a revolution in recent years. That this revolution has hardly begun is attributable not to any caution or incompleteness but to the fact that most people are ignorant of it.

Nevertheless, this approach is, rather mysteriously, very controversial. I have been denounced with great vigor for saying simply that the customer in the supermarket and the voter in the voting booth are the same person.

On the basis of these assumptions, it is possible to develop a new theory. Although the theory, called public choice, is based on economics and uses many of its tools, it is a genuinely original creation of political science rather than simply a transfer. (It should be noted that awareness of the new theory is fairly common in economics departments, though the subject is regarded as a little odd because economists are, after all, not students of politics.) The economic conceptions and tools, although helpful, were inexact for use in political theory, and hence it was necessary to develop new ones.

For this approach, the government is not a romanticized generator of public goods or a protector of virtue but simply a rather prosaic set of instruments for providing certain types of goods and services that may be hard to provide. Instead of thinking of the government as something that stands above the market, public choice theorists regard the government and the market as parallel organizations sharing a basic objective: filling the demands of the citizens.

Some of these demands, that for food for example, are no doubt best served by the market. Nonetheless, governments around the world are involved in the food production business. They make bread more expensive and transfer funds from the rather poor consumer of bread to the muchbetter- off farmer in Western countries. Interestingly, in Africa, where the farmers are poorer than the consumers, the system is used to transfer money from the farmers to the consumers.

In contrast, such problems as air pollution are widely viewed as properly handled by government even though they are resistant to both market and government solutions. People do not hold this view because air pollution is a more important matter than bread—on the contrary, food is fundamentally more vital to our lives than cleaner air—but because they see government rightly or wrongly as a better instrument for coping with it. Once again, society maintains two parallel organizational structures in the hope that they will provide for citizens’ wants better than either one could by itself.

Most public choice theorists do not think the government provides very high-quality service. Nor do they think that the market is perfect. In economics, the theory of perfect competition is considered by many to be a mathematical convenience that permits analysis of some economic problems with greater speed than is permitted by the classical economics of Smith and Ricardo; the theory does not fit the world perfectly.

Similarly, the new theory of how politics works does not yet fit the world perfectly. We hope for its improvement. One of the advantages of being in a new field is that we can legitimately blame gaps and holes on the newness of the work. Economics has been around for a long time, and expectations of further revolutionary change are not so easy to come by.

There is a subdivision of public choice with a good deal of elaborate mathematical work. It is normally called “social choice.” The bulk of the authors in public choice are not particularly mathematical and resemble Ricardo more than they do Hurwiez. Whether the mathematical complications in either public choice or economics are pioneering in important new areas or practicing mere escapism is an open question.

However, this book is about a new approach, one just making its imprint. There are now public choice societies in the United States—where the field has reached its highest development—as well as in Europe and Japan.

The originator of the subject was an Englishman, Duncan Black, but its first major development occurred in the United States. The American journal Public Choice is now twenty-five years old and the American Public Choice Society has almost 1,000 members. The European Public Choice Society is smaller, but nevertheless flourishing, and has its own journal, Scelte Pubbliche. The Japanese have also vigorously entered into this field, although they have not yet established structures as formal as those provided by either the American or the European societies. The Japanese journal is Public Choice Studies. In January 1994, public choice scholars from Japan, Taiwan, and Korea met in Hong Kong, where they were attending the Pacific Rim Conference of the Western Economic Association. They decided to establish an Asian Public Choice meeting and were hopeful that it would draw participation from more than just those three countries.

The flourishing state of the field in the past few years as been evident especially in the United States, where four additional journals have been started: The Journal of Constitutional Political Economics, Rationality and Society, Journal of Theoretical Politics, and Economics and Politics. Thus, the academic side of public choice is now well established at the higher levels. There are many scholars actively writing, publishing, and doing research in the field.

If the new approach is to have impact on our political system—it does, after all, give a more accurate and useful picture of government than the old approaches did—then people without graduate degrees need access to it. We need a book for the general reader, the kind one might find in the popular bookstore chains.

Mitchell and Simmons again come to our rescue. This book clearly is excellent for the ordinary informed citizen. I cannot truthfully say that it is an easy book, because the ideas included will be new to a great many of its readers. It is, however, not written as a book to be studied instead of read. Ordinary readers who are willing to temporarily leave aside the conventional wisdom about our politics will find that they can go through this book quickly and productively.

The book is a major contribution to informed public comment. There are many very difficult problems in connection with government, and we should try to solve them on the basis of the best learning available. This book will make that learning available to almost anyone who has a normal education and who is willing to devote a little effort to the task.

In fact, the book is so well written and the subject so important and exciting that a great may people will find it very entertaining even if they do learn while reading it. We can welcome this work as a major step forward in understanding the dynamic of government and markets and how both affect us all. 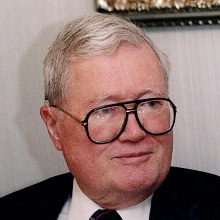 RELATED
Fine. Blame Ticketmaster for the Taylor Swift Fiasco, but Don’t Overlook the Fundamental Cause.
Can’t Get Taylor Swift Tickets? Blame Other Fans, Not Ticketmaster
End the COVID National Emergency Now
Let Them Compete: Labor Markets Are Workers’ Friends, Not Their Enemies
Left Libertarians, Dobbs, and the Ninth Amendment
Why Doesn’t This Economist Want His Daughter to Be a Feminist?
As California Schools Fall Even Further, A Charter School Shows How To Succeed
Why Do Progressives Support Democrats? Part Two
There Are 8 Billion People. We Should Celebrate Superabundance, Not Lament ‘Overpopulation’
What Difference Did the Election Make?
Why Do Progressives Support Democrats? Part One
Enjoyment of the Upcoming World Cup Will Come at a Price

Beyond Politics (First Edition)
Markets, Welfare and the Failure of Bureaucracy