←  ABOUT US
About
›
Board of Advisors, In Memoriam
›
Person Detail
Gordon Tullock 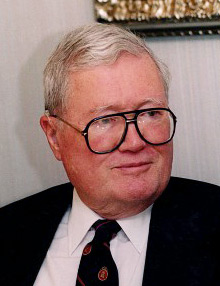 Professor Tullock is author of twenty-three books and several hundred articles in economics, public choice, law and economics, bio-economics and foreign affairs. He is best known for such works as The Calculus of Consent (with James M. Buchanan), The Logic of the Law, The Politics of Bureaucracy, The Social Dilemma, Autocracy, The Economics of Non-Human Societies, Rent Seeking and On Voting. Professor Tullock's 1967 article entitled: “The Welfare Costs of Tariffs, Monopolies and Theft” is a widely cited classic that has generated a major ongoing research program in the political economy of rent seeking.