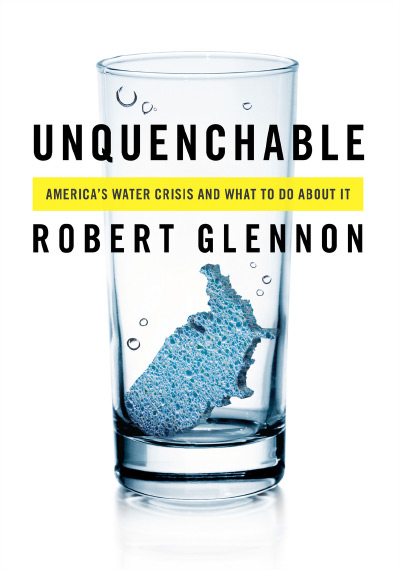 Unquenchable
America’s Water Crisis and What to Do about It
Robert Glennon
Kindle Hardcover Paperback Audiobook MP3 CD
This book review appeared in the Spring 2010 issue of The Independent Review.

In the 1920s, Ludwig von Mises sparked a debate among economists about the feasibility of socialism, claiming that without market prices, central planners cannot rationally allocate resources (Socialism: An Economic and Sociological Analysis, translated by J. Kahane [Indianapolis, Ind.: Liberty Fund, (1922) 1981]). The history of central planning in the Soviet Union, China, and elsewhere has proven Mises correct. The United States has tried central planning in some areas, with a similar lack of success. Robert Glennon’s new book Unquenchable demonstrates the failure of the political allocation of water. The United States faces a water crisis because the fastest-growing states in recent decades have very limited supplies of water. Yet through a variety of measures, the public sector effectively guarantees that it will meet the demand for water at a nominal price. The expectation (or right) of low-cost water supply creates a kind of open-access resource. The familiar tragedy of the commons ensues, and water supplies are now barely adequate in many parts of the country. With the inevitability of periodic drought added to the equation, it is only a matter of time until a major U.S. city runs out of water.

Glennon carefully documents the many elements of the nation’s inefficient water system that are setting the stage for a potential future calamity. Groundwater is available on an open-access basis because anyone has a right to extract groundwater beneath his property, and in many states no authority exists to require permitting or metering of wells for personal use or irrigation. Surface water in western states is allocated under the prior-appropriation doctrine, in which the “first in time” user has a right to divert water, but only for his own use, not a full right to the water (including, for example, a right to resell it). Farmers and irrigation districts can thus use water only for agriculture, and therefore they do not have to bear the opportunity cost of more valuable industrial, commercial, and residential uses of water. The Bureau of Reclamation and the Army Corps of Engineers have built numerous projects across the country at taxpayer expense—including hundreds of dams, the All-American Canal, the Central Arizona Project, and the Central Utah Project—to deliver water to users at a fraction of its full cost. The public sector essentially commits to provide water to a region’s population, however large that population may become, at a nominal charge. Therefore, the population in the Southwest and the Southeast is growing without consideration of whether water will be available. Developers build homes and rely on government to find and deliver water to the new residents. Farmers grow water-intensive crops, such as alfalfa, during the summer in the California desert, even though the value of the crops (which are based in some cases on government price supports) is only a fraction of the value of water in alternative uses.

In the book’s most interesting chapters, the author describes the many interrelated uses of water, illustrating a complexity that exceeds the capacity for planning. For example, many readers may know that household use of water, even for lawn watering, represents a relatively small component of overall water use, especially as compared with agricultural use. But water is also an important input in a number of other industries. Energy producers use large quantities of water, both for hydroelectric production and to cool conventional and nuclear power plants. Electricity production uses 140,000 billion gallons of water a day, and although much of this use is non-consumptive, this large amount of water must be available for production to proceed (p. 60). Approval to build two new nuclear power plants in the Southeast was recently denied owing to insufficient stream flows in the Savannah River (p. 32). Ethanol production also requires vast quantities of water, both to grow corn and in refining. California hopes to produce 1.0 billion gallons of ethanol per year, but this production will require 2.5 trillion gallons of water annually for irrigation, the equivalent of all of the water from the Sacramento and San Joaquin rivers that goes to cities in Southern California and farmers in the Central Valley (p. 55). Minnesota hopes to become a center of ethanol refining, but the Land of 10,000 Lakes lacks sufficient water to operate more than a handful of refineries (p. 54). Internet servers and computers use surprisingly large amounts of water for cooling. For example, Google spends one dollar on air conditioning for every dollar spent on electricity to power server farms; one server farm in Virginia uses 13.5 million gallons of water per day (p. 58).

Glennon provides numerous examples of profligate water use that reflects a lack of incentive to conserve because the price does not reflect true marginal cost. However, he also provides numerous examples of innovative ways people conserve water when necessary. He begins the book with an account of Las Vegas, a metropolis in the middle of the desert. This city’s casinos are popularly seen as extreme water wasters. Yet the Bellagio’s fountains use water from wells that had irrigated the golf course previously on the site, and the entire hotel uses less water than the golf course did. The pirate lagoon at Treasure Island is filled with water from the hotel’s sinks and showers. From smart irrigation and smart sprinkler systems to ultra-low-flush toilets to composting toilets to rainwater harvesting, people have discovered a surprising number of options to reduce water use even given the weak incentives for conservation.

So far so good. However, the book contains several troubling inconsistencies, which foreshadow subsequent weaknesses. For example, Glennon criticizes the popularity of bottled and filtered water (pp. 43–49), concluding that the “most subtle, but perhaps most serious, effect of the bottled water craze is that the marketing of bottled water may erode public confidence in and support for our public water supply systems” (p. 48). The clear implication is that municipal water in the United States is safe, but then he produces a laundry list of instances of polluted drinking water and concludes, “Water pollution is an acute national problem that threatens our existing water supply” (p. 76).

Another troubling point is Glennon’s insistence on characterizing profligate use of water as necessarily inefficient. Value is subjective, and it may be that many Americans would be willing to pay more than they do for green lawns or a high-flush toilet. In chapter 2, Glennon documents some extravagant uses of water and describes them as “folly” and “ridiculous.” I admit that I do not plan to buy the Kohler Body Spa ten-jet tower that sells for more than $6,000, delivers 80 gallons of water per minute, and requires multiple 100-gallon hot-water tanks, but some people likely would buy it even if they have to pay the full price for water. That the demand might be highly elastic near a zero price does not imply that the uses are ridiculous; rather, the allocation system is inefficient. Without a market price, we cannot know which extravagant uses of water are truly inefficient. When our politicized water system does look to conservation, it turns to mandates and bans, which do not eliminate inefficiently high uses, but rather high-volume uses.

Perhaps the book’s fundamental weakness is Glennon’s unwillingness to draw what seems to be the logical conclusion from his analysis: that efficiency in water allocation requires the United States to adopt a true market system for water. Economists such as Terry Anderson and Vernon Smith have laid out the dimensions of such a market system (Terry L. Anderson and Donald R. Leal, Free Market Environmentalism, rev. ed. [New York: Palgrave, 200l]; Terry L. Anderson and Pamela S. Snyder, Water Markets: Priming the Invisible Pump [Washington, D.C.: Cato Institute, 1997]). This system would involve full, tradable rights to surface water, “ownership” of groundwater, an end to federally subsidized water projects, and full-cost pricing of water delivered to users. Glennon certainly accepts that the country needs some of the features of a market, and his proposed reforms include pricing and metering use and negotiated water transfers, but he envisions these measures as appendages to a public system. He seems to have an unshakable faith in politicized resource allocation. In chapter 13, he describes the failure of public water systems to invest in maintenance and improvements over the years, resulting in water-main breaks, aging treatment plants, and the continued joining of storm and sanitary sewers. The pattern is not surprising: “No politician wants to stand for reelection on the slogan ‘I overhauled the sewer system!’” (p. 213), a conclusion that certainly accords with public-choice analysis. Yet, for Glennon, the solution nevertheless lies in political action: “Only the federal government can lead such an initiative. . . . We need to devote substantial resources to finding sustainable solutions to the problem of human waste disposal” (p. 218). He fails to recognize that politicized resource allocation has brought about the present unsustainable society.

Despite the book’s weaknesses, however, it contains a wealth of interesting information on a policy issue of continuing importance. The details of Glennon’s diagnosis, including the systemic lack of incentives and the absence of a profit motive in resource allocation, are on the mark. The proposed solution of infusing the politicized system with more marketlike features may not solve the nation’s water problems, but it represents a step in the right direction.

Daniel S. Sutter
University of Texas—Pan American
Energy and the EnvironmentNatural ResourcesWater Resources
Subscribe Buy This Issue Get the App